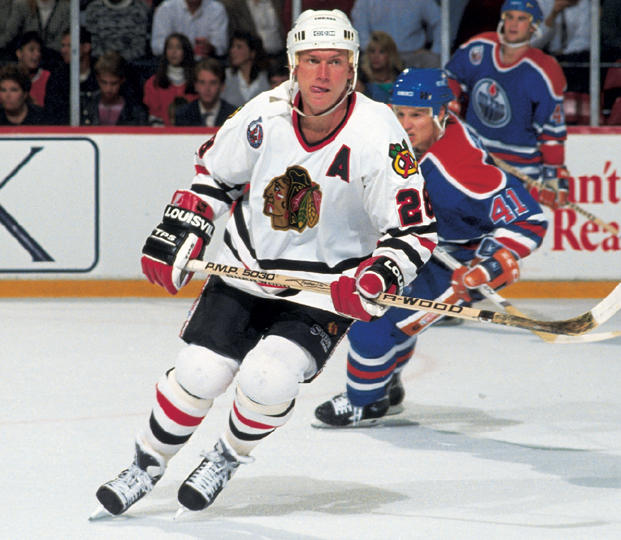 This isn’t the first time we’ve banged the drum for one of the Blackhawks’ all-time greats to get into the Hockey Hall of Fame. But hopefully it’s the last.

Steve Larmer should be in the Hall already. Looking ahead 12 months, he might have a chance in 2015.

On Halloween, Ken Campbell at The Hockey News wrote an interesting article about Marian Hossa reaching 1,000 career points. In that piece, he makes a comparison we have for years regarding Hossa; Campbell notes the similarities between Hossa and Larmer, using Larmer to make the case that Hossa might not be one of the all-time greats.

I submit that the argument made by Campbell should only support the reality that Larmer should be in the Hall of Fame already.

When Hossa reached 1,000 points earlier this season, he became only the 24th right wing in league history to hit the benchmark. Only two other active right wings – Jaromir Jagr and Jarome Iginla – have passed 1,000 career regular season points. (Note: Daniel Alfredsson has not yet retired, but isn’t in the league currently.)

Consider, for a moment, the right wings in NHL history who averaged at least one full point per game for more than 1,000 games in their career:

Of the eight players on this list with Larmer who are eligible for the Hall, only Fleury and Mogilny haven’t gone in yet. And in a few short years, Selanne will take his rightful place with the all-time greats without a doubt.

It’s worth noting this weekend that Mike Modano, arguably the greatest American born forward of all-time, averaged 0.92 points per game.

Perhaps the greatest case for Larmer to get into the Hall was the induction of Dino Ciccarelli in 2010. Both right wings, both with more than 1,000 points, it’s easy to make a case that Larmer had the better career.

In 2015, the group of players eligible to enter the Hall isn’t as strong as some other recent years.

Niklas Lidstrom is the only no-doubt first ballot Hall of Famer eligible next season. But behind Lidstrom, who else would get in next year?

CBS Sports put together an interesting list. Sergei Federov is certainly a name that deserves to be in the Hall with his former teammate.

But looking at the rest of the list CBS put together, is there anyone there other than Lidstrom or Federov that should be in the Hall ahead of Larmer?

The longevity of Mark Recchi is worthy of enshrinement at some point. Eric Lindros, like Larmer, didn’t have an incredibly long career. Lindros and Jeremy Roenick were two of the more dynamic offensive forces of the 1990s, but both have been on the ballot before and, like Larmer, continue to wait.

One player who may be eligible who would likely get in is Chris Pronger… even though he’s currently on a team’s payroll while working for the league.

There are a lot of great players still waiting to get into the Hockey Hall of Fame. With Dominik Hasek, Mike Modano, Peter Forsberg, Rob Blake and Pat Burns entering the Hall this weekend, we can begin looking ahead to 2015 – the year when Larmer should get in.