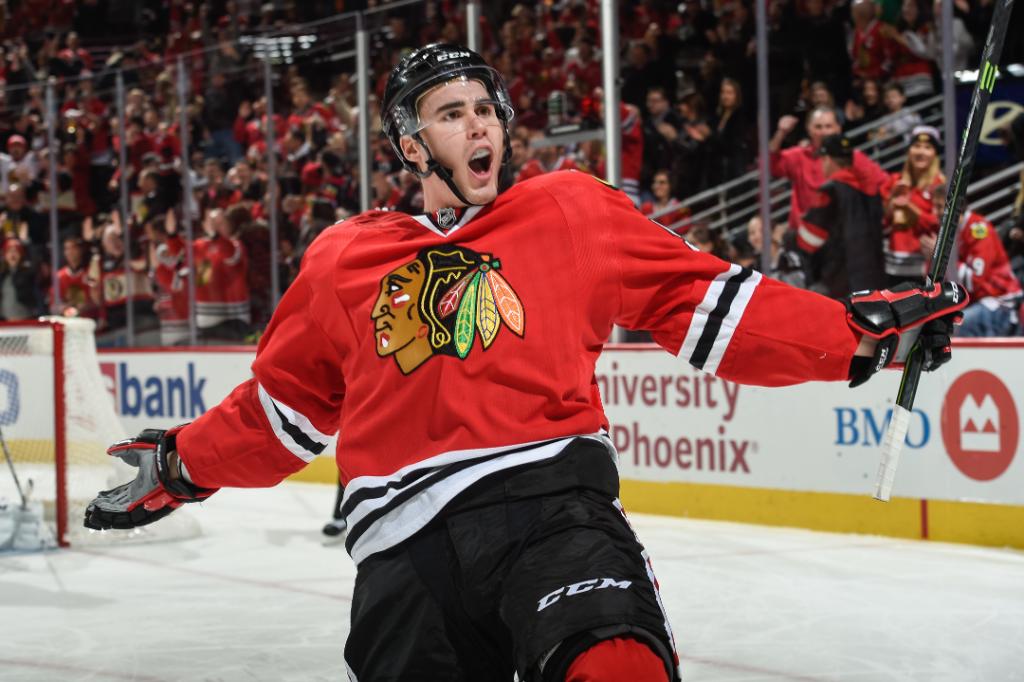 Bryan Bickell and Rob Scuderi were the healthy scratches on Sunday evening against Colorado, meaning Michal Rozsival and Brandon Mashinter were active. And, as usually, those names were met with a collective groan from fans seeing the lineup against a hot Avalanche team.

At 8:27 into the first, after a Dennis Rasmussen faceoff win and quick shot on net, Mashinter gave the Blackhawks a 1-0 lead. He parked himself on the doorstep and tapped in a loose rebound for his second career NHL goal.

It was Mashinter’s second goal since Thanksgiving, one more than Marian Hossa had scored. Because of course.

Ryan Garbutt actually finished the opening 20 minutes tied for the team lead with four shots on net as the Hawks’ fourth line was more active than they had been recently. Garbutt and Rasmussen both picked assists on Mashinter’s goal.

Not to be shown up by Mashinter’s brilliance, Patrick Kane did was he usually does nearly eight minutes later.

With Kane’s goal, the Hawks had scored twice on 15 shots against a goaltender who, before this season, had owned them.

Given the footnote about Hossa that quickly circulated social media after Mashinter scored in the first, of course the Blackhawks veteran star got back on track. It took just 99 seconds into the second period for Hossa to score his sixth of the season and extend the lead to 3-0. The goal is the 492nd of Hossa’s career.

Matt Duchene slipped a shot through three bodies and past Corey Crawford at 5:10 into the second to break up the shutout. The goal was Duchene’s 20th of the season.

Only 4:08 later, Duchene scored his 21st of the season to get Colorado within one. The Avs had all of the momentum in the middle stages of the second period, and the game was nearly tied when Mikhail Grigorenko had a great scoring chance stopped by Crawford.

Exactly 12 minutes into the third, Gabriel Landeskog was sent to the box for hooking Phillip Danault and the Hawks took advantage of the game’s first power play. Kane scored his second of the night and 25th of the season 25 seconds into the power play to extend the Hawks lead back to two.

With Pickard in the game, the Blackhawks wasted no time getting back on the attack. Jonathan Toews fired a missile past the poor kid for his 15th of the season to push the score to 5-2 Hawks only 2:06 into Pickard’s night.

Rookie defenseman Erik Gustafsson picked up his sixth assist in only his 13th game on Toews’ goal, but it was a beautiful, balanced attack for Chicago. On the Blackhawks first five goals, 10 different skaters were credited with assists.

The Hawks were flying and it didn’t stop with a three-goal lead. Hossa scored for a second time – his 493rd – at 18:42 into the second to make the score 6-2, and the Avs were crumbling. Nathan MacKinnon took an unsportsmanlike penalty in the wake of Hossa’s second goal, giving the Hawks another power play opportunity as the second period came to a close.

Chicago’s top line was incredible in the middle period. They combined for seven points in the second: Toews (one goal, two assists), Hossa (two goals) and Andrew Shaw (two assists). Shaw was also credited with a team-leading three hits through the opening 40 minutes.

Even with the offensive explosion in the later stages of the second, Crawford’s game was on point and held the Avs at two goals. Every time Colorado had a great chance to keep the score close, Crawford slammed the door and the puck flew the opposite direction.

On the other end of the ice, Roy decided he needed an extra attacker to get back in the game so he pulled Pickard – with almost 11 minutes left in regulation. Soon after, the Avs got a power play with Rasmussen in the box and they opted to keep Pickard on the bench for a 6-on-4 advantage, but still weren’t able to convert as Crawford made a few huge saves.

MacKinnon was able to beat Crawford at 15:02, making the score 6-3. Duchene picked up an assist on the play, giving him three points in a really good effort in spite of the score. He played heavy minutes and was even in a lopsided game, factoring in all three Avs scores.

Crawford finished the night with 34 impressive saves against 37 shots.

Only five Blackhawks skaters failed to register a point. One of those poor souls was Duncan Keith, who was playing the 800th career regular season game in his brilliant, Hall of Fame career.

The Hawks are back in action against the new-look Nashville Predators with Ryan Johansen in the lineup on Tuesday night.