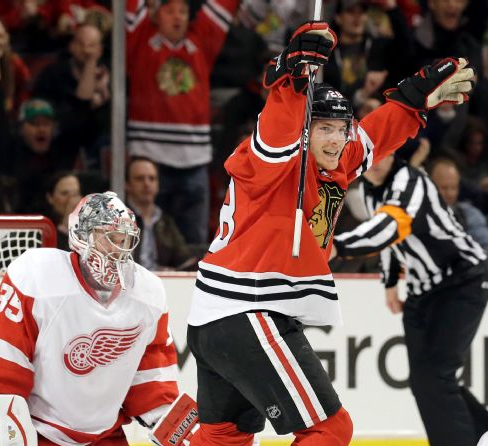 Marian Hossa returned from injury and scored his 25th goal of the season as the Hawks handled Detroit 3-1 on Sunday night.

Nick Leddy opened the scoring with a power play marker in the second period. It was his seventh of the season, with assists going to Hossa and Ben Smith. A little more than six minutes later, Guztav Nyqvist scored a power play goal for the Wings, shooting the puck off Brent Seabrook’s skates and past Corey Crawford. Smith scored with 14 seconds left in the middle frame to give the Hawks a 2-1 lead.

With Hossa back, coach Joel Quenneville threw his lines into a blender once again and Smith responded to a great opportunity. Quenneville started the game with Smith between Patrick Kane and Bryan Bickell, and he played well with two points and winning seven of 10 faceoffs.

In the third period, Hossa exploded and beat Jimmy Howard to extend the Hawks’ lead to 3-1. Later in the third, he undressed Johan Franzen and fed Jonathan Toews for a short-handed goal to make the score 4-1. Hossa finished the night with three points, one blocked shot and two takeaways.

Duncan Keith registered two assists in the game, giving him 50 on the season.

There was a lot to be happy about in the game, but Brandon Saad disappeared late in the second period and did not return for the third. Brandon Bollig saw increased ice time in the third while Saad was out and played effectively, leading the team with five hits.

After the game, Quenneville said Saad, “seemed all right. I don’t think it’s too serious but we’ll have a better idea tomorrow.” The injury was labeled upper-body.

Johnny Oduya led the team with four blocked shots, while Michal Handzus contributed three. The Hawks allowed only 20 shots to get to Corey Crawford, blocking 11 on the night. Crawford was very good throughout the game, making 19 stops for his 26th win of the campaign.

Jimmy Howard allowed four goals against 30 shots in the loss.

Chicago will play in Philadelphia on Tuesday night before hosting St. Louis on Wednesday night. The Blues will be without forward Vladimir Tarasenko for at least six weeks; a hand injury suffered against Nashville this weekend will require surgery.