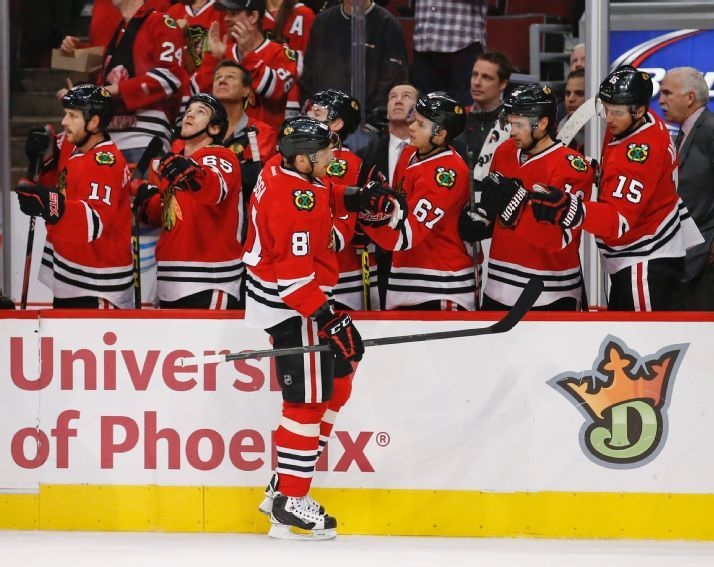 On a night that included a wide range of emotions, the Blackhawks were able to step on the gas and earn a big regulation victory against a division rival on Sunday afternoon at the United Center.

The ice surface was awful, but the play was what fans had been asking for all year. And the Hawks successfully started a huge four-game stretch confidently. We saw a scare, confusion and some excitement in the opening 20 minutes.

The early scare came in the middle of the first period when Trevor van Riemsdyk took a shot off the knee. He stayed down and needed to be helped off the ice; given the injury issues he’s dealt with over the last two-plus seasons, there was a fear he would miss significant time again. Thankfully, he returned to the bench later in the period.

It appeared Marcus Kruger scored the game’s opening goal, but the review officials determined that the puck hitting a player’s skate while he’s slammed to the ice is enough to call it a “distinct kicking motion.” The goal was waived off to the dismay of the folks in attendance.

A couple minutes later, however, Marian Hossa displayed a distinct scoring motion as he put the puck past Michael Hutchinson to give the Blackhawks a 1-0 lead late in the period.

Bryan Bickell was recalled earlier on Sunday and brought a physical presence the lineup had lacked since he disappeared (in October 2013). Inside the final minute of the first period, Bickell lowered the boom on Dustin Byfuglien with a huge, legal hit that send the former Hawks forward/defenseman flying. The Jets jumped Bickell after the play, but the only penalty was assessed to Byfuglien for roughing.

When the opening 20 minutes came to a close, the shots were 11 for both teams, the biggest hit had actually been delivered by Chicago, and the scoreboard had the Hawks on top.

Unfortunately, the second period had some of the same emotions without the positive results.

Chris Thorburn apparently scored a goal 5:34 into the second period to tie the game. The skaters didn’t see it. Thorburn didn’t see it; he kept playing. The fans in the seats didn’t see it. But the eye in the sky did and almost two minutes later there was a review and a goal was awarded to the visitors.

Thorburn was involved in a scary incident later in the period, as an incidental collision left Trevor Daley in bad shape on the ice. The Hawks brought out a backboard to help the veteran defenseman off the ice, but he was able to get to his feet and, with the help of a trainer and Duncan Keith, made his way to the bench and eventually the dressing room. He did not return, and may miss an extended period of time.

The second period ended with the Jets holding momentum, a tie score and the Hawks skating with only five defensemen. Chicago has struggled when starting a third period tied this year, but that changed on Sunday.

With Bickell back in the lineup, the Hawks finally looked like a team that could roll four lines. Chicago was physical all night, and had arguably their best night from every line other than Kane-Anisimov-Panarin in the last six weeks.

There was some concern that the Hawks, who were clearly deflated after the Daley injury, would come out with the spark they showed in the first. But they answered the bell with a strong attack that netted a big early goal.

Only 21 seconds into the third, the top line scored for a second time on the night as Teuvo Teravainen deposited the eventual game-winning score.

Hossa picked up his second point of the night with an assist on the Teravinen goal. Duncan Keith and Brent Seabrook had assists on the opening two goals.

From there, the Hawks controlled the majority of the third. Chicago out-shot Winnipeg 12-8 in the final period and, with Corey Crawford playing a fabulous game between the pipes, the only question down the stretch was whether or not Kane would extend his point streak.

With Hutchinson on the bench for the extra attacker, Kane swatted a pass up ice to Panarin who scored into the empty net.

The assist with 1:46 left in regulation gave Kane a new franchise record with points in 22 consecutive games. Niklas Hjalmarsson picked up the second assist on the goal, the ninth of the season for Panarin.

When the final horn sounded, there was a lot to like from the late afternoon performance.

Ryan Garbutt stuffed the box score with five hits and five shots on net; with Kruger and Andrew Desjardins, that line had a terrific night. Kruger blocked three shots and was credited with three hits, and Desjardins was credited with four hits as well.

Bickell skated only 7:03 but was credited with seven hits and one takeaway. Tanner Kero spent the night with Bickell and Andrew Shaw but only skated 7:25. Shaw took the majority of the faceoffs with that line, winning four of ten. He was also credited with five hits.

With Daley missing the second half of the game, ice time was spread around the blue line. Chicago’s defensemen were credited with three assists on three goals, production we have been wanting to see all year. van Riemsdyk skated more than 18 minutes even after missing a big part of the first period after getting hurt himself, and he finished the night well again with two blocks, one hit and one takeaway.

Crawford made 30 saves to earn the victory. He was big when he needed to be, and the only goal he allowed wasn’t seen by any of the nearly-22,000 in attendance.

Brandon Mashinter and Marko Dano were healthy scratches up front. David Rundblad is indeed still alive; he was on the ice for warm-ups but disappeared when the game started once again.

It will be interesting to see if Rundblad gets on the ice if Daley misses an extended period of time or if the Blackhawks bring back one of Erik Gustafsson or Viktor Svedberg.

The Hawks are back on the United Center ice on Tuesday night when the Nashville Predators visit town.