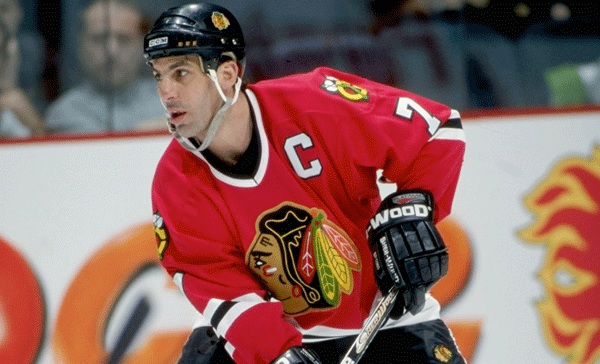 On Friday night, the Blackhawks will celebrate the contributions of Chris Chelios to the organization.

At the preseason game against Detroit when this night was announced, the news was greeted with a mixed reaction. The reaction wasn’t a surprise, considering it was just days earlier that Chelios had accepted a position in the front office of the Red Wings and the end of Chelios’ career (pre-Wolves/Thrashers) was spent in a Detroit sweater.

And, as Blackhawks fans do, it’s the custom to tell any/everything associated with the Red Wings that they suck.

But on Friday night, the greeting Chelios receives should be different.

On June 26, 1990 the Chicago Blackhawks acquired Chelios in a trade that didn’t sit well with many fans. He came to the Hawks from Montreal with a second round draft pick in exchange for Denis Savard. Even though Chelios had won a Norris Trophy in Montreal, and was a Chicago kid coming home, the deal moving Savard out of town wasn’t popular with everyone at the Chicago Stadium. Once he stepped on the ice, though, he was everything the Blackhawks needed in a captain.

Before Chelios arrived, the Blackhawks hadn’t played for the Stanley Cup since 1973. However, with Jeremy Roenick leading the scoring and Ed Belfour between the pipes, the Blackhawks returned to the Finals after the 1991-92 season. On that team, Chelios and Steve Larmer were alternate captains with Dirk Graham wearing the “C.”

(Oddly enough, Scotty Bowman was the coach of both the 1973 Canadiens and the 1992 Pittsburgh Penguins.) Fans memories are short, and most only remember that Chelios went on to win some hardware with the hated Red Wings. What many fans forget is that Chelios had the Red Wings on a no-trade list for most of his time in Chicago, and only relented to the trade when management had flushed the organization so far down the toilet that a 37-year-old Chelios accepted a deal out of Chicago in March of 1999.

Let’s also not hold against Chelios that the Blackhawks didn’t do anything with the two first round picks they got from Detroit in the trade. If you’re old enough to remember what was going on with the organization in the late-90s and early parts of the 2000s, it was far from Chelios’ fault that the team was in the crapper.

When Chelios accepted the trade out of town, two men I consider horsemen of the apocalypse were running the Blackhawks into the ground.

Larmer was dealt to Hartford for almost nothing early in the 1993-94 season. They gave away Roenick in August of 1996. Belfour was dealt during the 1996-97 season for essentially nothing. In fact, the only trade in the dismantling that turned out relatively well was when Dominik Hasek was dealt to Buffalo for a draft pick that turned into Eric Daze.

What we should remember is that Chelios made the All Star team every season he was in Chicago until the bitter end. He played in seven All Star Games as a member of the Hawks.

We should remember that Chelios represented the USA in 1996 World Cup of Hockey and was captain of the USA’s team at the 1998 Olympics – as a member of the Blackhawks.

We should remember that he is one of only four players in Blackhawks history to win the Norris Trophy as the league’s best defenseman (Pierre Pilote, Doug Wilson and Duncan Keith are the others). Only Chelios and Pilote have more than one Norris in a Chicago sweater.

We should remember that Chelios was, from 1995-99, one of the most respected captains in the history of the organization.

We should remember that Chelios is the Blackhawks’ all-time leader with 1,495 penalty minutes.

Chelios ranks third in Blackhawks history in scoring among defensemen with 487 points. He scored 92 goals, 13 of which were game-winners, and scored .733 points per game as a member of the Hawks. He is a Hall of Famer, and a large part of his credentials came in a Hawks sweater.

Let’s put his Chicago career into perspective against the two current star defenseman for the Hawks:

As you can see, Chelios was a prime-time player, and both the Chicago Stadium and the new United Center used to roar when he was on the ice.

When he steps back onto the ice on Friday night, the roar should return. Chelios did too much to win the love and respect of Hawks fans while he was here to be treated with any less love while being honored. His number may be on Seabrook’s back now, but his name should stay in a special place in the hearts of Hawks fans.

Why? Because he’s still a Blackhawks fan.

This story is from Bob Verdi’s piece on Chelios from the Blackhawks website.

Chris Chelios went to the parade too. When the Blackhawks won the Stanley Cup last June, he was working for the Detroit Red Wings, and he still is. But if you were born in Chicago, and you played hockey in Chicago, and you call Chicago home, you can’t pass up a parade in Chicago, can you?

“I was back at our house in Michigan, and I told my wife, Tracee, I think I’ll go check it out,” Chelios recalled. “She understood. She looked at me and said, ‘You’re nuts. You bleed Chicago. Go ahead.’ So I flew in, took up a spot on Michigan Avenue along with about 2 million other people, and it was the greatest thing I’ve ever seen.

“When we won the Cup in Montreal, I thought that was something. But the parade in the Loop, it was twice as good. Perfect. Beautiful. And after Tracee saw the highlights on TV, she didn’t think I was so nuts. A few people recognized me. Sunglasses can’t hide this nose. But they were friendly because they were in a good mood. I don’t know about my night in the United Center. I’ll probably be booed, don’t you think?”

Please, Hawks fans. When the old #7 steps on the ice, treat him the way we did the last time he did wearing the Indian Head. He earned it. 16 thoughts on “How Blackhawks Fans Should Remember Chris Chelios”