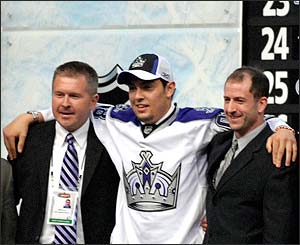 The Kings won the Stanley Cup two short years ago, advanced to the Conference Final last season and are have dominated the Blackhawks thus far in this year’s Conference Final. Looking up and down their roster, if they can stay healthy, the Kings should be around for a while.

So how did the Kings build their roster? Patrick O’Sullivan was the 56th overall selection in 2003 by the Minnesota Wild. He was traded with the pick used to select Trevor Lewis to LA for Pavol Demitra in 2006, and was traded by the Kings to Carolina with a 2nd round pick for Justin Williams in 2009.

In 2010, O’Sullivan was traded to Phoenix by the Oilers for Jim Vandermeer – the same Vandermeer who was involved in two significant Chicago trades.

In 2004, Vandermeer was traded to Chicago with Colin Fraser and the second round pick eventually used on Bryan Bickell for Alexei Zhamnov and a 4th round pick in 2004. In 2007, the Hawks traded Vandermeer back to Philly for Ben Eager, who won the Cup in Chicago in 2010.

13 thoughts on “How The Kings Were Built”