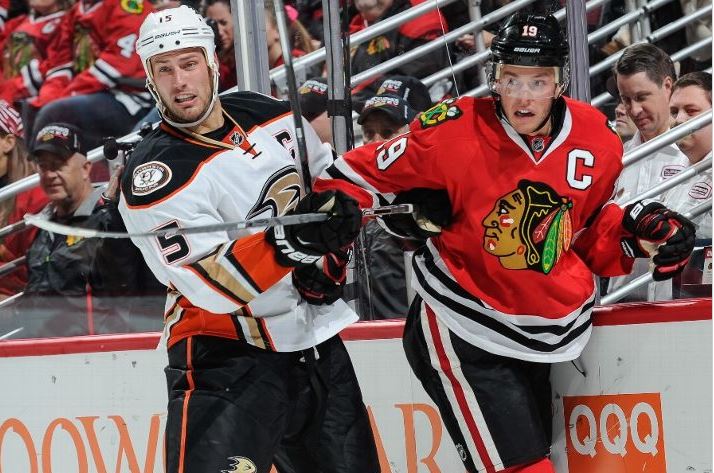 As the Blackhawks re-enter a season or rebuilding, there’s been a lot of talk about the futures of the two centerpiece forwards of the organization over the past 15 years: Patrick Kane and Jonathan Toews.

Fans of professional sports have become jaded to the concept that “it’s a business.” And maybe no organization in the NHL has forced their fans to be accustomed to that reality than the Chicago Blackhawks, especially over the past 35 years. We’ve watched as all-stars and future Hall of Famers have been traded away for various reasons.

If we want to start with the trade that sent Denis Savard to Montreal, we’ve watched as Savard, Steve Larmer, Jeremy Roenick, Ed Belfour, Chris Chelios and, more recently, Duncan Keith wore a different jersey. Only Savard came “home” to finish his career on the ice.

The Blackhawks have traded the contracts of Marian Hossa and Brent Seabrook to make the cap work easier, but the last time we saw them on the ice was as Blackhawks. But the trades of their contracts meant we never got to say a formal goodbye to a superstar on the ice. We have never had the victory lap to close out a career. We’ve never known a face of the franchise was all done.

This weekend, I found myself envious of the fans in Anaheim saying goodbye to the face of their franchise: Ryan Getzlaf.

Getzlaf had a marvelous career, all of it in Anaheim. He was a big part of the community, but on the ice he was the player who defined almost two decades of hockey for the club. He was the constant; Teemu Selanne was the flashy star, Corey Perry won some individual awards but Getzlaf was there throughout.

Now he’s hanging up his skates. And the fans who have praised — and criticized — his play on the ice during his career were granted one last chance to show their appreciation for his efforts.

The Blackhawks have Kane and Toews under contract for one more year, and their careers are at very different places today. Toews is still working his way back from the health issues the led to him being off the ice for all of last year, and he’s struggled at times this season. Kane is still playing at a high level and reminds us regularly that he’s an elite, all-time great player.

But on July 1, the Blackhawks can start thinking about the future for both. Is an extension in the future for either/both? They’ve signed identical contracts at every step of their careers, but that time is in the past. The dollars they’ll be able to ask for if they reach free agency in 2023 will be different based on their recent performance. And the value the organization places on them will also be different.

Toews is the longest tenured captain in the history of the franchise. Kane is putting up numbers we haven’t seen since Bobby Hull and Stan Mikita were forces for the Hawks nearly 60 years ago. Coupled with the longevity of his tenure in Chicago, Kane is in the conversation to be considered the best forward in franchise history (I would still lean to Mikita, but the gap is closing).

This weekend, I found myself longing to have a victory lap from at least one of them.

As a fan of the Chicago Blackhawks, far too many times we’ve watched the “thank you” video tributes. Niklas Hjalmarsson, Andrew Shaw, Brandon Saad, Artemi Panarin… so many guys in the past decade that were moved for financial reasons. But Kane and Toews have been the constants. And they’re both still playing.

We don’t know how much longer Toews or Kane want to play. But there’s a big part of me that would love to see every game of their careers played with the Indian head on their chest. And watching the farewell to Getzlaf this weekend, my heart wants it more than the brain that understands that, at the end of the day, this is is a business.