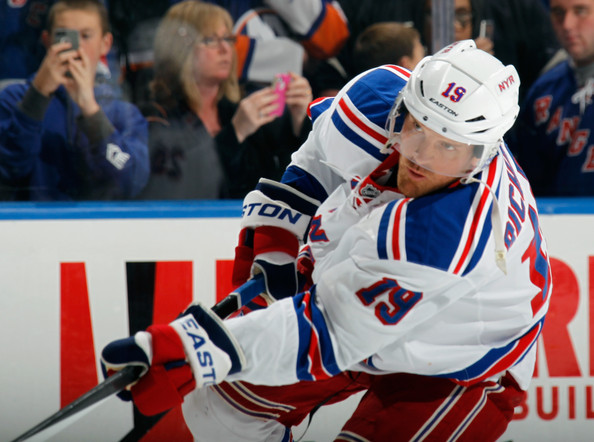 Who did Richards play with in New York last year? And who will he skate with in Chicago? Let’s look at the stats of a forward with whom Richards spent the most time during last year’s regular season, and compare them with a player he might spend significant time with this coming year.

Not very different… until you look at the rest of the picture. Player A is Carl Hagelin. Richards spent 51.9 percent of his regular season even-strength ice time with Hagelin, the most of any Rangers forward.

Player B is Patrick Kane, the Hawks’ young superstar who figures to see a lot of Richards if/when coach Joel Quenneville splits Kane and Jonathan Toews this season.

Think Richards is thrilled by the potential of skating with a player of Kane’s caliber?

The feeling is undoubtedly mutual.

Kane was a point-per-game player last season in spite of skating with (too) many centers. During the 2013-14 regular season, Kane spent 29.6 percent of his even strength ice time with Michal Handzus, the second-highest total of any Kane linemate (Brandon Saad – 32.5).

Handzus scored four goals and added 12 assists in 59 games. He won 49.6 percent of his faceoffs in his final season in Chicago.

Last season, on an offensively challenged Rangers team, Richards scored 20 goals with 31 assists in 82 games. He averaged 18:41 on the ice per night. He won 49.8 percent of his faceoffs in New York.

35 thoughts on “Impact Player: What Brad Richards Means In Chicago”