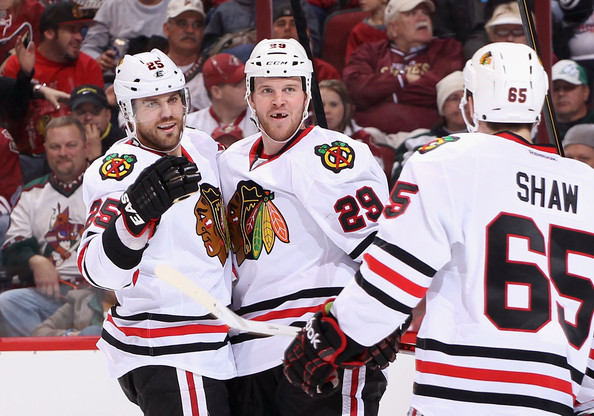 The Chicago Blackhawks stayed on top of the NHL with a strong victory on Friday night. Chicago showed San Jose and the rest of the league why they have yet to lose a game in regulation through 14 games once again, as the team’s depth was on display.

Antti Niemi has allowed more than three goals only twice in 11 starts this season, and both occasions have come against his former teammates.

But on Friday night, it wasn’t the Hawks’ superstars leading the way.

In fact, the only top-six forward to score against Niemi on Friday night was… Dave Bolland. It was Bolland’s fifth goal in 13 games.

Throughout the early going this season, the Hawks have received key performances from role players.

Seven Blackhawks have already scored at least three goals this year, and Patrick Sharp isn’t one of them. Indeed, the Blackhawks’ bottom-six forwards have scored 12 goals through 14 games this year; the Nashville Predators have scored only 26 as a team.

Chicago’s roster has seen many players step into different roles this year as well, which has made immediate impacts in more areas than scoring.

This is the first season since 2007-08 that Bolland, when healthy, hasn’t been among the Hawks’ short-handed ice time leaders. In each of the last four regular seasons, Bolland has been one of the top-three Blackhawks in average short-handed ice time per game. So far, Bolland ranks fifth among Hawks’ forwards in that category this year at only 1:18 per game; his lowest average over the last four years was 1:46 per night.

Entering Saturday, Kruger is tied for 21st in the NHL averaging 2:50 per game in short-handed ice time, while Michael Frolik is averaging 2:35 on PK duty. And their work on that special teams unit has been exceptional; Kruger and Frolik have each been on the ice for only two opponent powerplay goals this year in over 76 combined short-handed minutes.

After two years of fans (and probably his bosses) begging for Bryan Bickell to be more physical, he has finally shown a consistent willingness to use his 245-pound body this year. Through Friday night, Bickell is tied for 35th among NHL forwards with 31 hits.

Three of the Hawks’ top four hitters this season have been from their bottom-six forwards. Bickell leads the team, followed by Brent Seabrook (22). But Shaw (21) and Viktor Stalberg (17) fill out the team’s top four in the category, the only four on the team averaging more than one hit per game.

Surprisingly, Bickell has also been a good thief this year as well. With 10 takeaways already this year, Bickell is tied for 22nd among all forwards with some impressive names including Jeff Skinner, Kyle Turris, Jordan Eberle and former Blackhawk Troy Brouwer.

In fact, Brouwer and Bickell have been fair comparisons early this season.

Through 14 games each, consider these numbers for Bickell and Brouwer:

Coach Joel Quenneville has shown confidence in all four lines, and his faith has been rewarded early this season. We’ve already looked at how the ice time per game for Seabrook and Duncan Keith has come down from recent seasons, and the same is true this year for the Hawks’ top forwards.

Chicago’s depth has been critical in their early season success, and continued contributions should keep the Hawks in contention. 9 thoughts on “In Focus: Blackhawks Forward Depth Making An Impact”