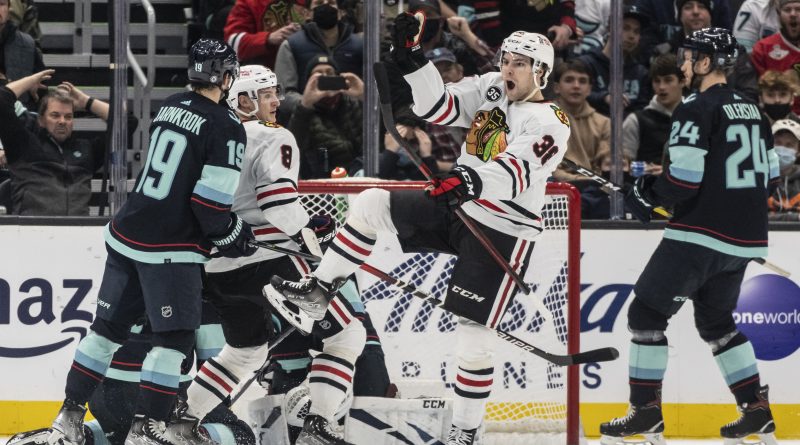 Marc-André Fleury got yet another start in net for the Blackhawks in a matinee start in Seattle on Monday. Mike Hardman was welcomed back into the NHL lineup as well. And, though he wasn’t able to join the team in Seattle in time for the game, Seth Jones cleared COVID protocol.

Meanwhile, the Kraken came in riding a six-game losing streak.

The first period was slower and more methodical than the game against Anaheim the other night. The Kraken out-shot the Hawks 8-5 in the first period and there were plenty of shot blocks and deflections as well.

Inside the final two minutes of the first, Hardman hammered Jared McCann with a clean hit in the neutral zone. Will Borgen dropped the gloves with Hardman, who tripped on McCann’s stick and took a couple shots to the head as a result before the officials could break up the fight. Borgen got two extra minutes in the box, giving the Blackhawks a power play that resulted in nothing.

It took 12 minutes of the second period for either team to finally get on the board. Erik Gustafsson dressed in place of Jakub Galvas, a move that head coach Derek King said was out of respect to the veteran. Gustafsson showed a flash of the offensive ability that keeps getting him NHL paychecks with a nice pass to Dominik Kubalik for the game’s first goal.

The Blackhawks held the lead for less than three minutes. Vince Dunn scored to tie the game at one at 15:01 into the third.

Dunn did the Hawks a favor and went to the penalty box 48 seconds after scoring and Chicago took advantage. Brandon Hagel knocked in a loose puck to give the Blackhawks a 2-1 lead late in the second.

Chicago out-shot Seattle 16-10 in the second period and took a one-goal lead to the third period.

Unfortunately, an ugly defensive effort from both Jake McCabe and Caleb Jones opened the door for Ryan Donato to score an unassisted goal two minutes into the third to tie the game at two. McCabe was caught completely flat and Jones left his feet in an effort to block a shot but ended up taking out Fleury instead of the puck.

The first half of the third period was more physical and the Hawks kept chasing instead of dictating the flow. Fleury made a save-of-the-week caliber play about nine minutes into the period that had Jordan Eberle’s knees buckled in disbelief behind the net.

With seven minutes left in regulation the Blackhawks were called for a penalty but the Kraken kept the puck for more than 30 more seconds. Riley Stillman took out Jared McCann’s legs and McCann was given a penalty shot after the extended period of Kraken advantage. Thankfully, Fleury slammed the door on McCann to keep the game tied.

Fleury was the only player on the Blackhawks trying to win this game in the final four minutes. Everyone in front of him looked like they desperately needed to get at least one point for overtime. This against a Seattle team that’s playing terrible hockey and had lost six straight coming in. Fleury finished regulation with 31 saves against 33 shots but the skaters in front of him generated almost no offense in the third period; Seattle out-shot Chicago 15-6 in the final period of regulation.

Here’s your reality after 60 minutes of hockey:

Seattle held the puck for the first 79 seconds of overtime but only attempted one shot on Fleury, which he handled easily. Kane, Gustafsson and Alex DeBrincat were stuck on the ice for the entire long shift.

Fleury made a couple more ridiculous saves and it appeared Eberle hit the post inside the final two seconds of OT. Somehow, some way, the game went to a shootout.

The first shooter for each team was shut down. Donato then was able to beat Fleury and Kane shot wide. Joonas Donskoi beat Fleury to win it for Seattle.

Fleury deserved better than the effort he got from the skaters in front of him in the final 25 minutes of this one.

During both the radio and television broadcasts, the Blackhawks and their media partners paid tribute to Les Grobstein who passed away on Sunday.

33 thoughts on “Incredible Fleury Effort Not Enough, Blackhawks Lose To Kraken In SO”