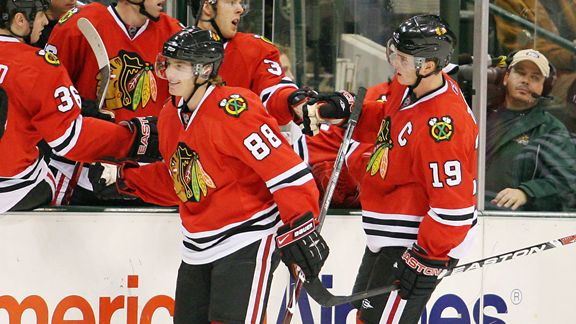 An organization that is coming to be known for doing things right continues to one-up their own benchmarks. Thursday’s press conference, and the reason for it, are just one more notch in the right direction.

At the United Center, the Blackhawks announced the new contracts for Jonathan Toews, Duncan Keith and Patrick Kane on Thursday in a press conference that serves as a wonderful example of how much the organization “gets it.”

The press conference began with a video tribute to the three players. Appropriately, as the video began playing, the voice of Chicago’s own Billy Corrigan came through singing “Today’s the greatest day I’ve ever known,” from the Smashing Pumpkins’ classic. GM Stan Bowman correctly stated that today was a historic day in the history of the Blackhawks organization.

Bowman stated that that ” the plan was to keep our core together for a long time and Jonathan [Toews], Duncan [Keith] and Patrick [Kane] are a major part of that.” Bowman’s effort to keep that core together came in the form of matching five-year, $31.5 million contracts for Toews and Kane, and a 13-year, $72 million deal for Keith.

One reporter asked the three if they realized how good they have it, playing in front of roaring packed buildings every home game, and now becoming the best team in Chicago across all professional sports. Toews responded that it’s fun to meet and spend time with guys in other sports, but it was Keith that drove home the evolution of the organization.

Keith made his Blackhawks debut in 2005-06, when the Hawks were regularly filling between 7-9,000 seats. Kane and Toews have been the poster boys for the evolution of the Hawks organization, but Keith said it’s “amazing to see the turnaround… how much fun it is to play here.” Keith also said he’s happy to have signed such a long term deal with the team, and he is confident that the team will win a championship during his tenure. Keith said he always envisioned playing his entire career for the Blackhawks, and now he’ll get that chance.

When asked why it was important to announce all three deals together, Keith said it was because no single player is bigger than the team. It was overwhelmingly apparent that all three of these players are committed to the Indian and their teammates. Both Toews and Kane said in their remarks that they’re new contract is for five more years, but that shouldn’t be the end of their Chicago careers. And Keith made special mention of his partner on the blue line, Brent Seabrook.

The Blackhawks did not, however, address the salary cap issue. One question was presented to the players, but Kane simply said they don’t think too much about the business end of things and just focus on the ice. There has been little done publically to clarify how the tagging situation for the Hawks would play a role in these three contracts, and whether or not a move needed to be made to formally make these deals a reality.

It is clear, though, that money will have to be moved off next year’s payroll to put a complete roster on the ice under the projected salary cap. The speculation will be in high gear as the coming days and months move along toward the trade deadline, but for now Hawks fans can sit back, put their feet up and enjoy a cold one in honor of a great day in Chicago hockey history. All three players stressed that today was about the team, and winning the Stanley Cup. Now that they’ll be part of the team for the better part of the coming decade, the Cup dream might be closer to becoming reality than at any time since 1961.