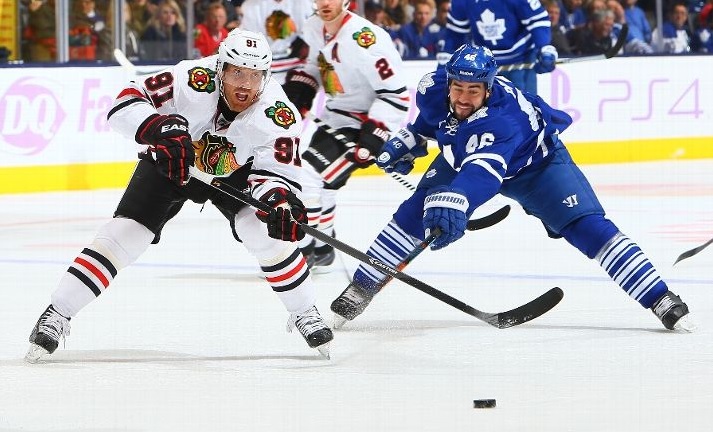 Toronto netminder James Reimer was able to hold strong against a big third period rush from the Blackhawks, and the Leafs escaped with a 3-2 victory. Reimer faced 26 shots in the third period and kept them all out of the net to earn a big victory for the hosts. In the game, Reimer made 45 saves.

Chicago’s power play was as good as it’s been all season, and the Hawks’ two goals both came with an advantage. Brad Richards scored his first goal as a member of the Hawks in the first period, and Brent Seabrook added his second of the season in the second period.

Unfortunately, the Hawks weren’t able to score at even strength and their inability to control the puck cost them two points.

Johnny Oduya had an awful night. He was involved in turnovers that led to Toronto’s second and third goals, and later went to the box for slashing after he was badly beaten by Phil Kessel on a rush. Oduya was limited to 17:05 in the game as coach Joel Quenneville mixed up his defensive pairs and compensated for Oduya’s terrible performance.

Oduya’s partner, Niklas Hjalmarsson, had a painful night. He got hit in the face with the puck late in the second period and left the ice bleeding. He returned for the start of the third period, but limped off at the end of a Toronto power play after getting hit with a shot in an unprotected area. Hjalmarsson skated 17:46 in the game and somehow was only credited with two blocked shots (a total that might really reflect less than half of the shots he redirected).

One of the stories that was abused before the game was the matchup of the vanRiemsdyk brothers. Trevor was moved up to skate with Seabrook and was on the ice for 19:59 in the game, the second-highest ice time total among Hawks defensemen behind only Seabrook; Duncan Keith skated 19:54 in the game. TvR had a solid game and looked good throughout; he was credited with three shots on net, two hits, hits takeaways and one blocked shot against his big brother’s team.

James vanRiemsdyk, the second overall pick behind Patrick Kane in 2007, scored the Leafs’ second goal in the game and skated over 22 minutes for Toronto.

Ben Smith led Hawks forward with 2:30 in short-handed ice time and led the team with four blocked shots in the game. Chicago’s penalty kill was successful all three times the Leafs had an advantage.

Corey Crawford returned to the net after two weeks away and allowed three goals against 27 shots in the loss. The game-winner was a save Crawford needs to make, but didn’t on Saturday night.