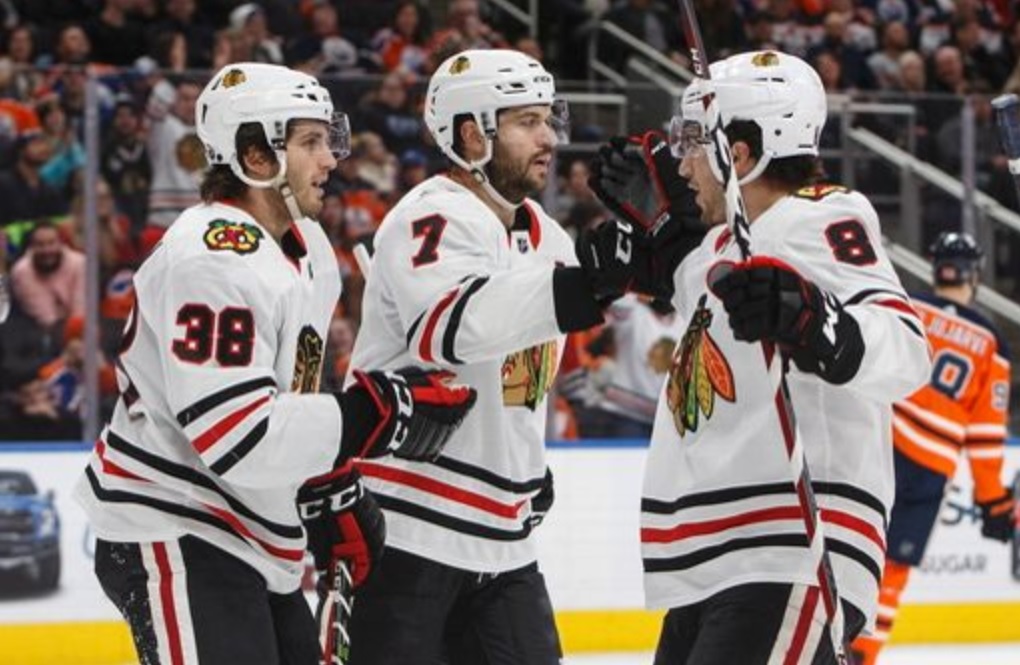 Welcome to the National Hockey League, Jeff Glass. The 32-year-old goaltender made his NHL debut in Edmonton against Connor McDavid and the Oilers the night after his struggling teammates got their butts kicked in Vancouver.

Cody Franson, activated off IR earlier in the day and joined the lineup that included Michal Kempny as well with Jan Rutta and Gustav Forsling getting a night off. With Artem Anisimov now on IR, Patrick Sharp was a healthy scratch up front.

This game saw some old teammates reunited. Edmonton’s Drake Caggiula played with Nick Schmaltz at North Dakota. Connor McDavid skated on a line with Alex DeBrincat with Erie in the OHL. And Glass was roommates with Brent Seabrook on Canada’s World Junior team in 2003.

Glass got a chance to knock any butterflies out in the first period as he faced 19 shots. There was only one power play in the first; Kempny sat down at 13 minutes. Jesse Puljujarvi scored on the advantage to give Edmonton a 1-0 lead in the first.

Chicago hung around, however, thanks in large part to Glass’ performance. And with 55 seconds left in the first period Ryan Hartman scored for the second straight night to tie the game.

Patrick Kane and Nick Schmaltz picked up the assists on the Hartman goal, his seventh of the season.

Chicago managed to put 11 shots on Cam Talbot in the first and went to the room for the first intermission with a tie score thanks to Glass.

In the second period, both sides killed a penalty in the opening 11 minutes of action. At 13:38 Richard Panik drew a penalty on Darnell Nurse and the Blackhawks proved that miracles never cease, scoring on their second power play of the night.

DeBrincat’s 13th of the season gave Chicago a 2-1 lead that the Blackhawks carried into the second intermission. Schmaltz and Duncan Keith were credited with the assists on the DeBrincat marker.

The Hawks out-shot the Oilers 14-12 in the second period and Glass was outstanding for 20 more minutes.

At 8:19 into the third Leon Draisaitl went to the box and a legitimate shockwave shook the region as the Blackhawks scored a second power play goal in one game (not month… game). This time it came from Jordan Oesterle, his first of the year.

Vinnie Hinostroza picked up the only assist on the Oesterle goal.

With under three minutes left in regulation, Edmonton called Talbot to the bench for an extra attacker. Ryan Nugent-Hopkins flipped a shot toward the net that appeared to tip off Seabrook’s glove and past Glass to cut the lead to 3-2.

Edmonton kept the pressure on and an unfortunate turnover from Schmaltz found Draisaitl who tied the game with 54 seconds left in regulation.

Regulation came to a close with the score tied at three. Glass made 42 saves in 60 minutes with two of the three goals coming inside the final 2:30. Chicago put 35 shots on Talbot in regulation.

Kane apparently didn’t want to leave the second point on the table and appreciated the hard work from Glass in regulation, so the Hawks superstar ended the game with a snipe 50 seconds into the overtime to win it for Chicago.

Schmaltz finished with three assists. Keith (two assists) and Kane (one goal, one assist) also had multi-point nights in the victory.

David Kampf led Chicago in faceoff attempts, winning 10 of 22. Jonathan Toews own 10 of 14 while putting five shots on net. Kane led the Hawks with six shots on net. Lance Bouma and Richard Panik led the Blackhawks with five hits each.

Oesterle skated 25:08 and led Chicago with seven blocked shots in addition to his first goal of the season. He was also credited with two hits.