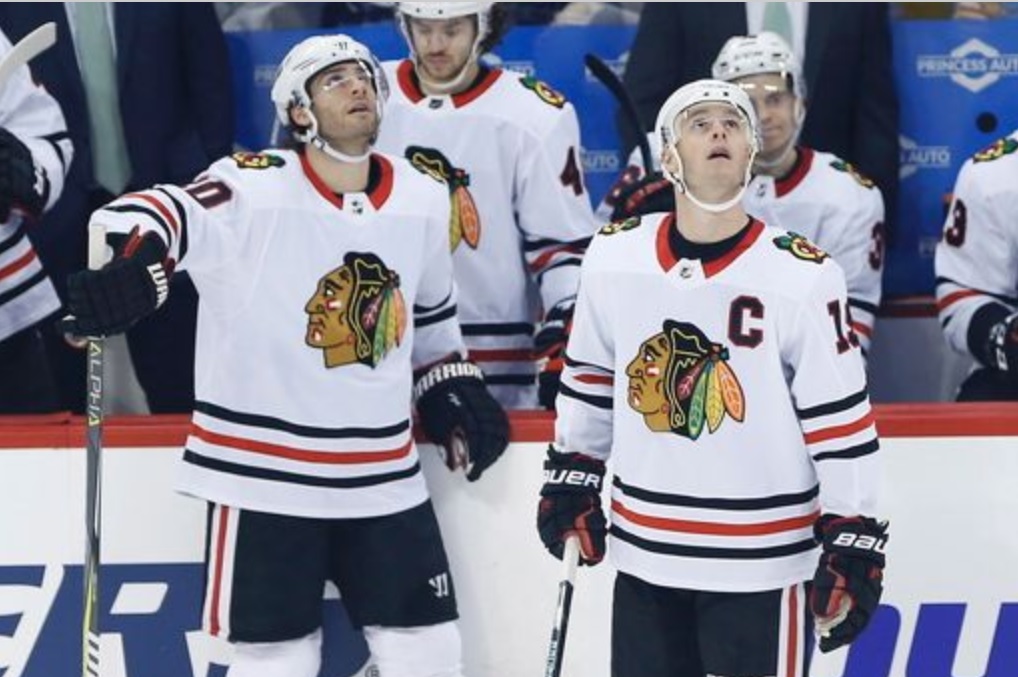 Stop me if you’ve heard this before.

The Blackhawks got their asses kicked.

It took all of 11 seconds for the Blackhawks to get on the board in Winnipeg. Brandon Saad opened the scoring with his 16th of the season.

But Winnipeg challenged the goal, saying the Hawks were offsides.

So the officials reviewed the play.

And reviewed it some more.

And… continued reviewing the play.

What felt like a half hour later, the goal stood, Chicago got a power play, and the game started over again.

Again, 11 seconds had come off the game clock.

By the time 9:36 had come off the clock, the Hawks were down 3-1 and Anton Forsberg’s night was over. He faced six shots, stopped only half, and got the hook before the game was ten minutes old.

JF Berube came in and faced seven more shots in the first period, stopping only five. And after 20 minutes the Blackhawks were buried 5-1.

Patrick Sharp scored the only goal of the second period, getting the Blackhawks back within three.

Which doesn’t even qualify as a moral victory.

Usually, teams that are trailing tend to put more shots on net than teams protecting a lead – especially a lead of three or four. The Blackhawks managed to get out-shot 26-16 in the final 40 minutes as the final score came out to 6-2 in favor of the Jets.

Chicago got outskated, outscored and outclassed on Thursday night.

Hopefully most fans in Chicago were out drinking to celebrate Loyola’s stunning win earlier in the afternoon.

To his credit, Berube ended up stopping 30 of 32 in his 50 minutes of relief work.

Sadly, moral victories stopped carrying any significance for this team a couple months ago.

35 thoughts on “Jets Cruise Past Blackhawks”