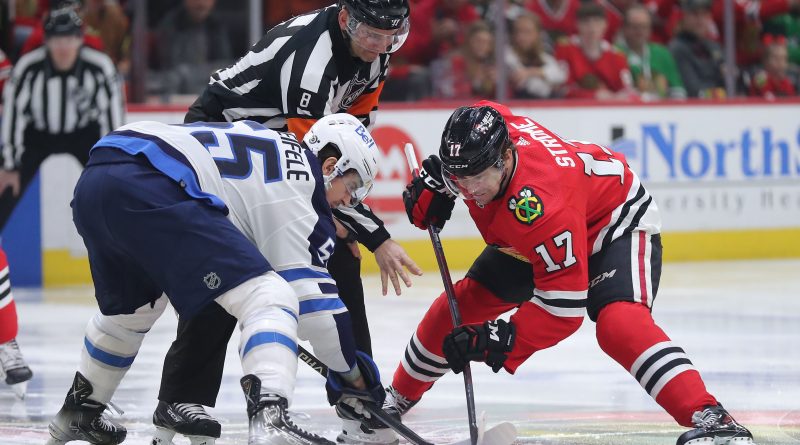 With the NHL Trade Deadline at 2 PM CT on Monday, the eyes of many were on the Blackhawks’ lineup for Sunday night’s game.

Marc-André Fleury was in the lineup. As were Calvin de Haan, Jake McCabe, Dominik Kubalik, Ryan Carpenter and every other Blackhawks skater who could potentially be traded before said deadline. After rolling with seven defensemen on Saturday in Minnesota, the Hawks were back to six defensemen on Sunday — including Alex Vlasic.

The opening 20 minutes were “the usual” from these Blackhawks. Winnipeg out-shot the Hawks 10-7 in the period and took a 1-0 lead to the room. Nikolaj Ehlers scored the game’s first goal at 9:14 into the first.

Chicago has struggled at times in second periods this season. Actually, they’ve either been really good or absolutely, brutally awful in the second period. Which did we get on Sunday?

Early, it looked like they were going to have a period. Newcomer Taylor Raddysh set up Jonathan Toews with a pretty pass to tie the game at one just 73 seconds into the second period.

The following shift, Chicago took a 2-1 lead. Dylan Strome was on the receiving end of a pretty pass from Patrick Kane and Chicago had two goals in 23 seconds.

Things were looking up… right?

Jansen Harkins scored 39 seconds after the Strome goal to tie the game.

Kyle Connor scored a power play goal with 2:24 left in the second to extend the lead to 4-2.

And Josh Morrissey made it 5-2 with 24 seconds remaining.

After scoring a couple times early in the period, the Blackhawks went back to fumbling the puck, skating away without it, attempting bad passes and failing to complete potentially good ones. It was a dumpster fire for 17 minutes, and Fleury was on the end of a bad period.

Chicago actually had a 17-13 shot advantage in the second period and still found a way to be outscored 4-2.

Winnipeg’s Jeff Malott went to the box 2:38 into the third period and Chicago got back on the board. Strome got the puck to Kane who fed a trailing Raddysh who ripped home his first goal as a Blackhawks.

The goal is only the sixth of Raddysh’s career, but his second at the United Center. So he’s got that going for him… which is nice.

Raddysh almost picked up a third point on what could have been an assist to Kubalik but he couldn’t handle the pass because he’s completely lost any/all ability to score at this point.

However, with seven minutes left in regulation Philipp Kurashev scored his first goal in what feels like three years and Chicago was suddenly back within one.

Fleury went to the bench with two minutes left in regulation. The Hawks got a few good looks at the net but couldn’t get hit home and eventually a bad pass went the other direction. Blake Wheeler scored with 69 seconds left in regulation to push the lead back to two.

That’s where the score ended. Not an ideal night for Fleury or any of the other players who might have played their last game as a member of the Blackhawks.

We’ll now sit back and watch to see who is dealt, where to and what it all means to the future of Chicago’s Original Six franchise.

Vlasic blocked two shots in 7:54 in his second NHL game.

36 thoughts on “Jets Too Much For Deadline-Watching Blackhawks”