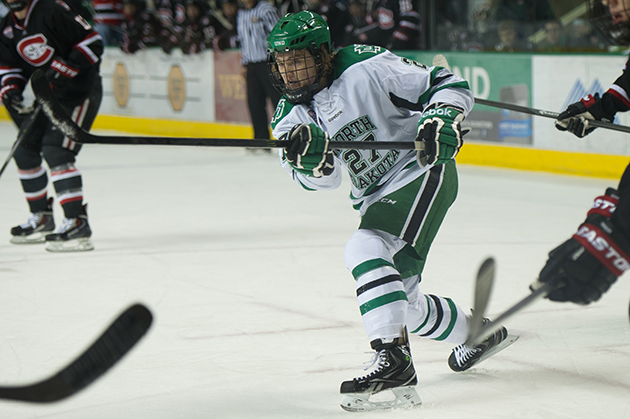 With their 5-2 victory against the University of Michigan on Saturday afternoon, North Dakota is headed to the Frozen Four in Tampa.

Blackhawks prospects Luke Johnson and Nick Schmaltz will head to Tampa, while Tyler Motte’s terrific season at Michigan comes to an end.

Johnson scored goals in both of North Dakota’s games this weekend. He was credited with the game-winner on Friday and scored North Dakota’s second goal on Saturday.

Schmaltz was held without a point by Michigan but had two assists in Friday night’s win against Northeastern.

Motte scored the game-winner for Michigan against Notre Dame on Friday and picked up two assists in the loss to North Dakota on Saturday.

UPDATE: in the late game, Blackhawks prospect Chris Calnan had an assist as Boston College advanced to the Frozen Four with a 3-2 win over Minnesota-Duluth.