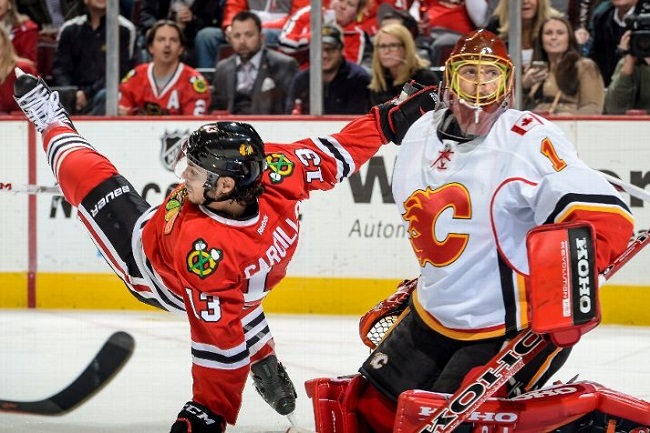 The Blackhawks dominated every statistic except goals scored on Wednesday night, and a goal with less than 25 seconds remaining in overtime gave Jonas Hiller a hard-earned win. In the second night of a back-to-back, it was an ugly box score for Calgary. Chicago out-shot the visitors 50-18, and Calgary blocked another 30 shot attempts in almost 65 minutes of hockey.

But Hiller made 49 saves to get his first victory of the season after struggling in his first two starts of the new year.

The Flames came into the game with a awful penalty kill, surviving only 62 percent of their short-handed opportunities before Wednesday.

But the Hawks converted only once in seven power plays.

A tipped shot got past Corey Crawford in the second period, but he performed well the rest of the night until Mikael Backlund beat him to end the game. He made a few big saves in the overtime before the game-winner, and finished the night with 16 saves against 18 shots in his first loss of the season.

After the game, coach Joel Quenneville noted the number of missed opportunities. The Hawks had a number of great looks at the net, but shots were either missed or sent wide of the cage.

Patrick Kane led all Hawks forwards with 23:38 on the ice, while Duncan Keith led all Chicago skaters with 27:50 in the game.

Jeremy Morin got nine shifts and only 5:48 in the game. Daniel Carcillo skated 14 shifts (9:05) and David Rundblad skated 11 shifts (9:14). Of the Hawks four centers, Brad Richards skated the fewest shifts (14); he saw 5:56 of power play ice time, but had another turnover at the blue line that led to a breakaway.

Keith, Richards and Rundblad led the Hawks with two blocked shots each. Sharp once again led the team with eight shots on net, and Shaw led the way with four hits. Bryan Bickell was credited with zero hits and one missed shot in 12:28 on Wednesday night, and found himself watching a significant part of the game with Richards and Morin.

The Blackhawks killed their only penalty of the night.