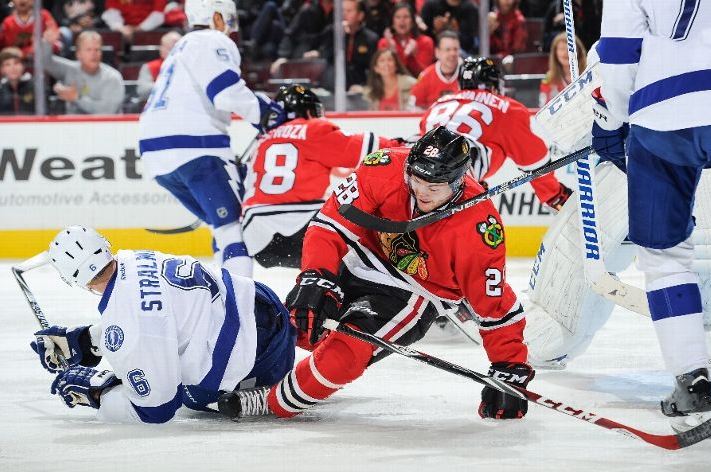 Appropriately, 60 minutes wasn’t enough for the rematch of last season’s Stanley Cup Final combatants. But it didn’t take long for Chicago’s captain to make his first goal of the season the game-winner.

Kristers Gudlevskis made his NHL debut and was fabulous for Tampa, stopping 31 of 32 shots. Unfortunately, one of the rare rebounds he left on the doorsteps ended up behind him as a determined Jonathan Toews made sure the game ended on the first shift of overtime.

Viktor Tikhonov started the game with Toews and Marian Hossa and the top line continued to look comfortable in spite of the lack of production. Tikhonov only skated 11:14 in the game but finished tied for the team lead with four hits and had one takeaway. Hossa was credited with two blocked shots, one hit and one takeaway but only one shot on net in 16:48.

Toews won eight of 14 faceoffs and was credited with two hits and four shots on net with the game-winner. He skated 22:41 in the game.

Ryan Garbutt was all over the ice; it felt like he skated a lot more than 9:51 in the game. He led Chicago with six shots on net and four hits in only 17 shifts, and was strong while killing penalties. Garbutt skated 1:32 short-handed and created a few scoring chances on PK duty as well.

Corey Crawford followed his 150th career regular season win with a 21-save shutout against one of the more powerful offensive teams in the league. He made a handful of big-time saves, and the defensemen in front of him once again stepped up in the absence of Duncan Keith.

Viktor Svedberg skated 19:25 and led the Hawks with five blocked shots. Trevor vanRiemdsdyk picked up a heavy workload once again, skating 22:53, and was up to the task. He blocked three shots and put two shots on net. Both TvR and Svedberg saw increased action on penalty kill duty and performed well. vanRiemsdyk led all Chicago defensemen skating 4:54 short-handed; only Marcus Kruger (5:09) had more ice time killing penalties on Saturday night.

Niklas Hjalmarsson skated 23:22 and blocked four shots, while Brent Seabrook was credited with blocked three shots and was credited with two hits in 23:19. Trevor Daley (14:23) skated the lowest ice time for the Hawks; David Rundblad twenty seconds more than Daley.

Even with his blue line beginning to show some chemistry, coach Joel Quenneville indicated at the morning skate that the team might call up a seventh defenseman from Rockford before next week’s road trip. Veteran Kyle Cumiskey is the most likely option if he’s physically ready to return to the NHL.

On Monday night, Chicago welcomes an Anaheim team that was shut out for the fourth time already this year on Saturday. Will Bruce Boudreau still be the head coach of the Ducks when they arrive?