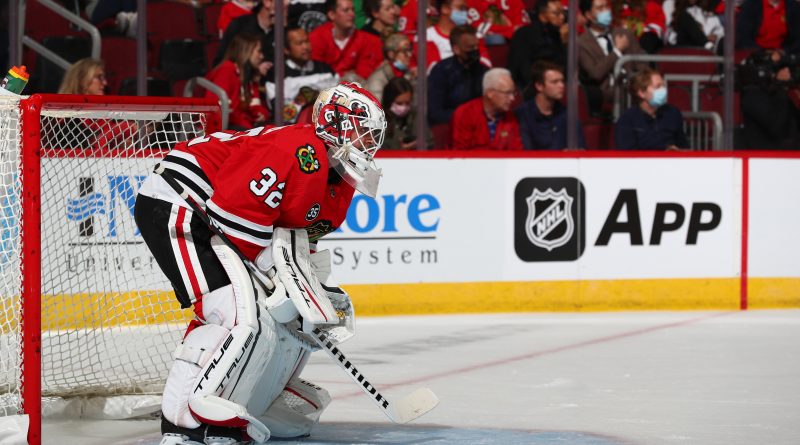 The Chicago Blackhawks played a hockey game at the United Center on Wednesday night. And there were fans in the seats. And the “other team” wasn’t their teammates. It was the Detroit Red Wings.

Well… the roster the Red Wings sent to Chicago to start the preseason.

Let’s keep this on point: it’s hard to make any grand statements about who’s awesome/incredible/a superstar and who sucks against what looked mostly like an AHL roster from Detroit. So instead of digging into who did what, instead we’ll focus on a few wider themes.

Jonathan Toews is back, and that’s a beautiful thing. And he looked good, too. After the first period he talked to Eddie Olczyk and made a joke about needing to watch film of the defensive zone, but for a guy who was off the grid for a full calendar year he looked strong. There will be some rough spots as he gets to know a roster that’s almost completely new from the last time he dressed for a game in the bubble, but damn if it didn’t make the heart jump a little to see 19 in red again.

Toews on a line with Philip Kurashev and Dominik Kubalik was intriguing. They combined for a goal to get Chicago on the board. Toews won seven of his first 10 faceoffs over the first two periods and skated 13:03 of the first 40 minutes. In total for the night, Toews won 15 of 21 faceoffs and skated 22:48. He then scored to open the shootout just like old times.

Lukas Reichel looks like he’s the goods. In his first NHL period, Reichel showed really good instincts and good speed. We’ll see how Jeremy Colliton slots him into situations as the preseason continues and which teammates he joins on the ice, but there was a lot to like from his debut. He scored a pretty goal in the shootout as well.

Adam Gaudette was impressive, too. He led the Blackhawks with six shots on net in the first two periods and showed pretty good jump.

Henrik Borgstrom had a strong debut. He was good at the dot early (which already gives him a step ahead of Dylan Strome in the battle for a center job). Borgstrom missed a backcheck early but also showed off some of the skill that made him dominant in college at the University of Denver. He finished 8-for-17 at the dot.

I’m still not sure what to make of Jujhar Khaira. If the Blackhawks want to be harder to play against, he’s willing to throw his weight around. And he scored a goal on Wednesday night on a nice redirect of a Connor Murphy shot. But if the Hawks want to be faster up and down the ice, and want the 12 best forwards in the organization to be dressed for the majority of the team’s games… I can’t see a scenario where he’s one of the top 12. Or even the top 15.

The blue line is far from settled. Wyatt Kalynuk was one of the really nice surprises last year, and on Wednesday he was handed the heaviest ice time among the Hawks’ defensemen. He got hammered behind the net early in the game and looked more tentative than he was at the end of last year. Caleb Jones looked pretty good. Riley Stillman was the same physical presence he was after the Blackhawks acquired him last year. There are just so many bodies for Colliton to choose from right now and nobody in this game really stood out.

Kevin Lankinen’s numbers were terrific. And last year he proved he can compete at the NHL level. He should be the Hawks’ backup netminder behind Marc-Andre Fleury this year. But we haven’t seen anything from the rest of the group, including Malcolm Subban. If I had a vote (shockingly, I don’t)… I would have Lankinen locked into the No. 2 spot on the depth chart now and would be working to find Subban a new home before the end of camp.

Alex Nylander continues to do very little for anyone. He reacts; he doesn’t drive the action. There are flashes of skill but they’re way too few and far between for him to be on the NHL roster this season. Yes, with all the caveats about who the Hawks were playing and when this is in the preseason… Reichel and Borgstrom and Gaudette are better options for the NHL roster right now.

Kirby Dach had a tough night. He fell a few times early and got his butt kicked at the dot all night. He had a few good moments and showed good speed and his passing was on point but he needs to get stronger in the faceoff circle – still. Dach won six of 21 faceoffs in the game.

Jeremy Colliton. Per usual. I get it… he wanted to see what the guys had in the first preseason game. But riding Toews for almost 23 minutes? For what? A meaningless win? Get the captain some run and some situational work and keep him in the middle of the pack. Toews handled it because he’s a pro’s pro, but I was surprised Colliton put him out there as much as he did.