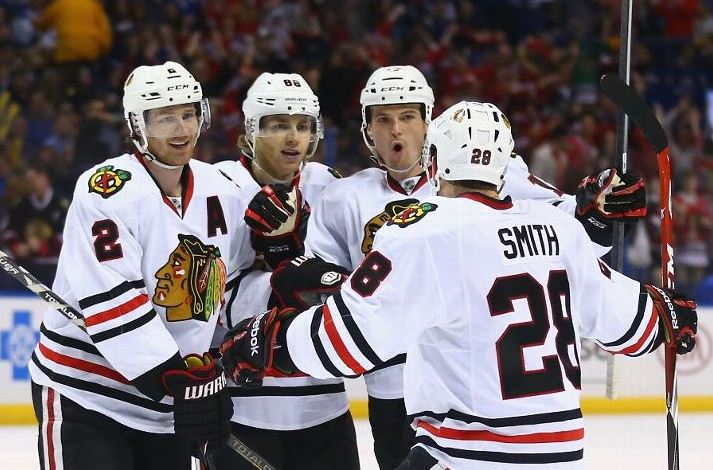 For the fourth time in five games, the first round series between the Blackhawks and Blues went to extra hockey.

In the previous three overtimes, the home team came away with the win.

On Friday night, Jonathan Toews broke that trend – and thousands of hearts in St. Louis.

At 7:36 into overtime, Toews came on the ice and received a gorgeous outlet pass from Duncan Keith. The breakaway ended as so many shootout attempts have for Chicago’s captain – in the back of the net – and the Hawks come home with a 3-2 series lead.

David Backes returned for the Blues and played 21:35 in the loss. Both coaches mixed up their lineups, and saw varying results from their lineups.

Joel Quenneville opened the game with Marian Hossa and Bryan Bickell skating with Toews, and that line provided the first goal of the game. Hossa finally found the back of the net with the puck… and ended up there himself after a late hit from Backes put him behind Ryan Miller. Unfortunately for Backes and Miller, the puck was there already, and the Hawks were up 1-0.

St. Louis tied the game at 11:04 into the second on a remarkable effort by TJ Oshie, who was falling to the ice but still managed to elevate the puck just enough to beat Corey Crawford.

A little more than six minutes later, Ben Smith gave the lead back to the Hawks with a nice move in traffic in front of the net. Like Hossa, it was Smith’s first of the postseason. Smith spent most of the game skating between Patrick Kane and Patrick Sharp, and that line was more dynamic than it had been with Michal Handzus at center. Smith won only two of 10 faceoffs, but played 19:28 in the game.

Only 1:42 into the third period, Alex Pietrangelo beat Crawford to tie the game, and regulation ended with the scoreboard knotted at two apiece.

Crawford made 27 stops in the game, including a number of athletic saves to keep the Hawks in the game. He did benefit from the Blues missing at least three wide open nets, an epidemic that has hurt St. Louis throughout the series.

Niklas Hjalmarsson once again played exceptionally well, leading the team with six blocked shots in over 26 minutes of ice time again. In the absence of Brent Seabrook, Hjalmarsson has elevated his game and been a rock on the blue line.

Sheldon Brookbank skated 18:35 with an assist, one blocked shot and two hits in the game. Stepping into the lineup while Seabrook has been suspended, Brookbank has done an effective job and has played a significant amount of ice time.

Both teams failed on two power plays in the game. Chicago had to kill two penalties inside the first ten minutes of the game.

Miller stopped 27 of 30 in the loss but left a lot of big rebounds for the Hawks to work with in front of the net. The Hawks were able to take advantage of those rebounds, and eventually won the game on the Toews breakaway.

Duncan Keith skated 29:04 and had the primary assist on the game-winning goal.

The Hawks – with Brent Seabrook back in the lineup – will look to close out the series on Sunday at the United Center.