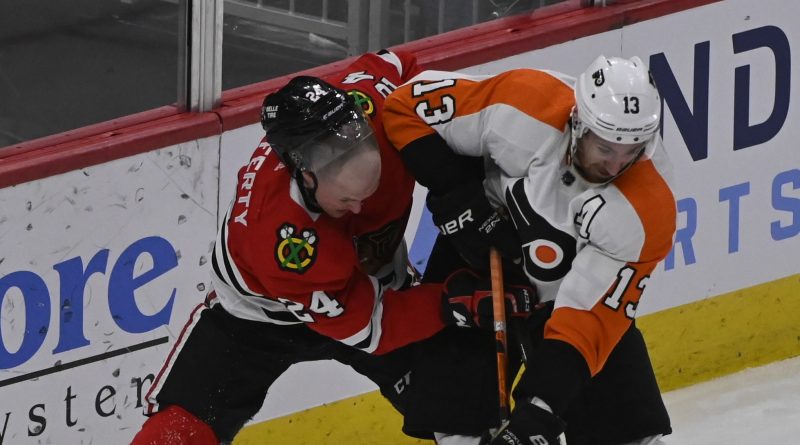 There was one game on the entire NHL calendar for Monday night. The Chicago Blackhawks came into the game with 63 points — only five teams in the league were worse. One of those teams, the Philadelphia Flyers (61 points) was on the other bench at the United Center. The two teams were almost identically bad entering the game; Chicago had scored 210 goals to Philly’s 208 and the Hawks had allowed 284 goals to the Flyers’ 287.

For those scoring at home, that means Monday night’s showcase game on ESPN+ and Hulu provided a matchup of teams with a combined minus-154 goal differential in their 80th games.

The big difference in this one was one specific guy missing in orange. While the Blackhawks kept most of their bigger names at the trade deadline, the Flyers traded Claude Giroux to the Florida Panthers.

Kevin Lankinen got the start between the pipes for the Blackhawks against Felix Sandstrom (not Sandstorm… that came later).

In the Blackhawks’ penultimate home game, it was Erik Gustafsson opening the scoring just 104 seconds into the contest — of course. Jonathan Toews got everyone’s attention and Gustafsson ripped home the snipe to give the Hawks a 1-0 lead.

Toews and Dominik Kubalik picked up the helpers.

Four minutes into the first, Toews was called for a penalty. As always, the captain wasn’t happy about the call but the replays we got from the broadcast didn’t clearly show where he supposedly slashed former Chicago draft pick Kevin Hayes.

Well, Toews sat in the box pissed off for two full minutes as Lankinen struggled to control a rebound but the skaters around him helped clear the puck. As the penalty ended, Sam Lafferty took the puck away and found Toews streaking for the net. He was able to slip the puck past Sandstrom to give the Hawks a two-goal lead.

Hayes would get one of the goals back for Philly a couple minutes later thanks to an ugly, blind pass by Gustafsson to the middle of the ice in the Hawks’ offensive zone.

Chicago would take a 2-1 lead to the room at the end of 20 minutes. The Flyers out-shot the Hawks 14-13 in the first. Toews won six of his nine faceoffs and Reese Johnson won all five of his draws in the first period.

Gustafsson went to the box after a terrible clearing attempt went over the boards six minutes into the second period. He was personally making this a very entertaining hockey game in the opening 30 minutes. The Hawks killed the penalty despite the Flyers controlling the puck for most of the two minutes.

Nothing happened for a while. Literally, nothing. The Hawks got a power play with 3:44 left in the second period and it was amazing that there were still three minutes left in the period… and that it was still the second period. It was just tremendously mediocre hockey from both teams.

Shockingly, the Blackhawks did nothing with the advantage.

The Flyers went 12 minutes without a shot on goal and Jake McCabe got hooked to put Chicago back on the power play inside the final minute of the period. The 58 remaining second in the period ticked off the clock without a power play goal and the Hawks headed to the room with the same 2-1 lead they had 20 hockey minutes prior. Chicago out-shot Philly 9-7 on the middle period.

Alec Regula (14:16) was Chicago’s ice time leader after two. He also led the way with two blocked shots and was credited with two hits. Alex Vlasic was on the ice for 11:54 and was tied for the team-lead with three shots on net. So the kids were doing alright on the back end. Toews won 11 of 15 faceoffs in the first two periods. And for Lankinen, 11 of his 21 shots faced came while the Flyers were on the power play.

The Hawks wasted the rest of the power play to start the third period but two minutes into the final frame Riley Stillman unloaded on Bobby Brink after Philly’s touted rookie released a shot. Brink was okay but it was a good, clean hit from Stillman.

Less than 30 seconds after the Stillman hit, Lafferty was able to draw a penalty on the Flyers. The Blackhawks were able to get Kane on the ice for a bit but couldn’t get a clean shot on net before the Flyers were able to stop play.

This time, the Blackhawks were firing at will. Patrick Kane, Alex DeBrincat and Seth Jones were ripping shots wide, off bodies and on net but couldn’t get one through. And another advantage disappeared without a goal.

The likelihood that this game would end with only three goals scored was highly unlikely given how terrible both sides are defensively, so the next goal was going to be big. And it came off the stick of DeBrincat, who received a ridiculous cross-ice pass from Kane and ripped home a one-timer for his 41st of the year — which ties his career high.

Jake McCabe picked up the second assist on the DeBrincat goal. Kane’s apple was his 66th of the season, which ties his career best total from the 2018-19 season.

the ONLY player in the NHL with more points than Patrick Kane since the start of the 2015-16 season is Connor McDavid.#Blackhawks

The Hawks got a fifth power play with Hayes in the box 11 minutes into the third but failed to do anything yet again. This most recent failure made the Hawks 3-for-35 with the alleged “advantage” over their last ten games, which is terrible for those scoring at home.

Philly emptied their net with 3:30 to go in regulation chasing two goals.

McCabe was sent off to give the Flyers a power play with 83 seconds left, keeping the door slightly ajar for Philadelphia.

Within the first ten seconds of the Flyers’ advantage they hit a post, and Stillman was there to keep the puck out of the net on behalf of Lankinen.

Toews tried to shoot at the empty net while short-handed but it went wide. Lafferty was in pursuit and got cross-checked into the boards in the corner by Joel Farabee. Lafferty didn’t like the play and whacked him back. Both guys were sent off for a couple minutes with 50 seconds showing on the clock. Philadelphia remained on a power play.

After head coach Derek King told his players to show up for the fans in their final two home games, they did just that. The final seconds came off the clock without any damage and Lankinen earned a victory.