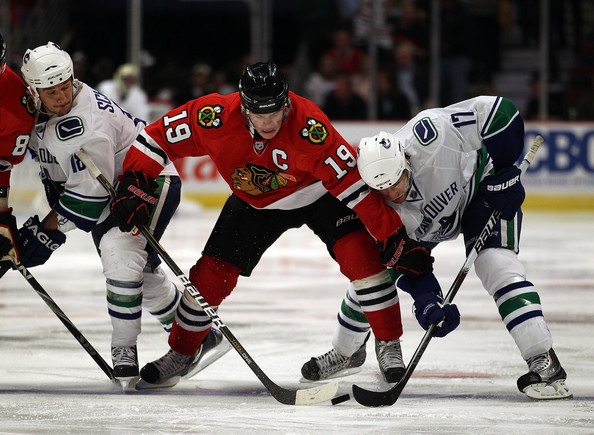 Vancouver’s Ryan Kesler is making a strong case for the Conn Smythe Trophy this spring.

And, the better Kesler plays, Jonathan Toews’ performance against him in the first round of the NHL playoffs becomes increasingly impressive.

On paper, the Predators’ team defense is better than the Blackhawks’ was this season.

Consider what Kesler did against Nashville in six games:

Now consider what Kesler did against the Blackhawks in the first round of the postseason, a seven-game series against a Chicago team that ranked 12th in team defense during the regular season:

There is an overwhelming difference between Kesler’s production from the first to second round of the playoffs, and it can be directly traced back to the work of Blackhawks captain Jonathan Toews against him.

When you place the production from Kesler in the two series into the context of the 2010-11 season he had, there should be no surprise that he was as productive against Nashville as he was; he put up 73 points in 80 games this year, and won 57.42 percent of his faceoffs during the regular season.

For his part in the series against Vancouver, Toews won 55.84 percent of his faceoffs (86/154) and posted four points with a minus-four rating in the series.

What made the match-up between Toews and Kesler special to watch is how similar the two players are on the ice; there is a reason they are two of the three finalists for the Selke Award this year, and both will likely be a finalist for the Hart Trophy before too much longer. Each plays an exceptional two-way game, and their first round head-to-head match-up was extraordinary.