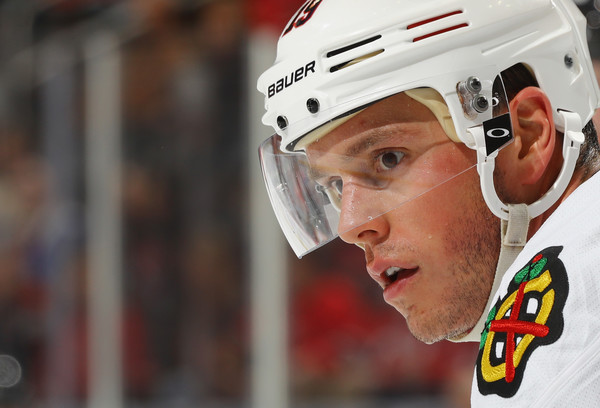 Another ugly start by the Blackhawks defensively was overcome by offense that wouldn’t quit.

And the demise of Jonathan Toews appears to have been greatly exaggerated.

The opening 20 minutes were ugly for both teams. A parade to both penalty boxes made the play choppy and both sides struggled to put together much sustained offense. Colton Parayko and Vladimir Tarasenko gave the Blues a 2-0 lead in the first as shaky defense early in the game was an issue again for the Hawks.

But 68 seconds after the Tarasenko goal, Toews got Chicago on the board.

The best line on the ice for Chicago in the first was Toews’ line, which was also a trend in the opener in Ottawa. Toews and Alex DeBrincat showed great chemistry and the captain was able to cut the lead in half before the opening period ended.

In the second, the Hawks battled back. Patrick Kane took over the game and tied the game at two 93 seconds into the middle period.

The Kane goal closed a dominant shift by his line that included a nice screen from Brandon Saad in front of the net.

Chicago had won 43 consecutive games when Kane and Toews score in the same game. Would that streak hold up?

Eight minutes later, Kane attacked the net and found a streaking Marcus Kruger for his first goal of the season.

Kruger’s goal gave the Blackhawks a 3-2 lead and sucked the life out of the arena in St. Louis. Chicago appeared to have some momentum and Cam Ward was settling down in net.

After a review of what appeared initially to be a tremendous save by Ward, Tarasenko was credited with a power play goal at 3:58 into the third to tie the game. Chris Butler gave the Blues a 4-3 lead 22 seconds later and the arena was awake.

Rookie Henri Jokiharju fired a shot at the net and Toews cleaned up the trash in front for his second of the game and third of the season.

The assist gave Jokiharju the first point of his NHL career.

Kruger went to the box at 12:47 and the Hawks spent the entire two minutes in their defensive zone. A stalwart effort kept the score tied and the two sides skated out the final five minutes.

In overtime, Toews exploded up the ice and received a perfect pass from Saad and completed the fifth hat trick of his career.

The third goal of the night gives Toews four on the young season, making this the fastest Chicago’s captain has reached four goals in a regular season in his career. The previous fastest for Toews was eight games – in his rookie year.

Quenneville smiled after the game when asked about the performance of Jokiharju, who continues to impress. The young defensemen picked up a second assist on Toews’ third goal. Quenneville compared the start of the season for Jokiharju to Barrett Jackman when Q was coaching in St. Louis. When the media joked that Hawks fans might not like the comparison, Quenneville noted that Jackman was the Rookie of the Year.

Jokiharju skated 19:30 with two hits, one takeaway and two shots on net with his first two career assists.

Toews won 13 of 26 faceoffs and added one hit in 21:12 on the ice. He was dominant for a second night in as many opportunities and appears to be set for a huge bounce-back season.

Nick Schmaltz won three of 12 faceoffs but was credited with two assists. DeBrincat also picked up two assists in the game, and Kane was the fourth Hawks skater with a multi-point effort adding an assist to his second period goal.

This is the first time the Blackhawks have opened a season with two overtime victories.