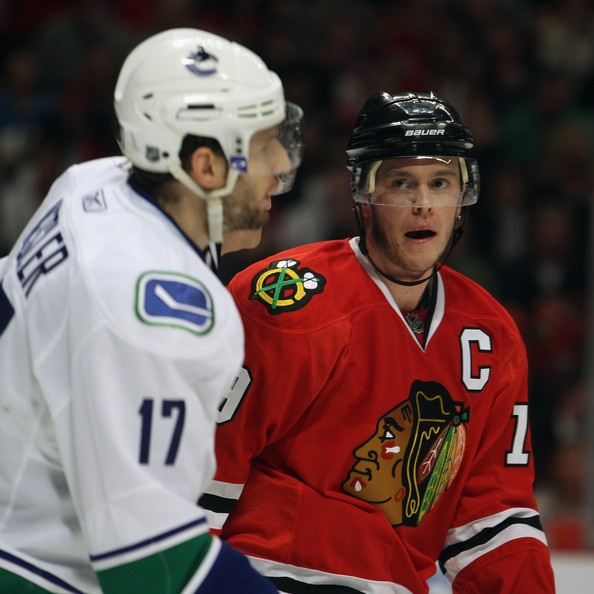 Blackhawks captain, and 2010 Conn Smythe Trophy winner, Jonathan Toews hasn’t had the most offensive series against the Vancouver Canucks to begin the 2011 postseason.

But does his lack of scoring mean he’s having a bad series? Some people have offered the opinion that he isn’t contributing enough.

Toews has drawn arguably the toughest defensive assignment throughout the series, regularly lining up across from Ryan Kesler. Kesler’s game is similar in many ways to Toews; he’s an outstanding two-way player who’s been great in faceoffs and added scoring to his repertoire this year.

In the regular season, Kesler ranked fourth in the NHL with 41 goals and finished with 73 points and a plus-24 rating. He also won 57.4 percent of his faceoffs and was credited with 124 hits, 80 blocked shots and 65 takeaways in a campaign that many analysts feel is worthy of the Selke.

So far in the 2011 postseason, however, Kesler has been a ghost. He is winning only 49 percent of his faceoffs and has only five assists in six games thus far. While he does have 20 hits, six blocked shots and three takeaways, Kesler’s lack of production has become a focus in Vancouver.

Toews has been better in almost every area. For his part in the series, Toews is winning 56.8 percent of his faceoffs and has been credited with nine hits, three blocked shots and an NHL-best 10 takeaways.

The matchup between Toews and Kesler has been a strong, physical series with two of the better young centers in the league doing their best work on the other. Since Dave Bolland’s return, the Blackhawks depth down the middle has been a huge advantage as the Hawks have come back to tie the series.

However, the fact remains: neither team can advance very far in this postseason without their best players performing. Vancouver and Chicago need Kesler and Toews to be a bigger part of their teams. However, while Kesler has a questionable postseason history, Toews’ entire resume indicates that he’ll soon add goals to his exceptional defensive play.

5 thoughts on “Jonathan Toews: How He’s Playing An Outstanding Series”