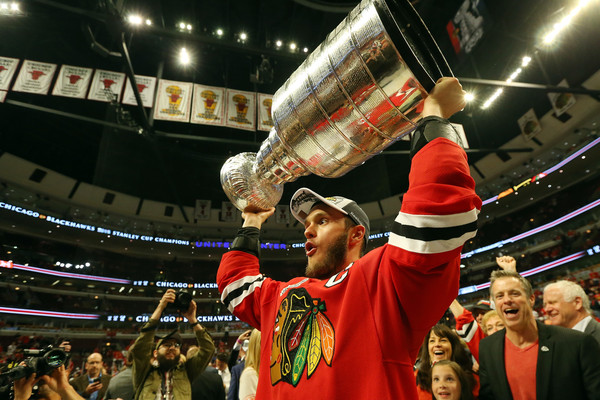 Before Game Six, we talked about the exclusive company Duncan Keith would join once he won the Conn Smythe. The Hawks defenseman has built a resume that assures him of entrance to the Hall of Fame.

With his third championship as captain of the Blackhawks, Jonathan Toews is also further cementing his place among the game’s all time greats.

As TSN pointed out last night, Toews is younger than a number of all-time greats when they won their third Cup.

Just over 27 yrs old, Jonathan Toews has 3 Cups at a younger age than several Hall of Fame leaders were for their 3rd pic.twitter.com/ItKOYC3JjZ

In adding his third ring, Toews becomes the youngest player to captain a team to three Stanley Cups since Wayne Gretzky with the Edmonton Oilers (1984, 85, 87, 88). Indeed, The Great One is the only captain to lead a team to three younger than Toews.

With 102 career postseason points, Toews is now 12th among active players (note: unlike official NHL statistics, we do not consider Chris Pronger active; he’s on the Hall of Fame ballot). The only player among the leaders ahead of Toews who’s younger than the Hawks’ captain: Patrick Kane (of course).

Looking back at Blackhawks history, Toews continues to re-write record books as well.

There have only been 17 individual postseasons in franchise history in which a player reached 20 points. Toews (twice) and Kane (three times) join Hall of Famers Stan Mikita and Denis Savard and should-be Hall of Famer Steve Larmer as the only players in the organization’s history to have multiple 20-point postseasons.

Three Stanley Cups, two Olympic gold medals, one Conn Smythe and one Selke Trophy and he’s still in the prime of his career.