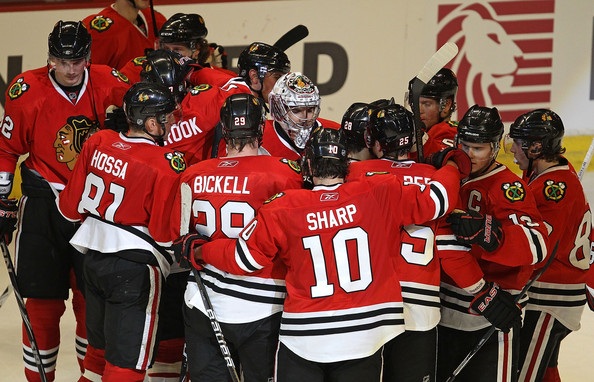 Patrick Sharp did his best Willis Reed impression, surprising most of the world by playing on Wednesday night.

Jonathan Toews did his best cholesterol impression, giving most of Chicago a heart attack.

The Blackhawks allowed a goal only 17 seconds into the game.

The Blackhawks allowed another goal only 66 seconds into the second period.

Quickly – and while allowing only five shots – the Blackhawks were down 2-0 in the biggest game of their season.

But a goal that was ruled good after a five minute review from Marian Hossa got the Hawks on the board. Tomas Kopecky tied the game in a mess in front of the net under six minutes later. And then the kid got involved.

Nick Leddy, who had the green light all night and played one of his best games as an NHL player. He put the puck on net time after time in the second, and finally got one past Ty Conklin. It was his fourth – and biggest – goal of the season, and made him the youngest defenseman in 10 years to have a multi-point night.

For his efforts, Leddy was awarded the game’s Number Two star.

Missing from the game’s stars was Sharp, who was shockingly effective after missing a couple weeks with a knee injury. Even though he appeared to take a knee-on-knee hit at one point, he skated the fourth-highest ice time among Blackhawks forwards.

Sharp led the team with seven shots on goal and four hits.

But it was Jonathan Toews, on a pretty assist from Duncan Keith, that reminded the hockey world that the Blackhawks still have life. He scored an epic game-winner that sent the masses home happy, and brings up a weekend series with Detroit with the money on the table.

Finally, a great night from Ben Smith, who was called up when Troy Brouwer went down. He spent a lot of time with Patrick Kane on Wednesday night, and didn’t look out of place.