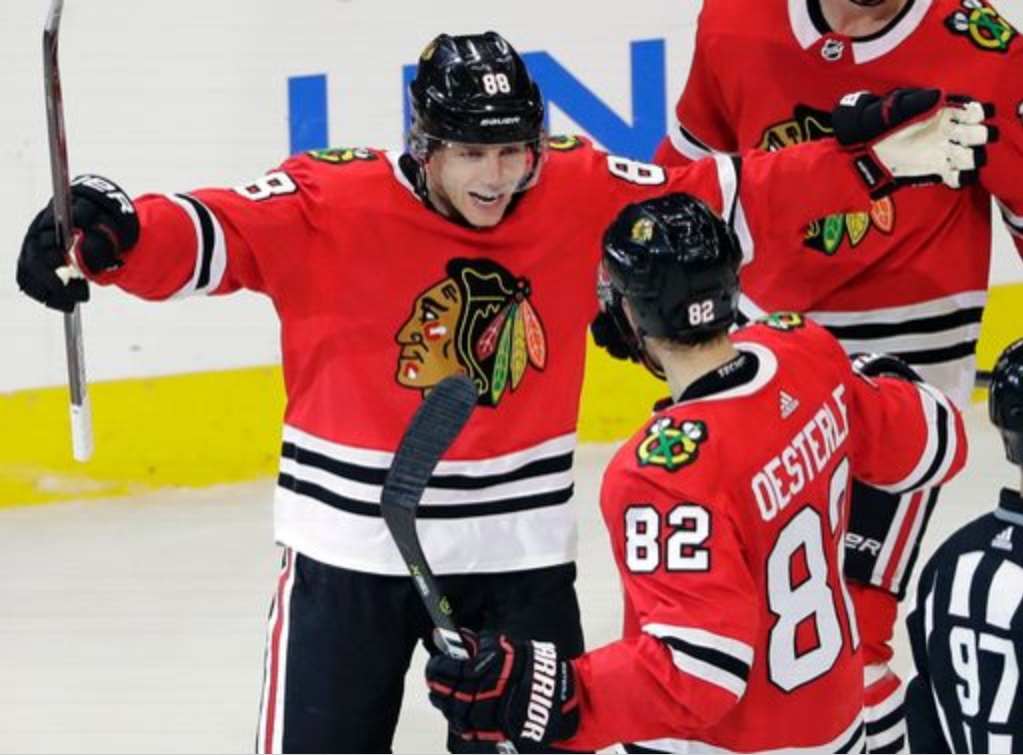 After a stunning, dominant performance in Winnipeg on Thursday night, the Blackhawks returned to the United Center to face another division rival. Minnesota came in tied with the Blackhawks with 37 points, but Chicago was riding a four-game winning streak (after a five-game losing streak).

Chicago got an early power play with Mikko Koivu in the box but… wait for it… wasted the advantage.

At the mid point of the opening period, Patrick Kane didn’t waste this terrific pass from Nick Schmaltz.

Minnesota out-shot Chicago 13-9 in the opening 20 minutes but the Kane marker was the only goal. Corey Crawford had a strong period because that’s what he does, and the Hawks took a lead to the second period.

The Blackhawks got three (3) power plays in the second period and out-shot Minnesota 22-6 in the middle stanza.

But Chicago was only able to extend their lead to two, another goal from Kane. This one coming off a beautiful outlet pass from Jordan Oesterle.

With his 299th career regular season goal in the Indian head, Kane moved past Dennis Hull into sole possession of fifth place in franchise history. Next on his hit list is his first NHL coach – Denis Savard – at 377.

Chicago wasted plenty of chances in the second period, however; Alex Stalock was good in net for the Wild.

The Blackhawks opened the third with a nice insurance goal from Ryan Hartman.

Crawford wouldn’t get a shutout on Sunday night, however. Matt Dumba scored at 5:56 into the third to cut the lead to 3-1.

The two sides skated without a goal for almost ten minutes. With Vinnie Hinostroza in the box and his team trailing by two, Bruce Boudreau pulled Stalock with more than four minutes left in regulation. Tommy Wingels took advantage of the open cage and flipped a loose puck in for his sixth of the season.

That would hold up as the final score of the game, and the Blackhawks came away with their fifth straight win.

Crawford made 27 saves to earn another good victory. He has allowed seven goals over the five games during the current win streak.

Lance Bouma led Chicago with five hits and also blocked a shot in 12:01. Wingels added three hits and one blocked shot to his goal in 11:03.

Connor Murphy was credited with a team-high three blocked shots and finished tied for the team lead with five shots on net; Kane and Brent Seabrook also put five pucks on the net.

Jonathan Toews won 13 of 23 faceoffs and was credited with two hits, one takeaway and four shots on net.

For his part, Stalock made 42 saves and probably deserved a better outcome, but the Hawks were simply too good on Sunday night.