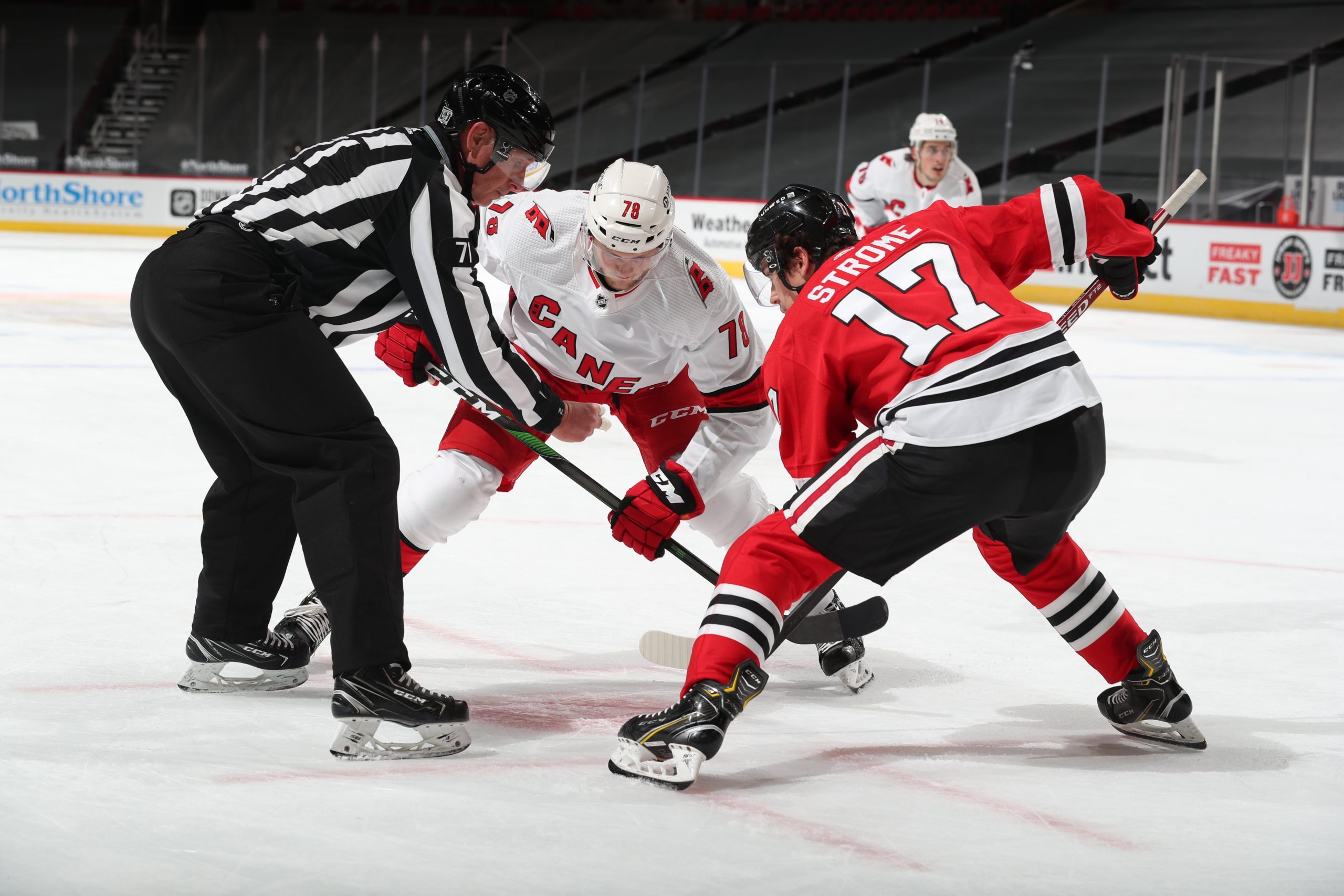 So what exactly are we supposed to make of this group of Chicago Blackhawks? For as much as everyone was willing to take their shots at the roster when the season began, this team has become entertaining and competitive.

And frustrating at the same time.

Sebastian Aho gave Carolina a lead 75 seconds into the game. The powerful Carolina offense looked like it might be ready to take the game over early.

A parade to the penalty box for Carolina opened the door and the Blackhawks blasted through it.

Mattias Janmark tied the game with a power play goal at 3:17 into the first.

Phillip Kurashev and Dominik Kubalik picked up the assists.

Kubalik gave the Hawks a 2-1 lead with a power play of his own 11 minutes later.

Janmark and Nicolas Beaudin were credited with the helpers on this goal.

Chicago wasn’t done. With seven seconds left in the period, Andrew Shaw scored a power play goal to make the score 3-1 in favor of the home squad.

Patrick Kane and Kubalik picked up the assists.

When the dust settled, Kubalik and Janmark had two points each. The Blackhawks out-shot the Canes 13-5 in the period and had three power play goals to show for the opening 20 minutes of action.

Nino Niederreiter scored 42 seconds into the second to cut the lead to one.

Carolina scoring twice in 50 seconds to start the period was bad, and the Canes didn’t let up on the gas. But Lankinen settled down and made some big saves to keep the game tied at three.

The visitors out-shot the Hawks 17-9 in the second period and the game was tied heading to the third.

So… which Blackhawks team would show up for the final 20 minutes?

After taking a penalty on the opening shift of the period, Kane emerged from the box and gave Chicago the lead with a fortunate goal.

Carl Soderberg picked up the assist on Kane’s goal, his first point with the Blackhawks.

Unfortunately, the lead didn’t last three minutes. Brock McGinn was left all alone and unloaded a shot that beat Lankinen for a fourth goal.

The Blackhawks weren’t helping Lankinen out much. They were getting their collective asses kicked at the dot all night and Carolina had plenty of space to work with the entire night.

But the Hawks didn’t go away.

At 12:22 into the third, Alex DeBrincat scored his first even strength goal of the season to give Chicago the lead again.

Pius Suter and Kane were credited with the assists.

Kane had three points, but took a second penalty in a bad spot late in the third period. Branden Hagel, who had a really good short-handed breakaway opportunity during Kane’s penalty early in the period had another good chance on this penalty kill. He’s been impressive.

Hagel was without his stick for an extended period on the late penalty kill but still managed to block a big shot. The Hawks killed off the penalty to maintain a one-goal lead.

Carolina emptied the net with 80 seconds left in regulation. In a scary moment with 54 seconds left, Calvin de Haan made a strong, clean hit on Martin Necas in the corner of the Blackhawks’ zone. Necas was upended on the play and his head bounced on the ice as he landed. He needed help getting off the ice.

As the Canes scrambled to come up with a tying goal, a loose puck found Kane who hit DeBrincat with a clean breakaway pass. DeBrincat scored into the empty net for his second of the night; the primary assist gave Kane four points on the night.

The final shots on net favored the Blackhawks 35-34. Carolina won 62 percent of the faceoffs, however, an issue that continues to be a concern.

DeBrincat was terrific. In 21:27 he had a team-leading six shots on net and was also credited with two blocked shots, four hits and two takeaways.

Ian Mitchell skated 13:57 with two blocked shots and one hit.

Dylan Strome won only seven of 21 faceoffs but contributed in other areas. He put four shots on net and blocked three shots.

Chicago’s penalty kill was perfect against four Carolina power plays and they scored on three of their five advantages in the game.

The Blackhawks now have points in eight of their last nine games and head to Dallas an interesting team.