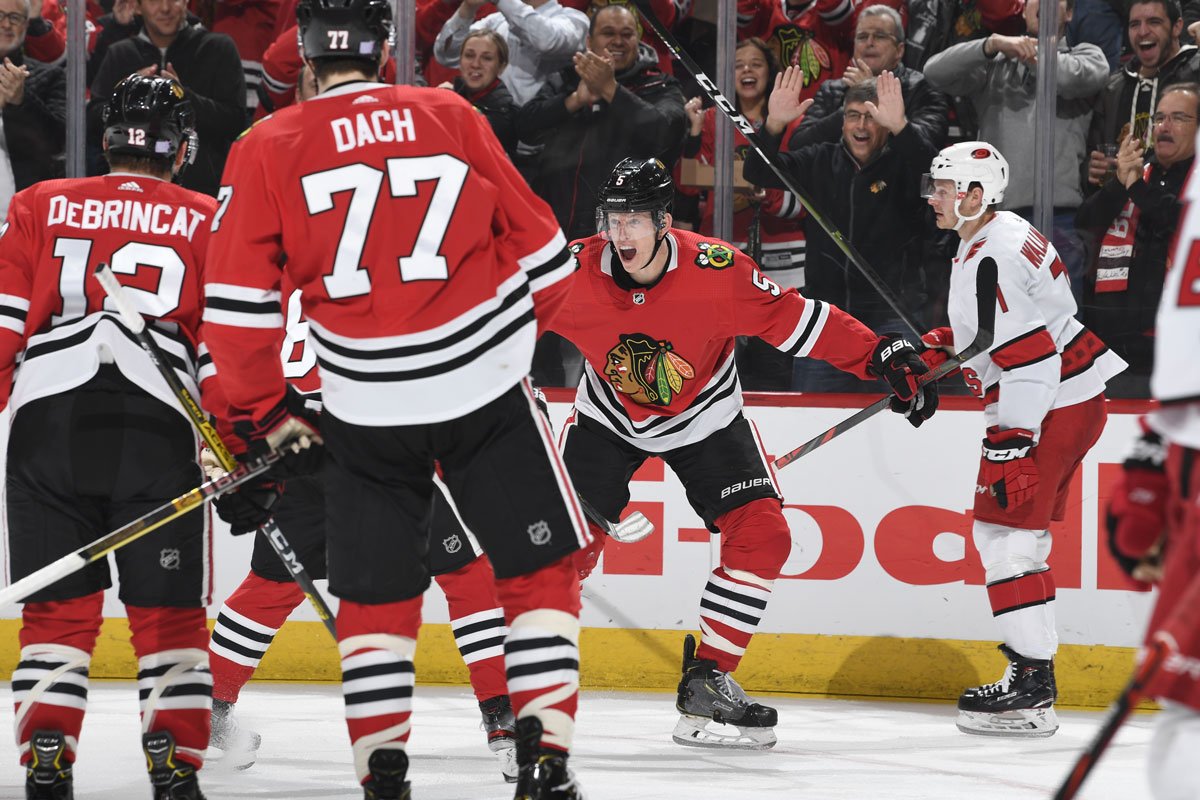 The Carolina Hurricanes have been in Chicago for three days, waiting patiently to face the Blackhawks.

The Blackhawks, on the other hand, played in Nashville on Saturday and hosted Buffalo on Sunday.

Carolina also came in winners of their last three and outscored their opponents 17-9 in those games. Averaging 3.45 goals per game coming into Monday, the Canes offense ranked eighth in the league.

The Blackhawks had been terrific in first periods lately, but that was far from the case on Tuesday evening. Chicago put four shots on net in the opening 20 minutes. A Martin Necas goal at 14:24 into the first was the difference; Carolina was credited with 13 shots on Robin Lehner.

Dougie Hamilton went to the box at 8:14 but Sebastian Aho had more scoring opportunities on the power play than the Blackhawks – who had the advantage.

Nino Niederreiter skated past Erik Gustafsson 11 minutes after the Svechnikov and scored to make the score 3-0 in favor of the visitors. Chicago appeared to be out of gas.

Carolina out-shot the Hawks 14-8 in the second period, making the shot totals 27-12 after 40 minutes of hockey.

Jeremy Colliton threw the lines in the blender to open the third period. Chicago opened the third with Brandon Saad, Jonathan Toews and Andrew Shaw followed by Alex DeBrincat, Kirby Dach and Patrick Kane. In the middle of the period we saw a line of Alex Nylander, Dylan Strome and Ryan Carpenter together. Because why the hell not?

Lehner kept making big saves all night, as he has done so often this season, keeping the Hawks in the game.

At 12:05 into the third period Kane found Erik Gustafsson flying to the net and Chicago was finally on the board.

Same script, new defenseman. Kane set up another defenseman, Connor Murphy, 70 seconds after the Gustafsson goal and suddenly the Blackhawks were within one.

The United Center was awake, the Hawks were flying and what had been a lifeless offensive effort was suddenly electric thanks to slick passing by the birthday boy. Kane, who turns 31 on Tuesday, extended his point streak to 10 games with the assist on Gustafsson’s goal.

Patrick Kane is has hit double digit games in a point streak for the 6th time in his career:

Dach extended his point streak with the second assist on the Murphy goal.

Making matters worse for Carolina, the Blackhawks got their second power play of the night 34 seconds after the Murphy goal.

Chicago didn’t score on the power play and Lehner went to the bench with an offensive zone faceoff coming at 2:08 left in regulation.

With 20 seconds left in regulation Gustafsson turned the puck over and Aho put it into the empty net. After the goal Kane went after Aho who boarded him a few moments earlier without a penalty called. Unfortunately Kane would get the gate to end his night at 599 career assists.

Kane’s hot streak continues to be impressive. He’s produced a point in every game in November and has six multi-point efforts in the month.

Lehner stopped 29 of 32 shots. The Blackhawks finished the game out-shooting the Canes 20-6 in the third period to make the game shot totals 33-32 in favor of Carolina.

Toews led Chicago with five shots on net and won 12 of 21 faceoffs.

Murphy and Brent Seabrook led Chicago with four blocked shots each. They had three hits each; Olli Maatta led the Hawks with four hits. Duncan Keith (23:52) was the only Hawks defenseman over 20 minutes of ice time.

68 thoughts on “Kane-Fueled Comeback Comes Up Short Against Canes”