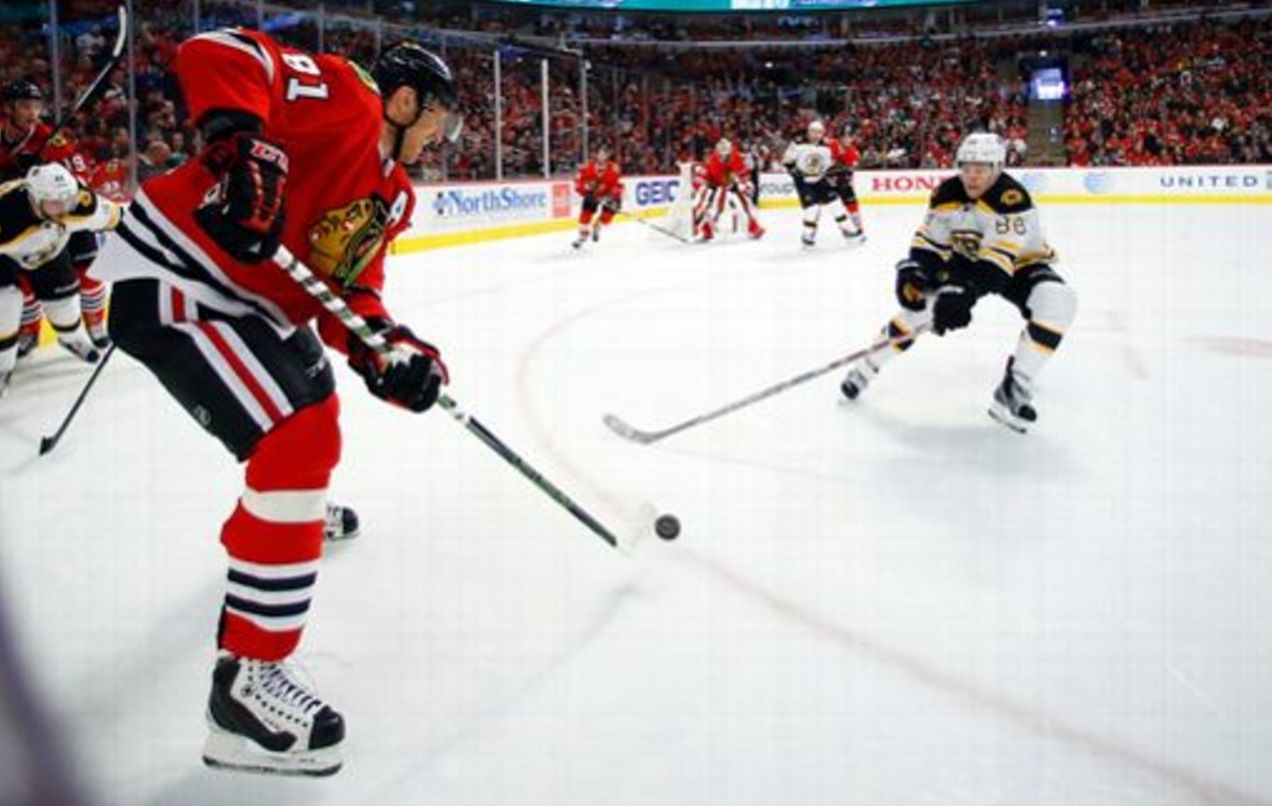 It was an… interesting day at the United Center on Sunday.

The Hawks were hoping to get off to a better start, and accomplished that with a big first period. Chicago put 19 shots on net and scored twice in the opening period as Artem Anisimov scored his 20th of the season on a power play and Patrick Kane scored on a breakaway. That would only be the beginning of a huge afternoon that that line and the Hawks offense.

In the second period, the Blackhawks looked like a dominant team looking to defend their title for 19 minutes. Kane scored his 42nd of the season only 54 seconds into the period, and just 66 seconds later Marian Hossa had a great chance to score his 500th career goal with a 2-on-1 but instead deferred to Jonathan Toews. The Hawks’ captain scored his 26th of the season to extend the lead to four and chase Boston starter Tuukka Rask from the game.

Rask allowed four goals against 22 shots in only 22 minutes of action. He was replaced by Jonas Gustavsson.

The Hawks didn’t treat Gustavsson much better. Kane fed Artemi Panarin for his 28th of the season less than four minutes after the change. That assist gave Kane 99 points on the season.

With that goal, his third of the game and 43rd of the year, Kane reached 100 points on the year. His performance in the opening 40 minutes was enough for the NBC crew to say the case for this year’s Hart Trophy was closed – Kane is the league’s most valuable player.

When the hats were cleared off the ice and the celebration of Kane’s milestone concluded, the Hawks put their offense away for the afternoon, unfortunately. And a game that was 6-0 became more stressful than it should have been.

In the final 16 seconds of the second period, Boston scored twice. David Pastrnak and Patrice Bergeron scored 11 seconds apart to not only end Scott Darling’s shutout bid, but also cut the lead to four before the second intermission.

Exhale. The Hawks still have a four-goal lead.

When the third began, Boston’s top line – the most productive in the NHL – continued to make life hell for the Hawks. Bergeron scored again, his 32nd of the year, at 2:39 and then Brad Marchand added his 36th of the season at 9:51. Suddenly a blowout was in question.

The Bruins matched the dominance the Blackhawks displayed in the first period in the third, out-shooting Chicago 17-3 in the final frame. It was painfully obvious that the Hawks missed suspended Duncan Keith down the stretch; Erik Gustafsson skated just 11:39 and Viktor Svedberg was credited with four giveaways.

But the Hawks were able to hang on and pick up two critical points in the standings. Chicago will now finish no lower than third in the Central Division, meaning a date with either St. Louis or Dallas is coming up in the first round of the playoffs.

Allowing four goals wasn’t the only concern at the end of the game. Already without Andrew Shaw, who has already been ruled out for Tuesday as well because of an upper-body injury suffered in Winnipeg, the Hawks are hopeful Hossa doesn’t miss much time. He appeared to suffer a knee injury during the third period and did not return. After the game, the team indicated they’re hopeful he can still go on Tuesday.

As one would expect in a six-goal win, there were lots of highlights in the box score. Panarin had his second consecutive four-point game, matching Kane’s 72 point rookie mark with the club. NBC also crowned Panarin during the second intermission, saying the Calder Trophy race was over. Panarin became the first rookie in club history to record back-to-back four-point games.

Chicago’s rookie sniper is now tied for 11th in the NHL in points, only one behind Dallas’ Tyler Seguin. Unfortunately for both Dallas fans and those keeping track of Panarin’s bonus clauses, Seguin’s regular season is over. Panarin sits four points behind San Jose’s Joe Pavelski, who is sixth in the league with 76 points.

Anisimov had a three-point afternoon (one goal, two assists) and Brent Seabrook picked up two assists in the game as well. Seabrook led the Hawks with three blocked shots, while Dale Weise made a rare appearance and led Chicago with three hits.

Darling finished the afternoon with a .913 save percentage; he stopped 42 of 46 in the win.