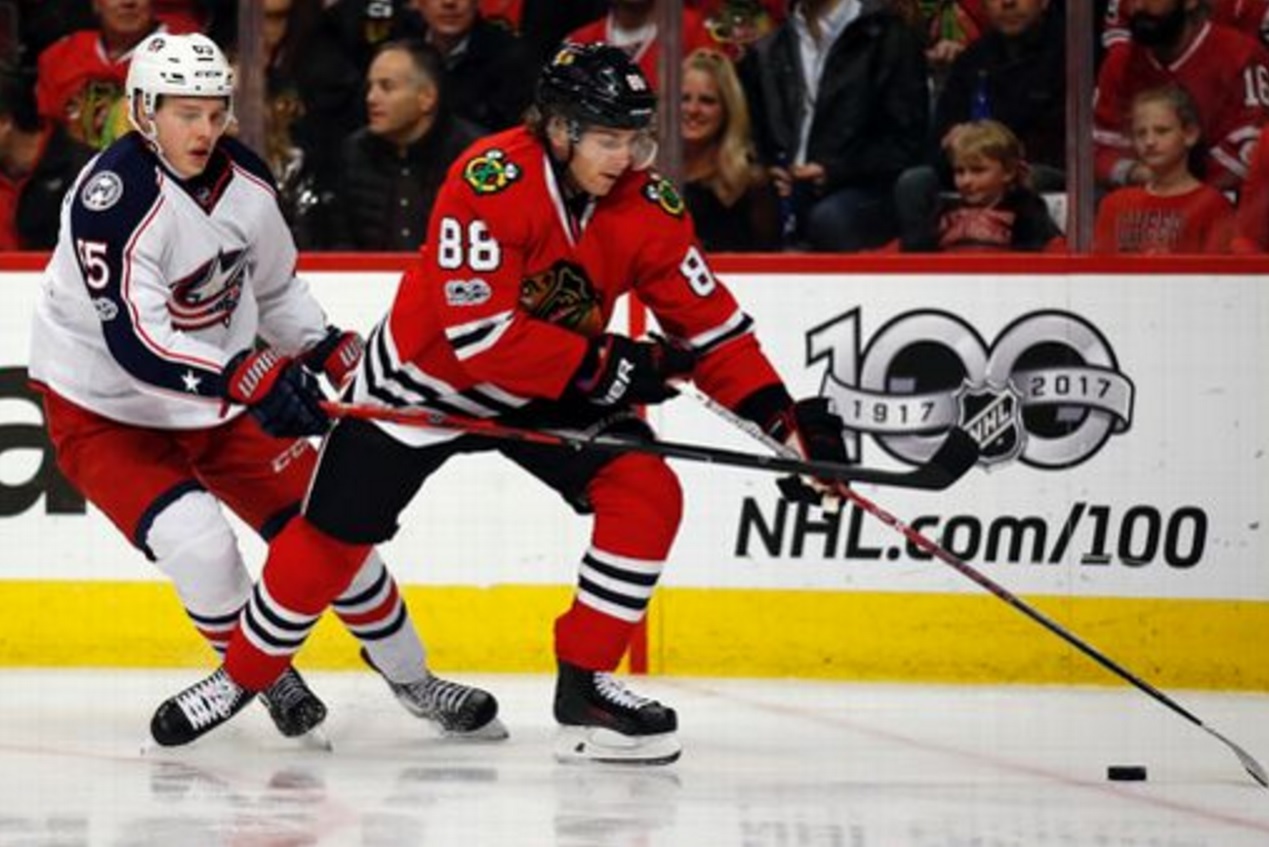 After a dominant win in Pittsburgh, the Blackhawks came home to host a tired Columbus team that was forced to fly into Chicago on Friday morning because issues kept their plane on the ground in Raleigh on Thursday night. That didn’t keep the game from getting physical early and often.

Brandon Dubinsky went to the box only 28 seconds in and the Hawks jumped all over the Jackets.

Artemi Panarin’s 27th of the season off a gorgeous pass from Patrick Kane took only four seconds off the power play and gave Chicago a 1-0 lead. On the play, Jonathan Toews was credited with the 350th assist of his career.

The parade to the penalty box was only starting – for both teams. Chicago and Columbus both killed a penalty in the middle of the period, and then Boone Jenner and Ryan Hartman got mixed up and both headed off for two minutes. Nick Foligno tied the game 54 seconds into the 4-on-4, but the game didn’t stay tied long.

Marian Hossa’s pretty goal came only 22 seconds after the Foligno marker and gave the lead back to Chicago. The assist was Kane’s 52nd of the year.

Hartman kept chirping, and got Foligno to take a penalty after the horn ending the first period. Chicago didn’t convert on the power play, and the hitting continued into the middle period. Jortin Tootoo hit Foligno with a high stick at 13:54 but Chicago killed the penalty. The Hawks killed another penalty, this one overlapping into the third, with Johnny Oduya in the box.

Through 40 minutes, Columbus held a 19-17 shot advantage. Both Corey Crawford and Sergei Bobrovsky were on top of their games, and Columbus kept bringing the hits.

By the mid-point of an up-and-down third period, Columbus had a 28-8 hit advantage but was still trailing. Niklas Hjalmarsson went to the box at 9:15 because of a dreaded delay of game penalty, giving the Jackets a desperately needed advantage. For the fourth time in the game, however, the Blackhawks killed a power play.

And, again, the best penalty killer wearing red was Crawford.

With an empty net, the Hawks were able to clear the zone and Kane found Panarin again to push the lead to 3-1 with just 43 seconds remaining in regulation.

Behind a magnificent third period from Crawford, the Blackhawks emerged with a strong home win against another top team in the Eastern Conference.

Crawford finished with 32 saves, 14 of which came in the third period. Kane assisted on all three goals and was credited with four shots on net. Panarin led Chicago with six shots in the game.

It wasn’t a great night at the dot for Chicago again. Tanner Kero won two of 11, Marcus Kruger won five of 13 and Toews won six of 14.

Brent Seabrook had a team-leading four blocked shots and Tootoo led the way with three hits.

17 thoughts on “Kane and Panarin Lead Blackhawks Past Jackets”