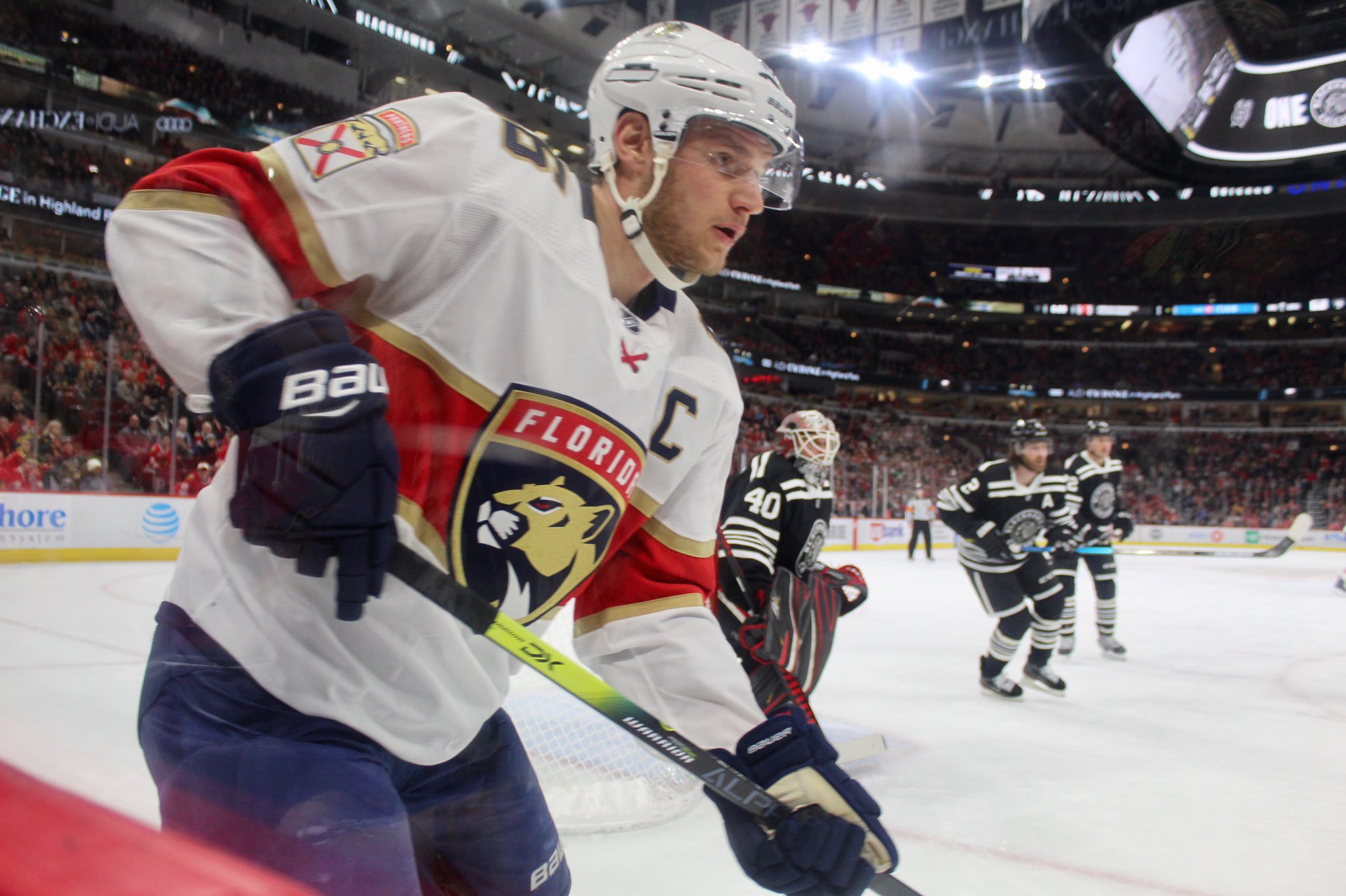 After Jonathan Toews and Duncan Keith had a bit of a dust-up at the pre-game skate, the Blackhawks threw a pretty impressive party for Kirby Dach’s 19th birthday on Tuesday.

Before the game, the team honored Patrick Kane reaching 1,000 career points. Then, during the first TV timeout, the team welcomed back Joel Quenneville. The poor teenager couldn’t even get a cake and candles meme on the video board.

Seriously, though, what was it like for Quenneville to be back behind a bench – albeit the visitor’s – at the United Center for the first time in 14 months?

Once the ceremonies were done and the tears had been wiped after a wonderful moment for the fans and Q, two teams riding five-game winning steaks had to focus on the task of winning a game.

Perhaps both teams allowed the emotions of the two celebrations to get to them because the opening 20 minutes were pretty plain. Florida held a 7-6 shot advantage after the first period and neither team scored.

The Panthers didn’t waste much time in the second period, however. Evgenii Dadonov got the visitors on the board first with his 22nd of the season at 4:43. Frank Vatrano scored his 12th of the season 91 seconds later to extend Florida’s lead to two.

Chicago got a power play with Aaron Ekblad headed to the box at 7:54 but failed to convert. Ekblad came out of the box and the puck immediately found him at center ice. He made a terrific pass to Vatrano who beat Robin Lehner five-hole for his second of the night. Suddenly the score was 3-0 in favor of the Panthers after Florida scored three times in less than six minutes.

The Hawks pushed back as they have done all season. After a couple shifts trying to get a shot through the Hawks were able to finish a good rush. At 13:33, Alex DeBrincat set up the birthday boy and Dach ended a 13-game goal drought with a dirty backhand shot.

Slater Koekkoek joined DeBrincat in being credited with an assist on Dach’s seventh of the season. Koekkoek has an assist in four of his last five games and entered Tuesday’s game plus-seven in January.

The Hawks weren’t able to beat Sergei Bobrovsky again before DeBrincat went to the box for tripping with 97 seconds left in the period.

On the pentlay kill Ryan Carpenter neatly picked off a pass from Vatrano and tried to hit the puck to Brandon Saad headed up the ice but hit Saad in the skates with the pass. Florida turned around and burned the Hawks for the failure to get it out. Vatrano scored his third goal of the second period on the power play to give Florida a 4-1 lead with 37 seconds left in the period.

After a subdued first period the offense exploded in the second. The Hawks out-shot the Panthers 14-13 in the second and the two teams were credited with 20 shots each after 40 minutes. Unfortunately the Panthers had four on the board to the Hawks’ one as the teams headed to the third period.

Through two periods Toews had skated 13:52 and won 12 of 18 faceoffs. Kane was already up to 15:26 and was tied with Saad for the team lead with four shots on net. But neither of them had a point. Toews came into the game with 799 regular season points in his career.

As the second period ended those watching the scoreboard noted that the Jets and Golden Knights, two teams near the Blackhawks in the playoff chase in the Western Conference, had already lost their games. There was ground to be gained, but Chicago needed to put together a serious comeback in the third period to make that happen.

Two minutes into the third period Keith Yandle tripped Drake Cagguila as he crashed the net. The official’s arm went up and Chicago got their second power play of the night.

On the power play, Erik Gustafsson unloaded from the point and Cagguila, who was in front of the net, was able to get a stick on the shot to tip it past Bobrovsky.

Cagguila’s sixth of the year brought the Hawks within two goals of the Panthers four minutes into the third. Gustafsson and Keith were credited with the assists on the goal, giving Keith 597 points in his Hall of Fame career and moving him past Jeremy Roenick into sole possession of tenth place in the franchise’s all-time scoreboard.

Six minutes into the third the Blackhawks got another power play when Noel Acciari tripped David Kampf. Chicago did nothing with this advantage, unfortunately.

Bobrovsky made some terrific saves to hold the lead at two for ten minutes beginning with the Acciari penalty. With five minutes left in regulation the line of Toews, Cagguila and Saad got a great look but Mike Hoffman caught Saad with a high stick to kill the scoring opportunity. Hoffman went to the box for two minutes for whacking Saad in the face, giving the Blackhawks a third power play in the third period.

The Blackhawks wasted another advantage, passing instead of shooting yet again. With three minutes left in regulation the teams were back at even strength and the Hawks were stil chasing two.

Chicago was finally able to get Lehner to the bench for the extra attacker inside the final two minutes and the Hawks were able to draw within one. Dach set up Kane who settled down the puck and rifled it home for his 1,001st career point.

Gustafsson picked up the second assist with Dach on Kane’s 25th of the year. With 75 seconds left in regulation the Blackhawks were within one.

Sadly, Kane’s goal was it for the offense. Florida was able to scramble and get the puck out of the zone just enough to keep the Hawks away from the net and it was the Panthers who extended their five-game win streak to six.

Kane skated 26:05 and led Chicago with six shots on net. The one went in late in the third.

Dach had another good performance on his birthday. He was credited with one goal, one assist, one blocked shot and two takeaways in 18:27.

Chicago’s other rookie, Adam Boqvist, had a nice night as well. He skated 20:27 and was credited with two shots on net, two blocked shots and a team-leading four hits.