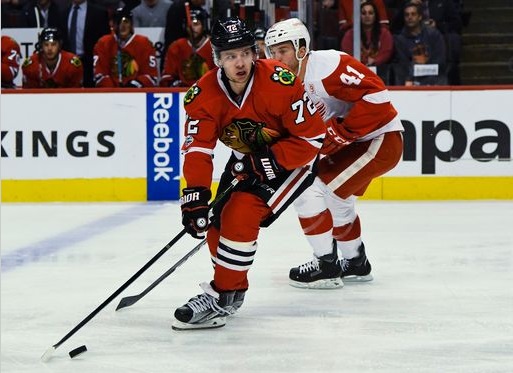 The Blackhawks got off to a great start on Tuesday night, and then slammed their game into neutral and let the Red Wings make things interesting.

Chicago came out flying against Detroit and knocked the Red Wings back on their heels. Brian Campbell scored on the Hawks’ second power play of the night 10:04 into the game.

Richard Panik expanded the lead to 2-0 only 26 seconds later.

The Hawks dominated every part of the first period. Chicago had three power plays, scoring on one advantage, and out-shot Detroit 17-6 in the opening 20 minutes of action. Corey Crawford looked good and the Wings couldn’t get out of their own way.

It was painfully clear that the Blackhawks had taken their foot off the gas when the second period started. Detroit immediately put the puck into their offensive zone and kept it there until Andreas Athanasiou scored his eighth of the season 97 seconds into the period.

At 9:09, Tomas Tatar scored his ninth of the season to tie the game and Detroit was dominating the Hawks to the extent that Chicago had controlled the play in the first.

Chicago’s third line got the Hawks back into the game late in the second when Tanner Kero put home a loose puck in front of the net for his first of the season.

Unfortunately the dreaded goal-in-the-final-minute-of-a-period showed up when Luke Glendening tied the game at three with 19 seconds left in the middle period.

The second was a hideous period for the Hawks, who allowed 20 shots on Crawford while firing 11 at Petr Mrazek.

Chicago put a better push on in the third period, out-shooting Detroit 15-9 including two power plays. But neither team was able to break through the tie and the game headed to overtime. The Blackhawks put 42 shots on net in regulation but weren’t able to beat a struggling Red Wings team.

Thankfully, Justin Abdelkader is still an idiot and the Blackhawks were able to take advantage.

Abdelkader was whistled for boarding Niklas Hjalmarsson with 16 seconds left in regulation, and the Blackhawks made the Wings pay quickly in overtime. Duncan Keith finished the job 38 seconds into free hockey.

The Blackhawks’ 43rd shot on net finally finished a game that looked to be completely under control early. Crawford made 33 saves in the win.

Chicago’s third line of Panik, Kero and Ryan Hartman stayed hot. Hartman finished with two assists in the game, while Panik scored his tenth of the season with an assist, three hits and two takeaways. Kero won half of his 16 faceoffs while being credited with one blocked shot, two hits, one takeaway and four shots on goal with his first marker of the campaign.

Keith had a two-point night (one goal, one assist) while blocking two shots with one takeaway. Hjalmarsson blocked a team-high three shots, while Andrew Desjardins and Panik registered a team-leading three hits. Desjardins skated only seven shifts (6:12) and Jordin Tootoo was on the ice for only 5:55 in the game.