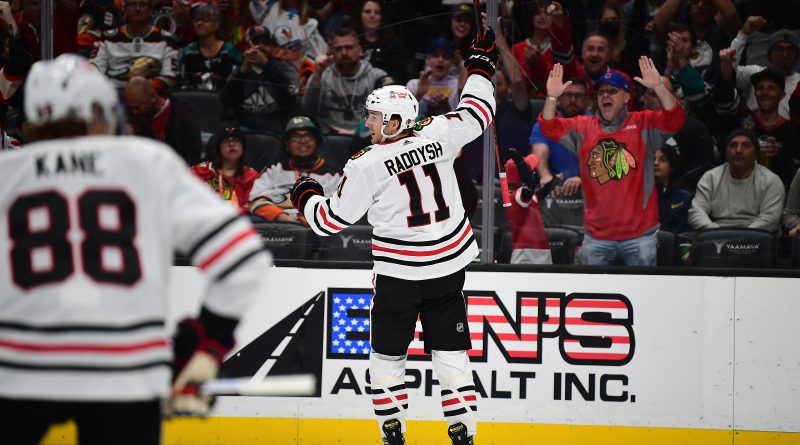 You just have to love the 9:30 PM local starts in the middle of the week. Especially a couple days after a “disheartening” trade deadline… at least that’s the word Jonathan Toews used to describe it earlier on Wednesday.

Friendly faces moving on to other teams sucks. But competing on the ice still has to happen between the deadline and the end of the regular season, and there are new players competing for ice time with the Blackhawks this season and beyond.

Which gets us to the roster construction for Wednesday night’s game in Anaheim. Erik Gustafsson was in the lineup in place of Alex Vlasic. There is no good reason for Gustafsson to every take another NHL shift for the Blackhawks after the deadline if there are seven defensemen on the NHL roster. Zero. We know who/what he is as a player and that player should have been on waivers 3 months ago.

Anyways, Gustafsson dressed and the Blackhawks played a game. And one of the guys acquired in one of those “disheartening” trades continues to look like there’s some potential there. Taylor Raddysh scored a power play goal in the first period, his second in his third game since being traded to the Hawks.

Patrick Kane picked up his 53rd assist of the year on the Raddysh goal. Raddysh’s former Erie teammate, Dylan Strome, had the other helper.

Kevin Lankinen wasn’t tested much officially in the first period, but he looked great. Anaheim was credited with just four shots on goal in the opening 20 minutes; the Blackhawks were credited with nine. And the game was tied at one after one.

The second period came and went relatively quickly; it’s almost as though the Blackhawks knew the fans who stayed up to watch this one weren’t going to refill their coffees after the first period so they needed to get to work. Lankinen was superb in the second period, stopping 14 Ducks’ shots in the period.

The Hawks got a power play in the middle of the period and Kane made the Ducks pay.

The Blackhawks scored only the one goal in the period and were credited with only seven shots on net, not including this attempted “Michigan” from Kirby Dach.

Chicago took a one-goal lead to the third period. Sam Lafferty was having an impressively disruptive game, doing everything but finish at the net. He showed good speed and a good handle… but couldn’t complete the play on a number of occasions.

Nine minutes into the third, after he delivered a big hit on one end of the ice, Reese Johnson dropped the gloves with Simon Benoit. Benoit got the better of the fight, landing a few head shots before wrestling Johnson to the ice. Johnson, of course, was playing in his first game since Dec. 11, so getting his ass kicked wasn’t maybe the best idea.

With 6:32 left in regulation, Carrick picked up his second goal of the night and the game was tied at two.

With 3:50 left in regulation, Riley Stillman blasted a shot from the point that was redirected by a driving-by Strome, who beat Carrick to the front of the net when the Ducks’ lone goal scorer went for the hit instead of the puck with Strome in the corner before the rubber found Stillman at the point.

Kane picked up his third point of the night with the second assist on Strome’s go-ahead goal.

Alex DeBrincat scored into the empty net with 63 seconds left in regulation to seal the deal. The goal is DeBrincat’s 35th of the season.

Lankinen had a really nice night, stopping 27 of 29 in his first start as “the man” in Chicago after the trade deadline.

Strome had another really good night. He now has 16 points (nine goals, seven assists) in 10 games in the month of March. He also won two-thirds of his faceoffs in this game (14 of 21). Apparently the only guy who could contain his offense was Jeremy Colliton… and former Erie Otters had three of Chicago’s four goals on the night.

And we say it again for the people in the back,