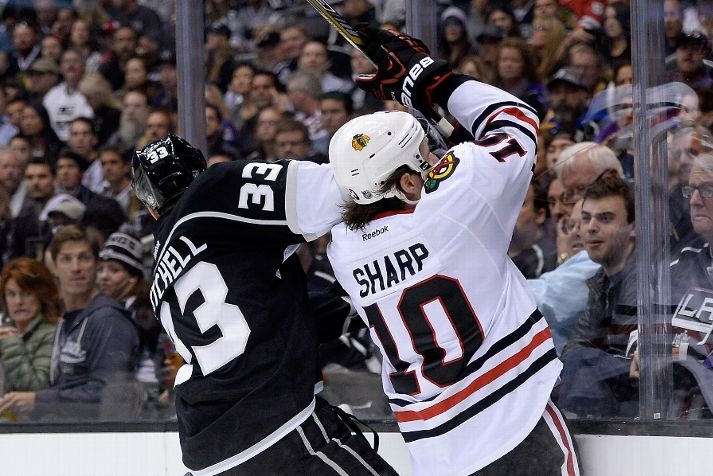 The LA Kings went home and handled their business, taking away early momentum in the game and now holding a 2-1 lead in the series.

Jonathan Toews said before the game that the Hawks needed to play “pissed off” in Game Three, and the captain led by example early on. Toews scored a short-handed goal to give the Hawks the lead 5:26 into the game, and added a second goal at 13:19 to put the lead in Chicago’s hands once again.

Unfortunately, the Hawks’ other three lines didn’t get the memo.

Slava Voynov scored a goal on the same power play that saw Toews tally the short-handed goal, and the first period ended with the Hawks leading 2-1. Chicago won the majority of the faceoffs in the opening 20 minutes, put 10 shots on net and brought a lot of energy.

But the second period saw the Kings take control of the game, and it was an all-too-familiar storyline for the home team.

The Kings’ line of Tyler Toffoli, Jeff Carter and Tanner Pearson has exploited the Hawks throughout the series, especially in the last five periods of the series.

Eight minutes into the second, Carter – who had a third period hat trick in Game Two – found himself all alone in front of Corey Crawford and tied the game. Johnny Oduya attempted to clear a puck from behind the net, but it hit an official and was kicked in front of the net by Pearson to Carter while Oduya and Michal Handzus watched.

A little more than six minutes later, it was Toffoli’s turn. Carter hit him with an outlet pass and he blew past Oduya and Niklas Hjalmarsson. Toffoli flipped a shot on net that Corey Crawford thought he stopped, but it slipped under him and into the net to give LA their first lead of the game.

In the third, Michal Rozsival took a terrible high-sticking penalty on Kyle Clifford. The Kings didn’t convert on the power play, but Drew Doughty scored the eventual game-winning goal two seconds after the advantage ended. On the shot, Oduya attempted to block the shot but slid through the play; Crawford didn’t get a good look at a missile that was past him before he knew it was coming.

Patrick Sharp scored a goal with four seconds left to bring the Hawks within one, but the goal was as much of a celebrity guest appearance as David Beckham in the stands. The Hawks line of Sharp, Handzus and Patrick Kane was held without a shot attempt in the first period and struggled to get any rhythm thoughout the game (again). It wasn’t until seven minutes into the third period that coach Joel Quenneville replaced Handzus on that line with Ben Smith.

Andrew Shaw returned to the lineup and finished tied with Bryan Bickell for the team lead with six hits. He skated 12:28 but failed to win one of seven faceoffs in the game. Handzus led the team with three blocked shots and won eight of 12 faceoffs, but was an anchor on the line with Kane and Sharp again. Handzus was in the box after closing his hand on the puck early in the first when Toews and Voynov opened the scoring for both teams.

Crawford didn’t have a good second period, allowing two goals against only four shots. But for as mediocre as he was in the middle frame, he was very good in the third; Crawford stopped 17 of 18 shots in the final 20 minutes. Unfortunately, the one he allowed to Doughty held up as the game-winner.

On the other end of the ice, Jonathan Quick three goals against 27 shots in the win.

The Hawks power play was a doughnut once again, this time doing nothing on four attempts with a (theoretical) advantage. Los Angeles was able to convert one of three power plays, and Doughty scored just after the third ended.

Brandon Bollig dressed and skated 5:32 in the loss.

The last two times the Hawks trailed 2-1 in a postseason series, they were able to come back and win the series (St. Louis earlier this year and against Boston in the Stanley Cup Final last year). They’ll get a chance to take home ice advantage back on Monday night in LA.