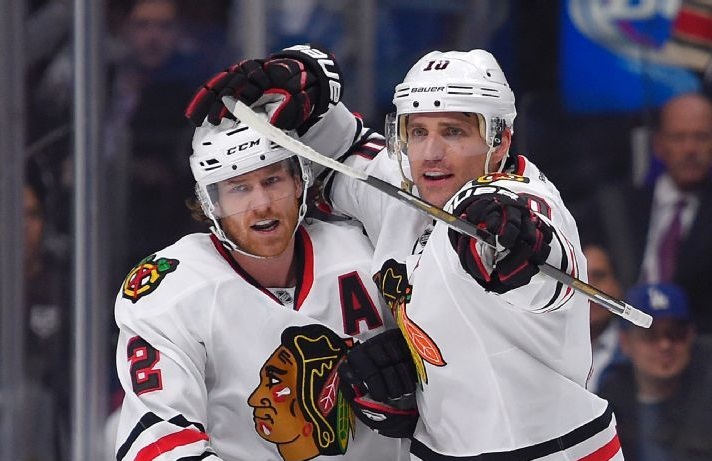 The Blackhawks were 11-7-1 when tied after 40 minutes entering Wednesday night, while the host Kings were only 3-1-4 when tied after two periods this season. But LA was able to emerge with a late rally and defeat the Hawks 4-3 in the first game after the All-Star Break. The story of the night was Jeff Carter’s continued dominance of the Hawks. He scored the first two goals for the Kings and nearly added a short-handed goal to complete the hat trick; he was also LA’s best player at the dot, winning nine of 15 faceoffs in the game.

Patrick Kane got the Hawks on the board less than two minutes into the game, scoring his 23rd of the season. But Carter would score his first of the night less than seven minutes later.

Kane then fed Patrick Sharp for a lethal power play goal exactly three minutes after Carter’s goal. Chicago would hold that lead until Carter’s second of the game came on a Kings power play 1:45 into the second period.

The score would stay tied until Andrew Shaw gave the Hawks the lead back 2:25 into the third. Teuvo Teravainen, who spent most of the second period on the bench, led the rush and pushed the puck towards Shaw, who beat Jonathan Quick for his third goal in three games.

Tyler Toffoli, who was just brought off IR (mono) earlier on Wednesday, tied the game at 13:49 and the Kings grabbed the momentum. Jake Muzzin unloaded a shot from the blue line and beat Crawford for the game winner; he may have received some help as Carter’s backside brushed Crawford’s mask on the play.

Like Carter, Johnny Oduya was on the ice for each of the Kings’ first three goals. Oduya had a rough night, finishing minus-two with two blocked shots in 18:33 on the ice. Coach Joel Quenneville mixed up the blue line again, skating David Rundblad with Duncan Keith and Brent Seabrook with Niklas Hjalmarsson. Oduya was with Rozsival, a pair responsible for a good amount of alcohol consumption in Chicago during Hawks games recently.

Teravainen only skated 8:58 but did pick up the only assist on Shaw’s goal. Jonathan Toews was the Hawks’ best player at the dot, winning 16 of 26 faceoffs, but was also minus-two with three missed shots in the game. He had a great opportunity to tie the game with Crawford on the bench late in regulation but hit the post.

For LA, Toffoli added an assist to his game-tying goal and Anze Kopitar picked up two assists to join Carter with multi-point nights.

Kane and Sharp had two points each in the loss for Chicago. Keith and Rundblad also had assists for the Hawks.

The Blackhawks will be back on the ice Friday night against the league’s best team in Anaheim.