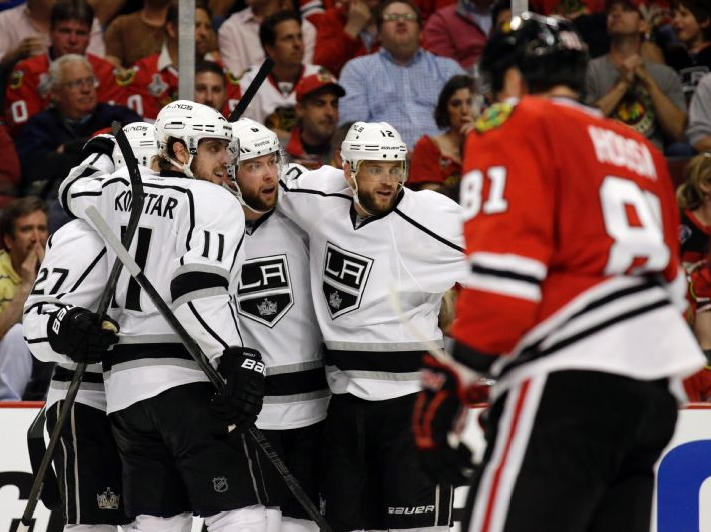 That, dear friends, is why you don’t start talking about a dynasty with a 1-0 series lead against a very good, dangerous team. Coach Joel Quenneville was admittedly confused after the game. He told the media he didn’t remember seeing a team play that well for 38 minutes, and then completely crap the bed in the final 22.

The Hawks took a 1-0 lead on a filthy backhand goal from Nick Leddy in the first period.

They took a 2-0 lead on a nice breakaway snipe from Ben Smith at 1:40 into the second.

After Smith’s goal, Brent Seabrook skated back and whacked Corey Crawford on the shin pads. It appeared the confident Blackhawks believed two goals would be enough against the Kings on Wednesday night; Crawford had been dominant for most of these playoffs, and they were playing exceptionally in the early going.

But a shot tipped through Crawford by Justin Williams got LA on the board late in the second.

And the wheels came completely off.

The Hawks allowed three goals in the first nine minutes of the third period to give LA a two-goal lead, and they would add a couple more to blow the Hawks out of their own building. When the dust settled, the score was 6-2 in favor of the visitors.

Jeff Carter had four points – including a hat trick – in the third period alone to lead the onslaught.

But rewind the tape to the middle of the second period. The Hawks were rolling, and they got a 2-on-1 breakaway that was almost perfectly executed by Kris Versteeg and Seabrook. Versteeg fed Seabrook, who looked to have an open net to put the Hawks up three.

But Jonathan Quick had other ideas.

That save, followed by a series of stupid penalties, flipped the momentum of the game in a way the Hawks – and their fans – haven’t seen in a long time.

How bad was it?

The last time Crawford allowed more than four goals in a game: Nov. 16 in Nashville. He had allowed four in a game only seven times since that game, including three times in these playoffs.

Brandon Bollig took a terrible interference penalty nowhere close to the puck early in the third period, and watched the Kings tie the game from the penalty box.

Peter Regin didn’t play a bad game; he almost had a goal. But he won only two of 10 faceoffs.

Jonathan Toews was credited with zero shots on net.

Perhaps the only bright spot in the game for the Hawks was Smith, who scored his second goal of the postseason but was limited to only 13:33 in spite of being strong on the puck all night.

The Hawks will have two days to think about the final 23 minutes of Wednesday night’s debacle before playing Game Three in Los Angeles on Saturday. Hopefully Andrew Shaw is in the lineup when the puck drops in California.