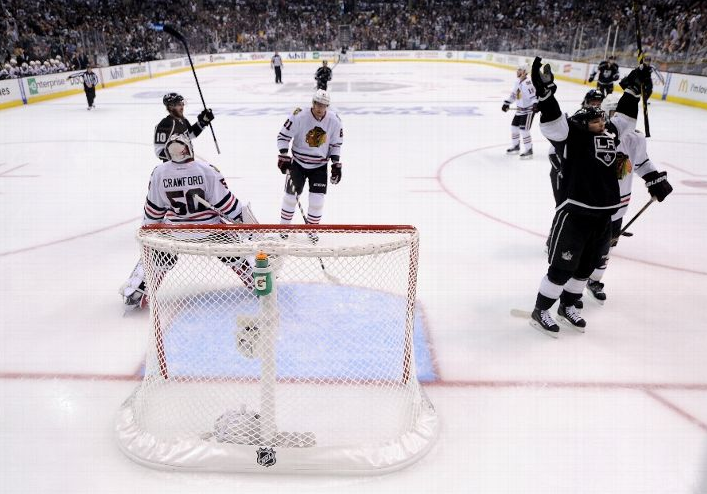 Before the puck dropped, most of the Blackhawks said Game Four needed to be their best.

After the puck dropped, not many of them did much to back up their words. And now they’ll return to the United Center for a do-or-die Game Five. Coach Joel Quenneville made a number of roster adjustments to open the game, inserting Peter Regin for Brandon Bollig and putting Patrick Kane on a line with Jonathan Toews and Bryan Bickell. He also opened the game with Marcus Kruger between Marian Hossa and Patrick Sharp, moving Michal Handzus off the second line.

None of the changes mattered.

Special teams were once again the Hawks’ Achilles’ heel, with the penalty kill allowing two goals in the first period as the Kings hung three quick goals on Corey Crawford.

On the first goal of the period, a power play tally for Jake Muzzin, Jeff Carter was allowed to set up in front of Crawford without anyone paying attention whatsoever. Muzzin had all day; Crawford didn’t see the shot until it bounced off the back of the net.

On the second, Duncan Keith carelessly gave the puck away in the corner. Anze Kopitar threw the puck on net, and Marian Gaborik tipped it past Crawford. Gaborik, like Carter, got to the doorstep without much resistance.

On the third LA goal of the opening 20 minutes, a power play goal for Dustin Brown, not one but two Kings were able to post up in front of Crawford without notice from Chicago’s defensemen. The puck was shot in, and Justin Williams made a nice cross-crease pass to Brown for the easy score.

In the second period, Drew Doughty made the lead four goals, with another assist going to Kopitar. The Doughty shot appeared to be tipped by either Williams or Dwight King, who were (you guessed it) easily parked in front of the Hawks’ netminder.

In a series with a lot of star power, Doughty and Kopitar have been two of the better players every night; they once again played exceptional hockey on Monday night. Doughty has been the best defenseman in the series (and it isn’t close), and Kopitar has been able to neutralize Toews.

Brandon Saad scored 80 seconds after Doughty’s goal, flipping a nice backhand shot past Jonathan Quick. Quick may have been bored in the game’s first 40 minutes; he faced 16 shots and saw most of them easily in the first two periods.

Bryan Bickell added a second goal for the Hawks at 9:29 into the third, but the hole was simply too deep for the Hawks to climb out of on this night.

The Kings won most board battles. They beat the Hawks to almost every loose puck. They executed their game plan with ease in the first two periods and took advantage of a team that simply didn’t match their compete level.

Many will point fingers at the Blackhawks goaltender, but Crawford didn’t get much help (again). After an exceptional run through the first two rounds of the playoffs, Crawford has been torched by the Kings in the last seven periods.

Toews had an assist on Bickell’s goal, but won only seven of 21 faceoffs. Jarrett Stoll won 16 of 24 to lead the Kings at the dot, where LA has held an enormous advantage in this series. Michal Handzus dressed, but saw only six shifts (4:28) in the game.

Regin played 11:08 and won five of nine faceoffs in the game. Kris Versteeg was minus-two in 9:54. Michael Rozsival skated 20:02 and led the team with six hits, while Niklas Hjalmarsson blocked a team-high five shots in 18:02.

If the Blackhawks don’t want to shake hands on their home ice, they’ll have to be a helluva lot better than they were in either game in Los Angeles.