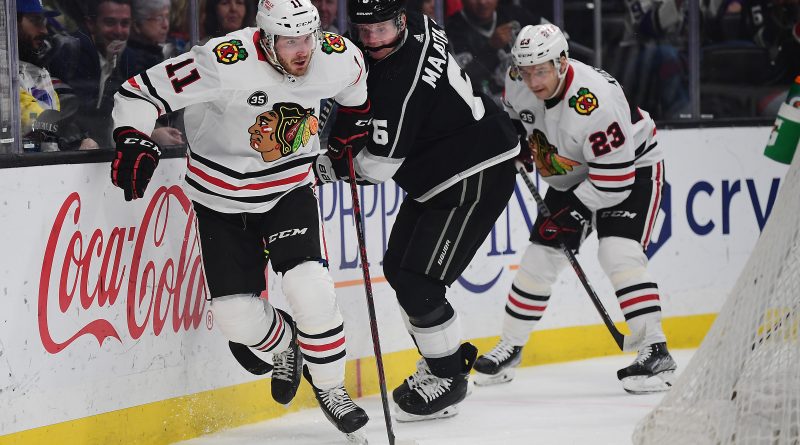 The Blackhawks needed overtime to take a second point against the last place Arizona Coyotes on Wednesday night. So how would they look the following night in Los Angeles against a potential playoff team in the Kings?

The first period was a dumpster fire. Phillip Danault scored a power play goal at 11:58 into the first to give the Kings a 1-0 lead, and the Hawks were fortunate to only trail by one after 20 minutes. LA out-shot the Hawks 17-6 in the first period and spent most of the first in their offensive zone.

The second period started the same way. It took the Blackhawks ten minutes to register a shot on net and Anze Kopitar doubled the Kings’ lead at 9:16. At that point, the two-goal lead felt like about 20 based on the limited amount of offense the Blackhawks were generating.

But a power play gave the Hawks an opportunity to get back into the game.

With 4:47 left in the second period, it appeared Patrick Kane scored a power play goal. But a takeaway by Seth Jones popped the puck into the air and Kane needed to get back across the blue line before Alex DeBrincat entered the zone… and it wasn’t clear that the two Chicago superstars’ paths crossed fully before DeBrincat’s skate entered the zone. The Kings challenged the play and the war room upheld the goal, giving the Hawks a goal — and a power play resulting from the lost challenge.

NHL explanation: “There was no conclusive evidence to show that Alex DeBrincat entered the Los Angeles zone before Patrick Kane tagged up at the blue line. Therefore, the call on the ice stands.” #Blackhawks https://t.co/iroTOwDS6H

The goal is Kane’s 91st point of the season. DeBrincat’s 36th assist on the play established a new career high for him in that regard and tied his previous career-high of 76 points in a season.

Los Angeles was back on the attack in the final two minutes of the second period but Collin Delia was able to come up with a couple huge saves. Jonathan Toews was on the ice for a 3:19 shift to close the period; he finally got off the ice with 1.4 seconds left when a puck deflected out of play. Dominik Kubalik was stuck out there almost as long, and Toews was visibly pissed when he arrived on the bench.

Officially, the Kings out-shot the Hawks 11-5 in the second period and carried a 2-1 lead into the third period.

After two periods, it appeared someone on the coaching staff finally got the memo that the organization is looking to the future. Calvin de Haan had skated 8:24 and Riley Stillman had skated 8:56 through 40 minutes; Alec Regula was on the ice for 13:39 and Alex Vlasic skated 14:11. The two youngsters continue to look ready for the NHL, so it’s good to see them getting rewarded with ice time.

So how do you come back from a one-goal deficit? Generating some offense is a good idea, and the Blackhawks had as many shots on net through 40 minutes as the Kings had in just the second period.

Taylor Raddysh went to the box 48 seconds into the third period. The Hawks were able to get through the two minutes but obviously going short-handed almost immediately is not an ideal way to start a comeback bid.

Boris Katchouk was able to bait Adrian Kempe into a penalty at 4:18 into the third to give the Hawks an advantage. Chicago did nothing with their own power play.

It took almost eight minutes for the Blackhawks to put a second shot on net in the third period; the offense wasn’t there yet again but the Kings weren’t running away, which kept the door open for drama.

With just a little more than eight minutes left in regulation, Andreas Athanasiou was able to poke the puck away from Jake McCabe (who was having a strong game) and took off the other way and scored a breakaway goal on a nice move.

It appeared Delia might have been shaken up on the move by Athanasiou. He wasn’t able to recover on a cross-ice pass that resulted in a Trevor Moore goal just 15 seconds after the Athanasiou goal and not only did the Kings suddenly have a 4-1 lead but Delia was being helped off the ice with an injury. Kevin Lankinen was called on for the final eight minutes.

Absolutely nobody wanted to stop the puck in the final four minutes of the game. Chicago finished with 16 shots on net in the game — one less than the Kings had in the first period. Delia is now injured and the offense is still missing in action.

Regula finished the night skating 20:34 and Vlasic was on the ice for 18:27. They were credited with two blocked shots each.

DeBrincat (three), Kane and Kubalik (two each) were the only Blackhawks skaters to be credited with more than one shot on net. Of course, when those three guys combined for seven of the team’s 16 total shots on net, it’s hard for many other players to light up that category.