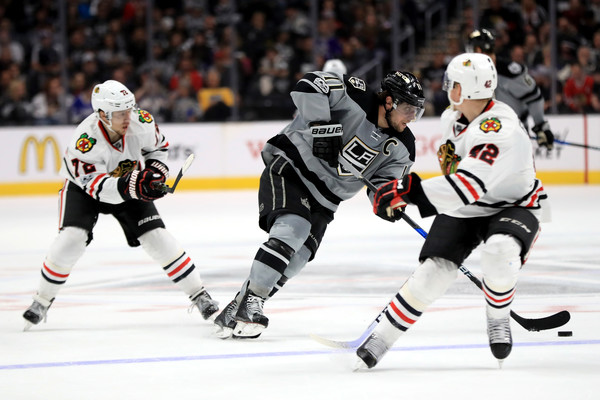 The Blackhawks bid the 2016-17 regular season a fond farewell in Los Angeles on Saturday evening with a nearly-complete roster. Only Artem Anisimov and Niklas Hjalmarsson were missing from the regular lineup, and both are expected to be ready for Game One of the Stanley Cup Playoffs.

On the other side of the ice, the Kings closed the book on 44 years of excellent broadcasting from Bob Miller with tributes througout the game. The Hawks got the party started six minutes into the game when Jonathan Toews scored his 21st of the year.

Both teams kept getting the puck on net but Toews’ goal was the only marker through 40 minutes. Corey Crawford and Jonathan Quick both faced 17 shots in the first two periods.

Arguably the best line for Chicago in the first two periods was their third. Marian Hossa, Ryan Hartman and Marcus Kruger combined for six of the Hawks’ 17 shots, led by three from Hossa.

Dennis Rasmussen went to the box early in the third and the Kings tied the game 61 seconds later on Tyler Toffoli’s 16th of the year.

With six minutes left in regulation, Patrick Kane set up bonus boy Artemi Panarin for his 31st of the year.

After the Hawks won an offensive zone draw, keeping Quick in net, the Kings were able to storm the other way and Dustin Brown tied the game with 55 seconds left in regulation.

Unfortunately, Drew Doughty ended the game 27 seconds into overtime. Chicago lost their final four games of the regular season, three of which came by one goal.

Panarin finishes the regular season with 31 goals and 43 assists. The Hawks will need some help if he’s going to finish outside the top ten in the league, thereby collecting bonus money that will impact next year. To his credit, coach Joel Quenneville has given Panarin every opportunity to produce and he’s been Chicago’s hottest offensive player down the stretch.

Kane finished the regular season with 89 points, the second-highest total of his career (behind only last year). He picked up his 55th assist of the season on Panarin’s goal, a number he eclipsed only during the 2009-10 season and last year.

John Hayden led the Hawks with five hits. Brent Seabrook had seven blocked shots in the game. Hossa and Hartman finished with a team-leading four shots on goal each.