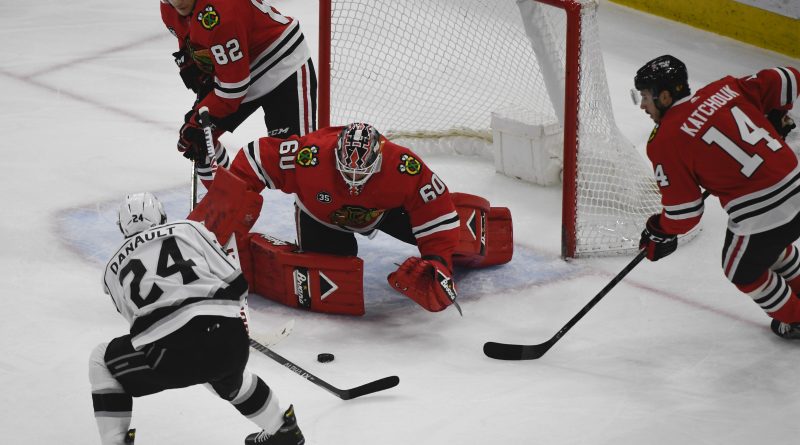 With a couple weeks left in the regular season, the Chicago Blackhawks arrived at an organizational epiphany: it’s time to see what some of the kids can do.

It’s really hard to win a hockey game if you can’t generate any offense. And the Blackhawks are being reminded of that in almost every game recently. Tuesday night, the Los Angeles Kings came into the United Center fighting for playoff position and the Hawks never showed up.

It took the Blackhawks 10:10 to put a shot on net in the first period. The Kings out-shot the Hawks 14-6 in the first, scoring twice. Former Blackhawks prospect Phillip Danault set up Trevor Moore for the first goal and scored the second, just as a painful reminder of what could have been.

The Kings let the Hawks hang around, though. Their inability to score a third goal kept the door open for Chicago go crawl back into the game and there was a brief glimpse of hope late in the second. Taylor Raddysh scored his third goal as a member of the Hawks to cut the lead in half.

The Kings scored 33 seconds later to push the lead back to two.

LA out-shot the Hawks 13-5 in the second period. Collin Delia wasn’t great, but he was getting absolutely nothing from his skaters.

Jordan Spence made it 4-1 in favor of the visitors five minutes into the third and the Hawks appeared to leave it in neutral. The Hawks got three power plays in the first 12 minutes of the third and generated absolutely nothing. Reichel had a couple really good chances in the middle of the third but couldn’t quite finish. The same can’t be said for most of the other skaters in red.

At this point, you have to honestly wonder if Derek King even wants to come back if this is what he’ll have to work with next year…

After successfully killing a penalty, the Hawks were able to find the back of the net a second time with 3:18 left in regulation. Philipp Kurashev made a terrific play; he lost his stick but kicked the puck ahead to Raddysh, who set up Patrick Kane for the goal.

Kane now has 30 points in his last 18 games, which is remarkable considering how brutal the Hawks’ offense has been lately.

Blake Lizotte scored his second of the night with 96 seconds left on the clock to reach the over for those financially interested in such things. The Kings were now up 5-2.

Reese Johnson decided to throw some hands with 80 seconds left in regulation and he was awarded the final minute in the penalty box as his teammates limped to the finish line. As Eddie Olczyk said on the broadcast, you like to see the energy but at that stage in the game it was a waste.

Each side was credited with nine shots on net in the third period. The final shot count was 36-20 in favor of the Kings.

As the Hawks at least dressed some younger players in this one, the amount of ice time they received left a lot to be desired — again.

Regula actually got 17:22 and some time on both special teams. He was credited with two shots on net, two takeaways, one hit, one blocked shot and received four penalty minutes.

Vlasic got 13:57 — none of which came on special teams. He was the only defenseman to not skate on the penalty kill in the game and had the lowest ice time on the blue line.

Reichel put two shots on net in 15:17. He got plenty of power play action (4:21) but didn’t attempt a single faceoff.

Reese Johnson was credited with eight hits in 12:10.

Raddysh, Kane and Seth Jones were the only Blackhawks skaters credited with more than two shots on net; they were each credited with just three.

Raddysh had another strong game, though. He looks like a player. He was also credited with eight hits in the game. And had a team-leading two points. But… he only got 13:10 of ice time?