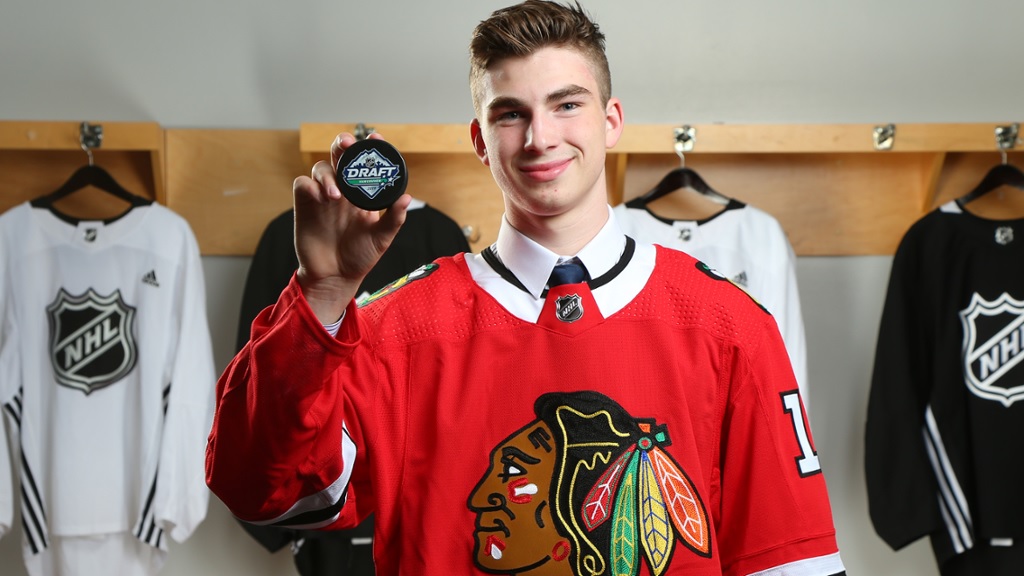 Now that the dust has settled from the first round of the 2019 NHL Draft, Blackhawks fans are waking up to the reality that Kirby Dach is a member of the organization (which we were the only outlet to predict).

What did the Blackhawks get in Dach? If you read our preview piece or anything since the pick was made you know they added a big, playmaking center. Comparisons range everywhere from Ryan Getzlaf to Mark Scheifele to Ryan Johansen – any of which would be a huge upgrade to a Hawks system that lacked size at the forward position.

Hear from the newest member of the #Blackhawks organization, center Kirby Dach! pic.twitter.com/MZP1Ar5t8O

Dach is immediately the best forward in the Blackhawks system. He adds size and playmaking ability at the center position the Blackhawks simply do not have in any other prospect. He joins an organization that had drafted centers of a certain size – roughly 6-feet tall and 180-190 pounds – over the past four years.

However, the Blackhawks have added some size at the center position by trade over the past 12 months. Dylan Strome won’t turn 23 until March 7 and, at 6-3 and 200 pounds, is bigger than any prospect in the Hawks system before they selected Dach. Strome had 51 points in 58 games after he was acquired from Arizona for Nick Schmaltz last year.

MacKenzie Entwistle (6-3, 181) was also acquired from Arizona; he was the key piece in the deal that sent Marian Hossa’s contract to the Coyotes. With Strome, Dach and Entwistle in the mix the Blackhawks have some good young size now.

Two other centers who were drafted recently, Evan Barratt and Jake Wise, will be back in the NCAA ranks this season but are worthy of attention. Barratt dominated the Big Ten at Penn State last year and emerged as one of the better forwards in college hockey; Wise was a highly regarded prospect until injuries slowed him down in his draft year and he was limited again in his freshman year at Boston University last year. Both could be in the mix for an NHL roster spot in the next few years.