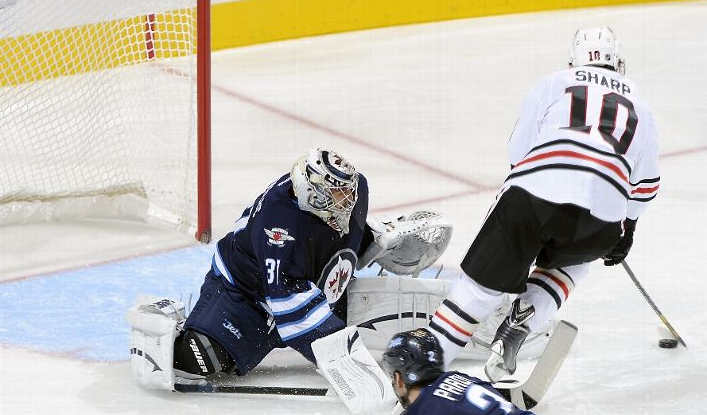 The story before Saturday’s game was all about Jonathan Toews playing “at home” in Winnipeg, but it was the kids on the Hawks roster that won the day. A second period outburst propelled the Blackhawks to another big victory, this time over the Jets.

The first period ended with the score tied at one. Corey Crawford spent a moment down and appeared to be a little banged up after there was some contact with Blake Wheeler, but he was able to stay in the game and play well. The second 20 minutes was when the game was effectively over for Winnipeg.

Brandon Bollig and Nick Leddy each had one goal and one assist in the game and Marcus Kruger added two assists as the Hawks used a three-goal outburst to fly away from the Jets. Chicago scored three times in spite of only putting seven shots on net in the middle frame and were able to take Winnipeg completely out of the game.

Patrick Sharp scored his third goal of the season between the goals by Bollig and Leddy. The Hawks’ three goals came in the first six minutes of the second period. In the third, Ben Smith added an insurance goal with a redirect of a Bollig shot.

Kruger played a magnificent game. He was great at the dot, winning 11 of 15 faceoffs, with his two assists. His second assist of the game came on the goal scored by Bollig, who finished tied for the team lead with two hits and was plus-three in the game. Marian Hossa, Jeremy Morin and Andrew Shaw were also credited with assists up front for the Hawks.

On the blue line, Niklas Hjalmarsson scored the Hawks’ one goal in the first period and Leddy added his in the second. Duncan Keith was credited with an assist and three blocked shots in the game; Michal Rozsival led the team with five blocked shots for the afternoon.

Crawford had a fantastic game in spite of the early injury concern. He allowed only the one goal against 27 shots.

In net for the Jets, Ondrej Pavelec allowed the first four goals for the Blackhawks while facing only 14 shots. He was pulled after Leddy’s goal, giving way to Al Montoya. Winnipeg’s backup allowed one goal – to Smith – while facing only ten shots.

In his homecoming game, Toews skated only 18:25 and won 10 of 19 faceoffs. He was plus-one with only two shots on goal, and heard a few boos during the game.

The Blackhawks have won their last three, outscoring Minnesota, Ottawa and Winnipeg 16-7 (with five of those seven goals by the Senators). Chicago killed the Jets’ only power play on Saturday afternoon, and have killed four of five over their three game win streak.