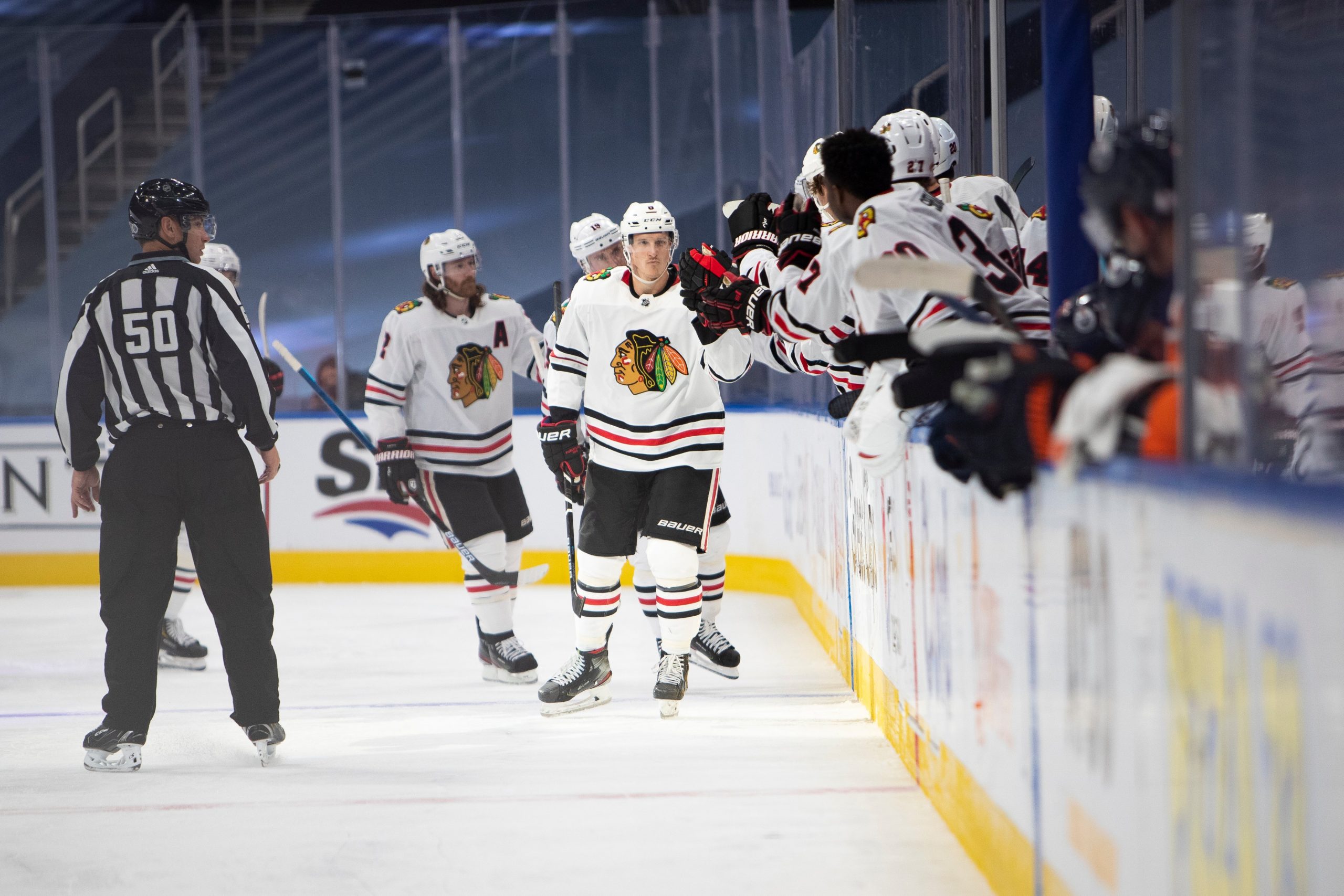 After months without hockey, the Blackhawks returned to the ice to begin their qualifying series against the Edmonton Oilers on Saturday. The Oilers came in at home, but without home fans. Because of COVID-19 the arena was empty – except the skaters.

And Chicago’s skaters came to play.

In the eight minutes that followed the Blackhawks stunned the home team.

Dylan Strome started the party at 5:51 with a goal he banked in off Mike Smith’s backside.

Chicago then got an opportunity with the advantage and made it count. Dominik Kubalik found Jonathan Toews with a filthy pass and Chicago’s captain gave Chicago a 2-1 lead.

That was only the beginning of a huge afternoon for Chicago’s top line.

Kubalik picked up his second assist of the period less than 90 seconds later when Brandon Saad extended the lead to 3-1.

That line got on the board again at 12:57 when Toews accepted another ridiculous pass from Kubalik and made the score 4-1.

When the horn sounded after 20 minutes, Kubalik had three assists. Toews had two goals and Saad also had two points.

Early in the second the Hawks made another mistake. Olli Maatta went to the box and Edmonton scored a second power play goal, this time coming from Leon Draisaitl.

The Oilers could have had some momentum, but the Blackhawks weren’t done.

Chicago got another power play of their own and this time Kubalik was the scorer, scoring right off the faceoff for his first career postseason goal.

With the score now 5-2, Edmonton made a change in net. Smith departed having allowed five goals against 24 shots in less than 27 minutes on the ice.

The change in net didn’t help the Oilers, and the Blackhawks didn’t let Mikko Koskinen get comfortable. Kubalik scored another power play goal at 17:35 into the second period to make the score 6-2.

With his second goal of the game, Kubalik had five points in his postseason debut.

Toews had three points, adding an assist to his two first period goals.

The Blackhawks had a 32-20 shot advantage after 40 minutes. Edmonton had their chances, but Corey Crawford looked terrific for most of the first two periods. After dealing with COVID-19 himself, Crawford appeared to be in postseason form as the game continued.

Chicago got a power play in the middle of the third period but the Oilers were showing no pushback at all. The Hawks were getting whatever they wanted, dominating possession and finding open passing lanes at will. Frankly, the third period performance of the Oilers should embarass the Oilers.

The Hawks went back to the box in the final four minutes and Edmonton scored their third goal of the game – all on the power play. James Neal scored the goal, but with 3:53 left in regulation and considering the overall play of the Oilers in the third there was little concern for Hawks fans with a three-goal lead.

Edmonton pulled their goalie after the Neal goal and got on the board again. Ryan Nugent-Hopkins cut the lead to two with the Oilers’ second goal in 36 seconds.

Now the game was getting more interesting, and the nerves were back for Hawks fans.

Patrick Kane appeared scored into the empty net with eight seconds left in regulation. A video review took the goal off the board, however, as Kane was ruled to have been offside.

It didn’t matter, however. The final score stood at 6-4 in favor of the 12 seed Chicago Blackhawks.

Toews had a terrific day. He won 16 of 25 faceoffs and had three points. Kane had a power play assist and was credited with seven shots on net but didn’t factor into the offense much; the top line did all the damage that was necessary.

Crawford made 25 saves against 29 shots in the victory.

Calvin de Haan, playing for the first time since hip surgery “ended” his season, skated 21 minutes and was credited with one blocked shot and four htis. Connor Murphy led Chicago defensemen with four shots on goal and was also credited with four hits in 21:34. Duncan Keith led the blue line with 22:24 of ice time.

Adam Boqvist skated 14:39 in his playoff debut. He was credited with three shots on net and one blocked shot.

Kirby Dach, also playing in his first career playoff game, picked up one assist and won two of seven faceoffs in 19:09. He was also credited with two takeaways.