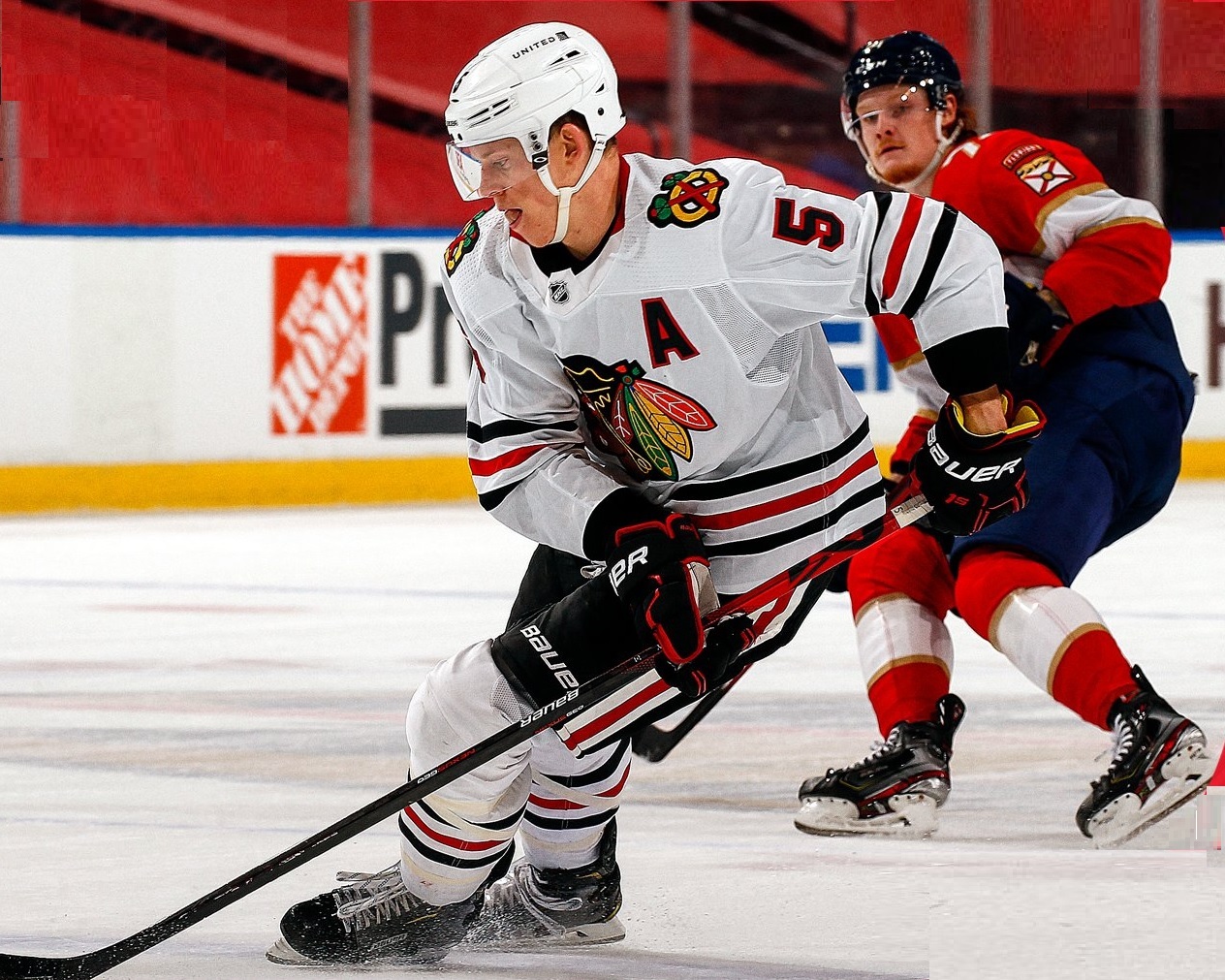 So you’ve given up a league-worst 15 goals in three games. What better time to give a goaltender his NHL debut?

Kevin Lankinen was promoted to the active roster and thrown into the fire against the Florida Panthers on Tuesday night. Forward Brandon Hagel also got the call to jump into the lineup, replacing Matthew Highmore.

The game started in similar fashion to Sunday evening: the Hawks looked okay defensively but struggled to generate a lot of offensive zone time. Neither team was able to put the puck in the net for more than 13 minutes, but a defensive breakdown ended that as Carter Verhaeghe scored his first of the season to give Florida a 1-0 lead.

Less than three minutes later a Patric Hornqvist power play goal made it 2-0 Florida and it felt like déjà vu all over again. Hornqvist’s goal came nine seconds into a Dylan Strome penalty.

Aleksander Barkov did the Blackhawks a huge favor and went to the box 27 seconds after the Hornqvist goal and Chicago went to work.

Then Dominik Kubalik flipped the switch.

Kubalik clearly had the safety off coming in and was set up perfectly to unload his first goal of the season.

That goal brought the Blackhawks within one with 80 seconds left in the first period.

Chicago was out-shot 10-8 in the first period but Lankinen didn’t look awful. Frankly, with a few exceptions the Blackhawks goaltenders have looked okay for a lot of the time this season; but the breakdowns have come on fast and furious and the Hawks haven’t been able to climb out of the holes they’ve been digging.

So when Verhaeghe scored his second of the night, a power play goal, 2:45 into the second period it felt like we were headed back to Five Goals Against Land again.

To their credit, from that point forward the Blackhawks started playing more physically and it paid dividends.

Chicago got another power play and Kubalik went to work again.

Kubalik’s second of the night gave the Blackhawks some momentum. He was shooting almost every time he touched the puck, which helps a scorer get into the scoring column. Jeremy Colliton also bumped him up onto a line with Patrick Kane and Stome, which helps any skater’s confidence.

In the middle of the second period Adam Boqvist was on the receiving end of a big hit. He went off and eventually made his way to the room. He did not return to the Blackhawks bench.

With 5:32 left in the second. Kane got a penalty shot after he was illegally impeded on a breakaway. Unfortunately, his attempt was denied and Florida maintained their one-goal lead.

Until Kane tied the game.

That goal with 50 seconds left in the period tied the game at three.

Chicago out-shot Florida 15-9 in the second period. Lankinen looked good and the defense looked more confident with Boqvist out of the rotation. Nikita Zadorov had five hits through 40 minutes of hockey.

Hagel had the least ice time (7:03) through two periods; Philipp Kurashev (7:38) found himself at the end of the bench as well. Kubalik was credited with six shots on net in the opening two periods.

Andrew Shaw had four penalty minutes resulting from a tripping call coupled with a misconduct call at 29 seconds into the second, leading to Verhaeghe’s second goal.

Two important questions needed to be answered as the third period began: Could the Blackhawks win a game? And would Florida get to five goals?

The good news to open the third period was Boqvist returning to the ice.

Duncan Keith went to the box early in the third but the Blackhawks killed it off well.

Chicago would take the lead for the first time in the 2021 season with 13:54 left in the game. The go-ahead goal came off the stick of Kurashev, his first career NHL goal.

Full marks to the kid for his first career marker, but it was a terrible goal for the $10 million man – Sergei Bobrovsky – to allow.

So would the Blackhawks deal with this new success?

Ryan Carpenter went to the box 27 seconds after the Kurashev goal and Keith Yandle scored on the power play to tie the game. Because of course.

The game got more physical down the stretch but neither team was able to find the back of the net.

Chicago had a 32-25 shot advantage after regulation, led by seven shots on net by Kubalik. Mitchell and Boqvist spent most of the third period on the bench in the close game.

The Panthers had a 3-on-1 one minute into overtime but Lankinen made a huge save to keep the game alive.

Sadly, Frankie Vatrano got Florida their fifth goal of the night 2:50 into overtime and Chicago lost for the fourth time in as many games.

There were plenty of positives from this game despite the loss. Kubalik was a man possessed (two goals, one assist). Zadorov was a wrecking ball (nine hits). Kurashev continues to look like a legit NHL forward. Lankinen played well.

Chicago picked up its first point in the standings for the 2021 season. And, after leading for 0:00 in the first three games, the Blackhawks had a lead for 71 seconds on Tuesday night. Baby steps, people.

Unfortunately the Blackhawks limiting their young defensemen in the third and Colliton’s unwillingness to skate either of them in overtime led to some tired legs on the back end.