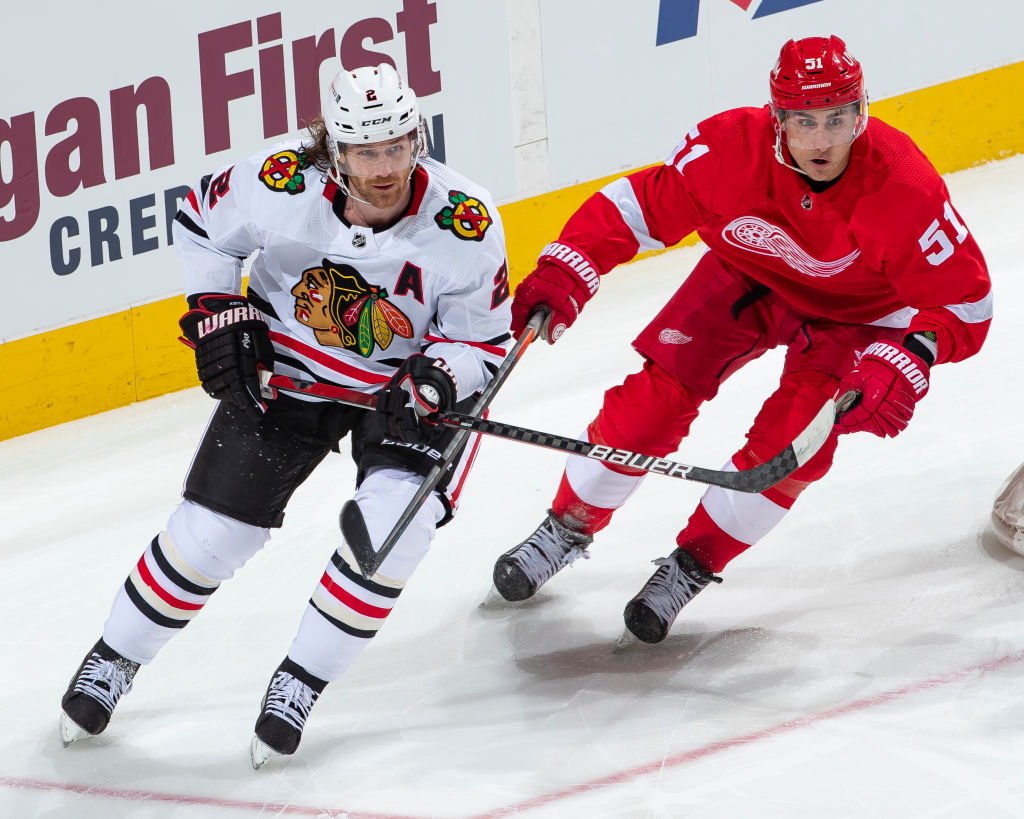 After taking the Red Wings for granted and playing to an overtime victory on Monday, the Blackhawks were hoping for a better start. Coach Jeremy Colliton welcomed both Adam Boqvist and Ryan Carpenter back to the lineup and once again rolled with seven defensemen.

Kevin Lankinen was back between the pipes in front of a national television audience.

Would the Hawks respond with a stronger effort early?

I’ll be honest. I took a nap during the first period.

There were offsetting penalties on Troy Stecher and Dominik Kubalik at 3:46 into the game. Strecher was guilty of tripping Kubalik; the Hawks forward was guilty of selling it a bit too much.

Nothing happened during the 4-on-4 action. Or for the rest of the period for that matter. Jonathan Bernier got the start for Detroit and he looked terrific but wasn’t tested as frequently as the Blackhawks would have liked. After 20 minutes, both sides had nine shots on goal and nothing to show for it.

The second period began with a parade to the penalty box. Pius Suter went to the box 68 seconds into the period and, not surprisingly, Detroit did nothing with the advantage.

Stecher went to the box again at 5:19 but the Hawks killed their own penalty when they had too many men on the ice. Chicago was starting to generate better chances but hadn’t broken through.

When Valtteri Filppula went to the box at 10:12 the Hawks were starting to put more pressure on Bernier. But it was a rookie taking matters into his own hands that changed the score.

Philipp Kurashev made a highlight reel move through the Detroit “defense” and tapped the game’s first goal through Bernier’s legs, eliciting awe from the broadcast crew and those watching the game.

Lankinen picked up his second assist of the season on the goal; Duncan Keith had the other helper.

Chicago would get another power play later in the period but couldn’t get another one past Bernier. After 40 minutes of hockey the Blackhawks held an 18-17 shot advantage and 1-0 lead on the score board.

Lankinen made some big saves in the opening 15 minutes of the third period to preserve the shutout, but Lucas Carlsson may have made a game-saving play when he blocked a shot at a wide open cage with Lankinen off the side with the clock showing 4:30 left in regulation.

how is the goalie literally the furthest player on the ice from the actual net pic.twitter.com/kx7V41VtcD

Detroit spent a lot of time skating in circles and missing each other with pass attempts. They’re a legitimately terrible team on the offensive end of the rink.

With 57 seconds left in regulation Alex DeBrincat found the empty net to extend the lead to two. Detroit was trying their hardest to put pressure on the Blackhawks’ defense but they weren’t capable of completing much, if anything.

Lankinen stopped all 29 shots he faced to earn the first shutout victory of his NHL career. Bernier was solid on the other end of the ice and deserved a better decision… but the Red Wings suck.

Boqvist had two shots on net in 12:50 on the ice in his return from COVID protocol. Carpenter led all Blackhawks skaters with five hits in 14:55 in his return as well.

Nikita Zadorov had himself a night. In 20:40 he was credited with three shots on net, a team-leading four blocked shots and one hit. Calvin de Haan led the Hawks defensemen with four hits.

DeBrincat led the team with six shots on net and two takeaways.