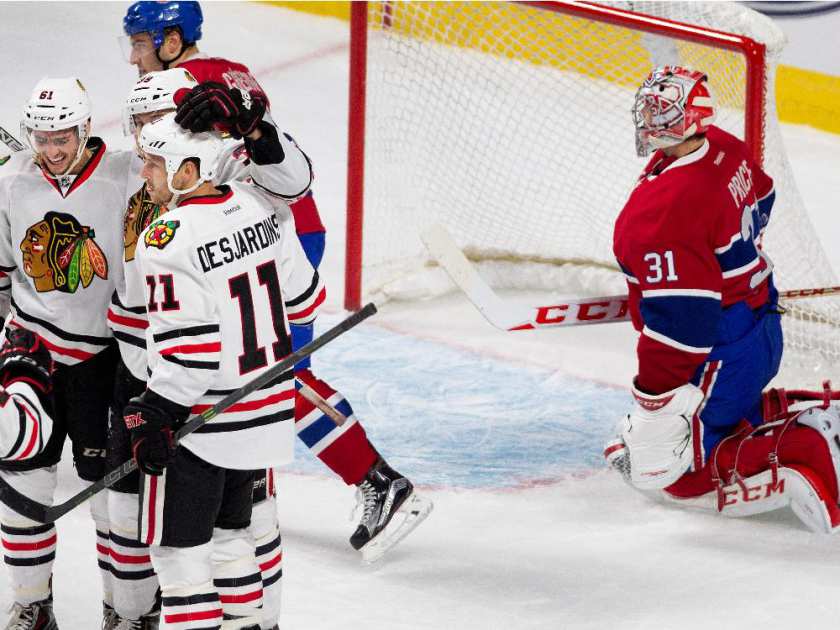 When the rosters were announced for Friday night’s game in Montreal, most honest onlookers gave the advantage to the Habs.

Chicago brought a roster of mostly players headed for Rockford (or, in some cases, free agency), while Montreal was starting Carey Price. At home.

It didn’t take long for the young Hawks to throw any assumptions out the window, however. In a span of 5:07 in the first period, the Hawks beat Price three times to blow the game open.

Ryan Garbutt started the parade, redirecting a David Rundblad shot past Price for a power play goal. Less than two minutes later, Garrett Ross tipped a beautiful pass from Kyle Baun into the net to extend the lead to two. And just over three minutes after assisting on Ross’ goal, Baun ripped a shot past Price to make the score 3-0 in favor of the defending champions.

Montreal got on the board 25 seconds into the second period when Zack Kassian beat Scott Darling, but that was the only tally for the Canadiens.

Baun added his second goal of the night at 3:02, redirecting a pass from Andrew Desjardins over Price.

Jan Hejda scored a short-handed goal into an empty net to finish the scoring late in the third period.

Darling was good once again, stopping 22 of 23 in a complete game victory. Mac Carruth dressed as the backup.

But the story of the night was the play of Baun, who continues to impress. In 13:58, Baun was credited with five hits, four shots on goal and two blocked shots with three points (two goals, one assist). He used his size effectively, skated well and showed good hands around the net. Baun saw time on both the power play and penalty kill units in the game.

Desjardins and defenseman Trevor Daley had two assists each, and Ross added an assist to have a multi-point night as well.

Lubomir Visnovsky skated a team-high 21:58 and was credited with four blocked shots. David Rundblad blocked three shots and added an assist in 20:26, while Viktor Svedberg led the Hawks with five blocks in 21:08.