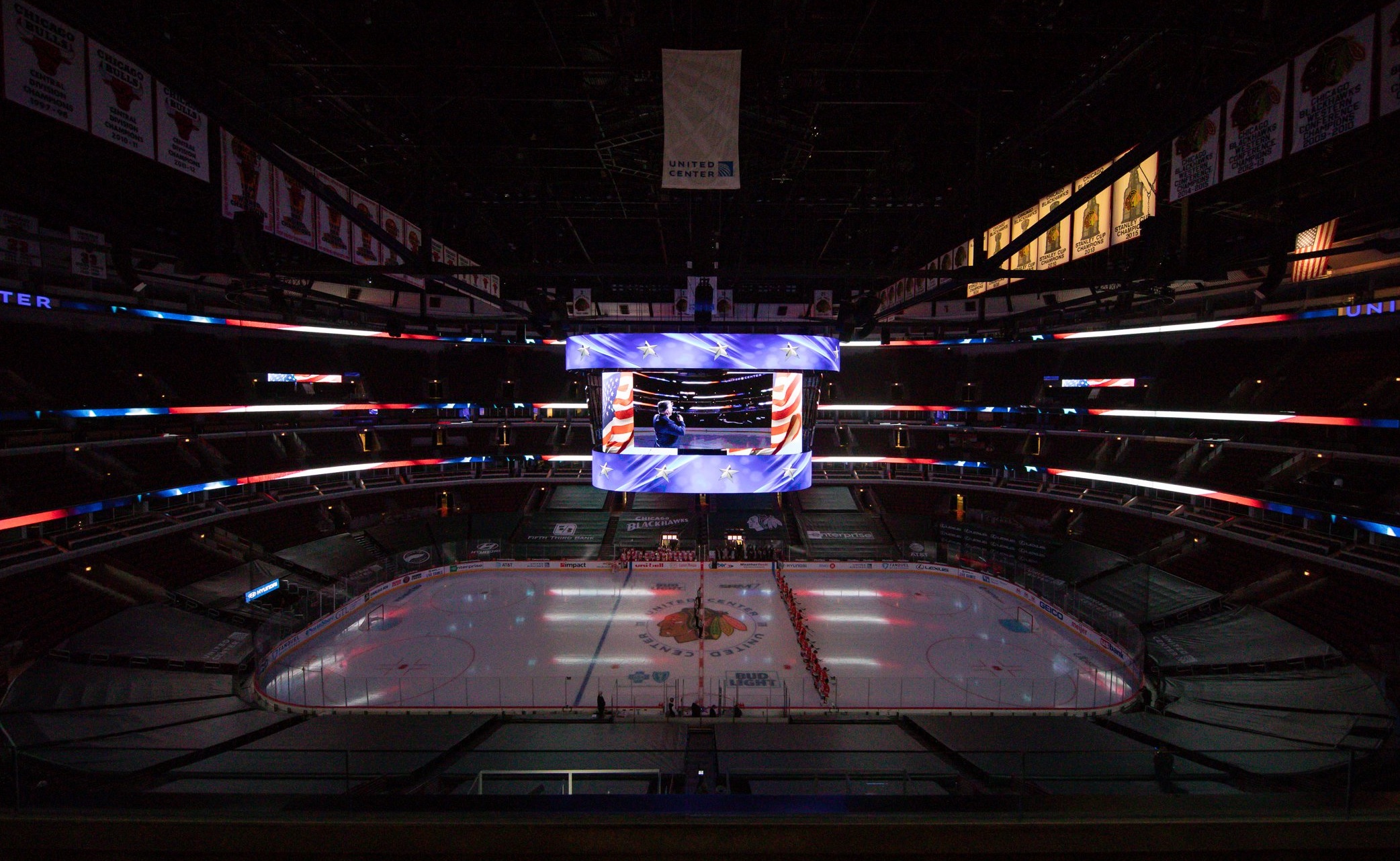 The Blackhawks came home with a record that would have warranted some less-than positive responses had there been fans in the United Center. Thankfully for them, the house was empty with the exception of some media members and a pretty red Lexus parked in the corner.

Kevin Lankinen got back between the pipes as the Hawks looked to shake off four ugly defeats. Detroit came in with two wins in four contests to start their regular season.

Before the game began, Chicago still went through the ceremonial introductions of players. It felt awkward and completely unnecessary given the empty seats. Brent Seabrook made an appearance and waved to those in attendance. Jonathan Toews was still nowhere to be found.

The Star Spangled Banner was performed… at an earlier time. It was artfully recorded with video added of fans cheering at home. For a building that usually rocks during the anthem on Opening Night, it must have been completely surreal from the ice surface while the anthem was being viewed.

When the game started, there were a couple early chances for both sides and then about six minutes of absolutely nothing. It wasn’t until Valtteri Filppula went to the box for Adam Boqvist at 12:16 into the first that the wheels starting to move for Chicago.

After not having a lead for more than 71 seconds in four games, the Blackhawks got on the board first. Patrick Kane was on the scoring end of the power play marker to give Chicago a 1-0 lead.

Alex DeBrincat and Dylan Strome were credited with assists on Kane’s third of the young season.

The Blackhawks successfully killed a penalty while holding onto the lead and went to the room with a lead after 20 minutes. Chicago out-shot Detroit 12-10 in the first period and had to feel pretty good about getting and keeping a lead.

Chicago decided to hand deliver chances to the Red Wings as often as they could in the second period. You know, just to keep things interesting.

David Kampf went to the box 55 seconds into the period. Chicago killed it off.

Kane then went to the box at 4:54 for sharing a few colorful words with the officiating crew. The Hawks killed that penalty as well; actually, Michael Rasmussen killed the penalty when he was sent off for Detroit 38 seconds into the advantage.

Both sides handled their business while Kane and Rasmussen were in timeout, but Calvin de Haan extended the Blackhawks lead to two just 21 seconds after the Rasmussen penalty expired.

Ian Mitchell and Strome picked up the assists on de Haan’s goal.

Adam Boqvist went to the box at 15:31 to give Detroit its third power play of the second period. The Hawks were perfect against the Red Wings’ power play at the end of 40 minutes, and took a 2-0 lead to the room.

The only reason the Hawks were still leading by two was terrific work by Lankinen. He made a number of high quality saves, especially in the final four minutes of the period, to hold the lead. Detroit out-shot the Hawks 12-5 in the second period but Lankinen was up to the challenge.

Ryan Carpenter came into the game averaging 12:15 on ice per game through four games. He was already at 11:19 through two periods – and looked good. Carpenter was credited with two shots on net, two blocked shots and two hits in two periods, one of the more active box score participants through 40 minutes of hockey.

Mitchell was held to 8:58 on the ice in the first two periods, more than two minutes less than Boqvist as the lowest on the blue line for the Blackhawks.

Dominik Kubalik and Connor Murphy were tied for the team lead with four shots on net each through two periods.

The Hawks killed off yet another Detroit power play early in the third period before Danny DeKeyser returned the favor and took a seat himself. Andrew Shaw was at the end of a nice line of passing and made the deposit to give the Hawks a stunning 3-0 lead.

Kane and DeBrincat were credited with the assists on the Shaw goal; they joined Strome with two points in the game at that point.

The two sides skated in circles for the next six minutes, but the next goal came from Detroit. Lankinen’s shutout bid came to an end at 12:22 into the third when Dylan Larkin beat Mitchell around the edge and patiently waited for Lankinen to give him an angle.

Chicago’s lead was down to two with more than seven minutes left in regulation.

Because nothing can be easy, Nikita Zadorov went to the box at 15:20 to give Detroit yet another power play opportunity – their fifth of the night. Carpenter stole the puck in the Detroit zone and almost got a shot off in the middle of the penalty.

Detroit sent Thomas Greiss to the bench for an extra attacker while on the power play. Murphy got the puck to Mattias Janmark who was able to get the puck into the empty net to give Chicago a three-goal lead in the closing minutes of regulation. The short-handed, empty net goal is the first for Janmark with the Blackhawks.

Tyler Bertuzzi exchanged slashes with Murphy during the penalty and got enough on his next attempted slash after the penalty ended to get the rest of regulation off. The Blackhawks got a late power play and almost got a fifth goal as Kane set up DeBrincat; Greiss made a nice save.

In the first of many battles for the basement this season, the Blackhawks got into the win column.

Lankinen was superb. He stopped 30 of 31 shots on home ice.

Zadorov was credited with six hits and five blocked shots in 17:14, leading the Blackhawks in both categories.

Mitchell was held to only 13:29 but blocked two shots and picked up an assist. He did get nine seconds of power play ice time, though. Baby steps?

Strome had two assists in 15:22 but won only two of 10 at the dot. The Blackhawks didn’t have a single forward over 20 minutes in the game.