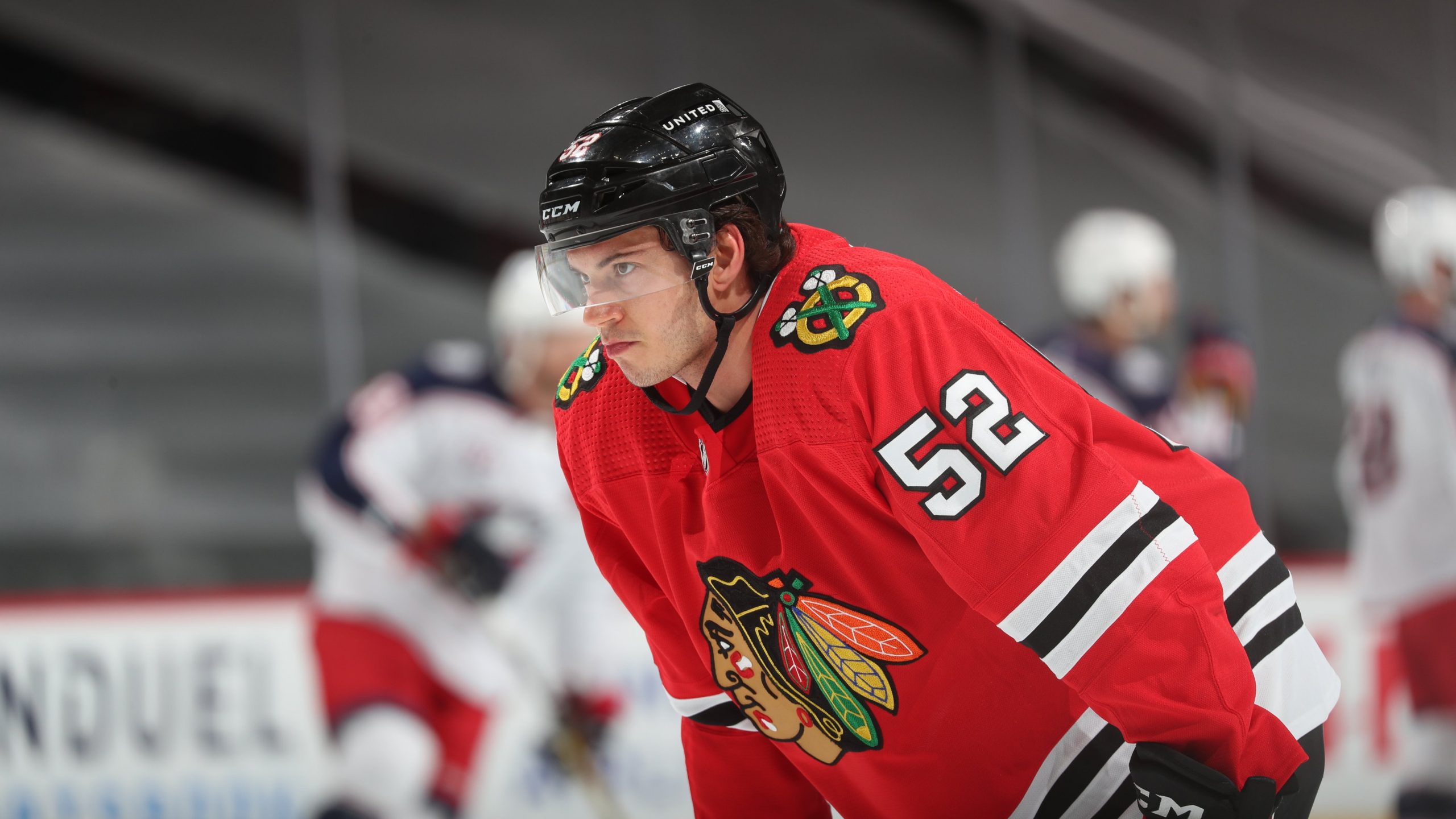 With five players on the COVID-19 Protocol list, the Blackhawks needed to made some lineup adjustments. Matthew Highmore was back in the lineup and another young player made his NHL debut.

Forward Reese Johnson was inserted into the lineup; the Hawks would go with the standard 12 forwards and six defensemen after rolling out seven defensemen in two straight games.

So what happens when you go back to “only” six defenseman?

Lucas Carlsson was stung by a shot just above the knee on his first shift. He struggled to get to the Hawks’ bench, tried to give it a go on a second shift but came back quickly and went straight to the room.

#Blackhawks defenseman Lucas Carlsson struggled to exit the ice after blocking #CBJ Vladislav Gavrikov’s shot with his left knee. Carlsson took one shift then went to the dressing room. pic.twitter.com/KmOaBVCne5

Johnson looked really good early in his first career NHL game, attacking the puck and making things difficult on the Jackets on each of his first two shifts.

Carlsson got some attention but was able to return to the lineup later in the first period.

In the middle stages of the period the Blachawks got a 3-on-2 rush. The puck found Philipp Kurashev on the doorstep and the rookie tapped it home for his third career NHL goal. Chicago led 1-0.

Mattias Janmark and Patrick Kane were credited with the assists on the Kurashev goal at 12:32 into the first.

With 2:32 lef tin the first, Columbus attacked the net. Jack Roslovic slammed the puck on net and Boone Jenner followed to slap home the rebound. We were tied at one.

At the end of 20 minutes the Jackets had a 11-7 shot advantage. Columbus carried the play in the final five minutes of the opening period.

With Carlsson limited in the first, Ian Mitchell skated 6:38 in the period. There were no penalties called so more open ice and even strength time opened up opportunity for Mitchell.

It took only 50 seconds in the second period for the arm to go up on the first penalty of the game. Chicago went to the power play as Zach Werenski took a seat for holding.

The Blackhawks had some terrific looks at the net in the first minute of the advantage but Elvis Merzlikins was able to keep the puck out of the net. Chicago did not score on their first power play of the night.

Both goaltenders continued to make big saves and the score remained tied. Chicago went back on the power play later in the period. Seth Jones was able to spend a couple minutes considering his actions starting at 12:30 into the second.

The second power play wasn’t nearly as active as the first but the Hawks have a couple good looks. Nothing happened and the game continued tied.

Johnson baited Dean Kukan into offsetting minors and the teams went to 4-on-4 with juts under four minutes left in the second period. Nothing happened here, either.

Dominik Kubalik went to the box at 18:30 into the second, giving Columbus their first power play of the evening. Lankinen made a few huge saves with heavy traffic in front of him in the final ten seconds of the period and Chicago was able to escape the period tied at one.

The Blackhawks out-shot the Jackets 16-10 in the period but neither team scored. Chicago was 0-2 on the power play; Columbus had 30 seconds remaining on their first power play to open the third period.

Duncan Keith had a team-high five shots on net in 16:54 through two periods. Mitchell was credited with one shot on net in 11:04 through two. Johnson had a team-leading six hits in 8:08 in the opening 40 minutes.

Pius Suter was replaced as the top line center by Kurashev to start the night after a couple quiet games. He was at a wing on the second line to open to the game, but Brandon Hagel got some run with Dylan Strome and Dominik Kubalik early in the third period. Suter found himself stapled to the bench.

So how does a younger player respond? Suter got on the ice seven minutes into the third and went after the puck. When Merzlikins screwed up his attempt at playing the puck, Suter shot it off the backside of Columbus’ netminder and into the net to give the Hawks a 2-1 lead.

With his fourth goal of the season, Suter took the lead among NHL goalies. Kurashev, who also scored on Sunday evening, is tied for second with three.

Chicago wasn’t done. Once again Merzlikins had issues handling the puck and the turnover wound up behind him in the net. This time the goal came from the stick of Kane at 13:40 into the third.

Kurashev picked up the assist on Kane’s goal, giving him a two-point night.

With 4:09 left in regulation and Chicago leading by two, Andrew Shaw was sent off for a couple minutes for hooking. A less than ideal time to put your team short-handed.

Columbus emptied their goal with 43 seconds left on the power play after the Hawks cleared the puck the length of the ice. With the extra skater and the man advantage, the Jackets weren’t able to score. The penalty expired without a goal.

Columbus kept the extra skater on the ice but weren’t able to generate another quality scoring chance. Chicago picked up the regulation victory.

It was a good night for the youngsters in Chicago’s lineup.

Lankinen made 32 saves against 33 shots in another superb effort.

Kurashev won six of 10 faceoffs and had two points in 14:03 on the ice. He had a good night on the line with Kane.

Johnson finished his debut with seven hits and one shot on net in 10:56.

Mitchell was plus-three with two shots on net in 15:56.