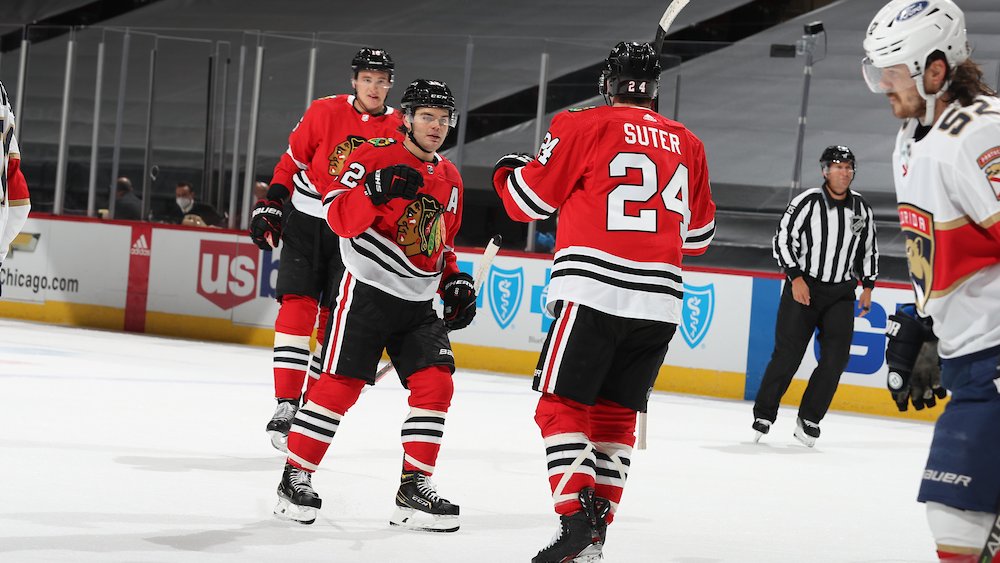 The Blackhawks finally returned to the United Center after a brutal road trip that ended with four consecutive losses. Chicago needed to bounce back, but the visitors waiting for them weren’t going to do them any favors.

Joel Quenneville and his Florida Panthers were in town, which worked out incredibly well for the pregame ceremony. Patrick Kane started the road trip with his 1,000th career regular season game and the Blackhawks had a brief ceremony with his family, girlfriend and son. The only member of the Panthers on the bench for the moment was Quenneville, whose first game back in Chicago happened to be after Kane’s 1,000th career point.

Chicago made one roster change for the game. MacKenzie Entwistle made his NHL debut in place of Reese Johnson. Florida was without Alexsander Barkov, who tried to warm up but couldn’t go because of a lower body issue.

When the puck dropped, the Hawks needed to go to work. Their early passing wasn’t pretty and they struggled to exit the zone effectively, but the defense held up its end of the bargain.

A little more than six minutes into the game, Brandon Hagel took the puck away in the neutral zone and attacked. He left a beautiful feed for Dominik Kubalik who tapped in his 11th of the season.

Hagel and Connor Murphy picked up the assists.

The Blackhawks failed to score on their first power play of the night but kept holding their own against a Panthers team that put it on them pretty well not too long ago. Inside the final two minutes of the period, Pius Suter parked himself in front of the net and was able to redirect a Nikita Zadorov shot into the net to extend the Hawks’ lead to two.

Kane picked up an assist with Zadorov.

When the horn sounded at the end of one, the Hawks had done a few things they hadn’t done much/at all on the road trip. The Hawks were over 50 percent at the dot and out-shot the Panthers 11-7 in the period.

Now could they hold onto a multi-goal lead?

Owen Tippett took a terrible penalty three minutes into the second period and the Blackhawks took advantage. Carl Soderberg scored his sixth of the year on the power play to give Chicago a 3-0 lead.

Kane and Alex DeBrincat were credited with the assists on the Soderberg goal. The two assists for Kane were significant historically.

Kane's 2nd helper for the #Blackhawks tonight on their 3-1 goal vs FLA has given him 665 career assists, passing Mark Recchi for the 4th most among wingers within their first 14 NHL seasons. Only Jaromir Jagr (772), Jari Kurri (731) and Guy Lafleur (728) own more by that criteria https://t.co/iuzV3JNQBi

Florida got on the board four minutes later when Noel Acciari made a really nice pass through traffic to set up Anton Stralman.

Any nerves fans had about a 3-0 lead evaporating into a blowout loss were calmed by the next ten minutes from the Hawks. Shift after shift, the Hawks attacked in waves. They killed a penalty easily in the middle of the period and had extended zone time on a couple occasions. The Blackhawks dominated the final 11 minutes of the second period so much there were nine individual shifts by Florida Panthers skaters that lasted more than two minutes in the period.

After 40 minutes, Chicago held a 3-1 lead on the scoreboard and a 25-21 shot advantage. Lankinen was solid, the defense in front of him was improved and the offense was much more aggressive.

Late in the period, a couple Panthers took a few physical liberties with Hawks skaters. Zadorov and others didn’t leave those hits without at least letting the opponents know they saw them, if not a few shoves around officials after a whistle. The Hawks showed more push-back from physical play in those moments than they had in the previous two weeks.

Eight days ago in Florida, the Blackhawks had a 3-1 lead on the Panthers. They gave up two quick goals late in the second period to tie the game and Florida then scored three unanswered in the third period to make a close game into a blowout. Would the Hawks continue their strong play for 20 more minutes in this game?

Almost seven minutes into the third period, Lankinen made a series of ridiculous saves to keep the lead at two. Aaron Ekblad could have easily scored once, if not twice, during the sequence. Chicago was able to clear the puck but while the two teams were changing Zadorov crosschecked Acciari in the lower back. No penalty was called but Acciari needed assistance getting off the ice and appeared to be favoring his back.

Florida cranked up the pressure in the middle of the period but Lankinen continued making good saves. Chicago was spending more time in the wrong zone and were fortunate their netminder was on point.

Zadorov went to the box at 14:26 and Quenneville was surprisingly desperate. He pulled his goaltender for an extra attacker while on a power play with more than five minutes left in regulation. Less than 60 seconds into the advantage it paid off. Alex Wennberg made an impressive play to kick the puck to his stick by the side of the net and beat Lankinen around the post to cut the lead to one.

With 2:39 left in regulation, Quenneville pulled his goaltender again – this time at even strength. Chicago won the faceoff and was able to get the puck up the ice. Mattias Janmark got a step on Eklbad who slashed him to protect the empty cage. So with 2:29 left on the clock, the Blackhawks got a power play.

The Blackhawks were happy to pass the puck around the perimeter. Adam Boqvist made one terrific pass to Soderberg who almost scored, but beyond that one opportunity the Hawks made more effort to control the puck than score.

Inside the final ten seconds of regulation, Calvin de Haan had a brutal turnover that turned into a 2-on-1. Murphy laid out and broke up a potential scoring chance for Wennberg and Lankinen was able to freeze the puck with 4.9 seconds left.

The Hawks were able to keep the puck from ever leaving the dot after the final faceoff and the clock expired with Chicago ahead.

Lankinen was superb behind the skaters. He stopped 33 of 35 on the night to preserve the victory and get Chicago back in the win column after four ugly losses. Florida out-shot the Hawks 14-7 in the third period.

Entwistle skated only 6:03 on 12 shifts but was credited with three hits and two shots on net in his NHL debut.

Ryan Carpenter won eight of nine at the dot. Dylan Strome won six of nine and Carl Soderberg won seven of 12. Of course it helped that Barkov wasn’t on the ice, but the Hawks were better in the faceoff circle.